Reconstruction of Humboldt Blvd. is a Generational Opportunity

Latest plans from the city look good, but protections for bicyclists could make them great.

By Dave Schlabowske, Bike Federation of Wisconsin - Feb 28th, 2020 02:52 pm
Get a daily rundown of the top stories on Urban Milwaukee

Green bike lanes were added to sections of Humboldt Blvd when they were resurfaced back in 2014.

Our streets get patched, repaired and repaved all the time, but they only get reconstructed once every 50 years or more. Reconstruction includes new curb and gutter, opportunities to make major improvements to underground utilities, and can even involve changes to the right of way. This is the chance to widen or narrow, straighten or curve, to make big changes.

Any major reconstruction project is a generational opportunity to reimagine how we want to move people and goods through that corridor. It is a time when we can make geometric changes in the roadway that can improve safety for all users, increase property values and make the street a more pleasant place to live, work and do business.

Reconstruction projects are an opportunity to look at how a street reflects our values, since the cumulative effect of the many seemingly isolated changes we make to our City infrastructure will have long-reaching impacts on our environment, economy and quality of life. That sounds dramatic, but consider how our investments in the urban freeway system had the unintended consequences of contributing to divided communities, pollution, health problems, and sprawl. What if instead we had solved the problem of moving people faster and more efficiently with a robust transit system? Hindsight, but we can learn from the consequences of our past decisions.

Humboldt Boulevard is arguably the longest and most important street in Milwaukee’s Riverwest neighborhood. It is a key route for businesses, residents, students and workers. It is a vital route for people who bike, bus, drive and walk. Running along the Milwaukee River, it has an outsized impact on the environment and access for fishing and recreation. How it relates to all those things have changed a lot since it was last rebuilt in 1965.

The last opportunity the public had to reimagine Humboldt was back in February of 2018 at the initial Public Involvement Meeting #1 (PIM) for the reconstruction project. The early concept plans presented at that first meeting posed no transformational changes, but did suggest slightly wider motor vehicle travel lanes, and a slightly narrower center median. Residents pushed back and asked instead to maintain as much green space as possible, narrow motor vehicle travel lanes to reduce speeding, and make it easier and safer for people to cross Humboldt.

Is What We Asked For Then What We Want Now? 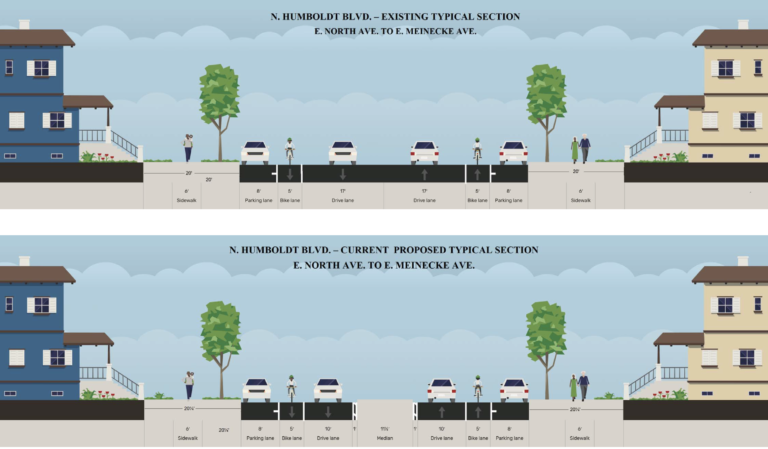 A cross section of Humboldt showing the DPW proposed geometric changes for the segment from North to Meinecke was on display at the PIM. 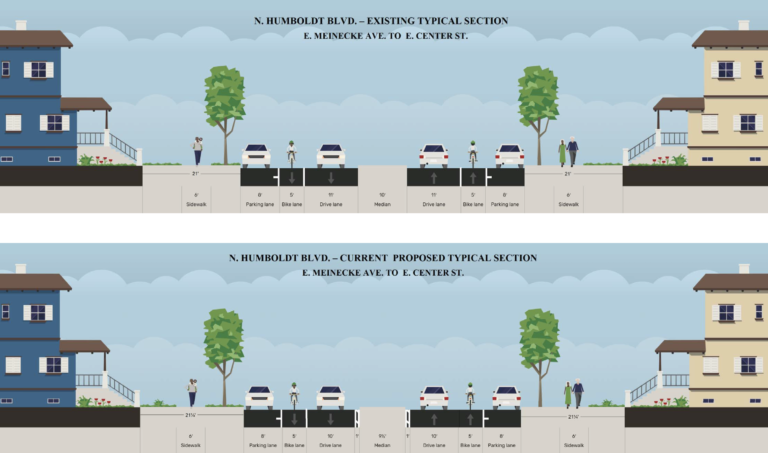 A cross section of Humboldt showing the DPW proposed geometric changes for the segment from Meinecke to Center was also on display at the PIM. 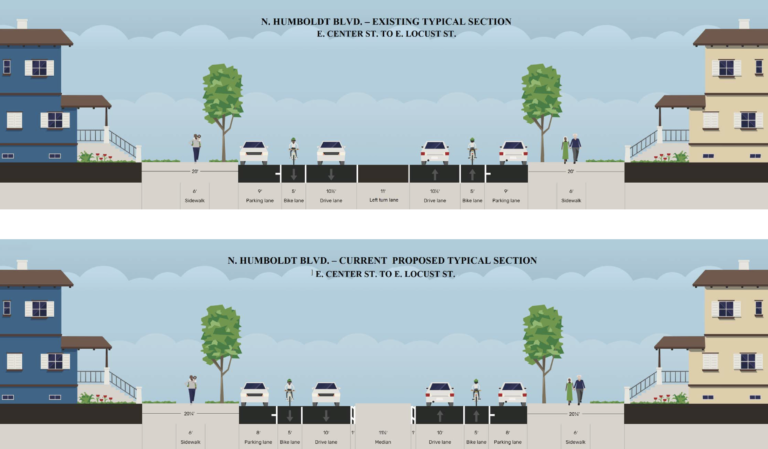 A cross section of Humboldt showing the DPW proposed geometric changes for Center to Locust was also on display at the PIM. 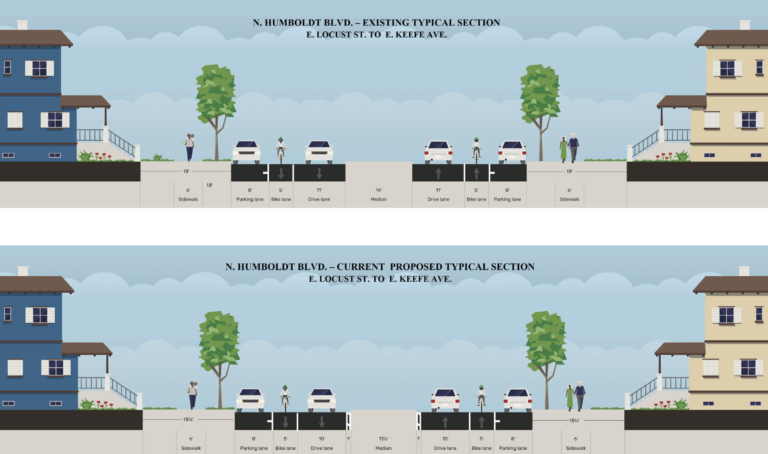 A cross section of Humboldt showing the DPW proposed geometric changes for the segment from Locust to Keefe was on display at the PIM.

All of those are just proposals. Everything has to be approved yet, and some things might not, but there is lots of good stuff in this project. Essentially, the engineers showed designs that were responsive to the comments they received at that initial meeting two years ago and were thoughtful about the potential to do needed underground work cost effectively in conjunction with the reconstruction project.

The people spoke, the City listened, so what is the story here? Well, a lot has changed in two years. People are much more concerned about speeding and reckless driving now. Even traditionally fearless bicyclists like me now minimize riding on streets out of concern for reckless, speeding drivers and the “Milwaukee Slide.” And the Department of Public Works has reorganized and now has a multi-modal section with expert staff that specialize in transportation planning for people who walk, bike and take transit. Why not let those experts take a fresh look at this project relative to current safety concerns? 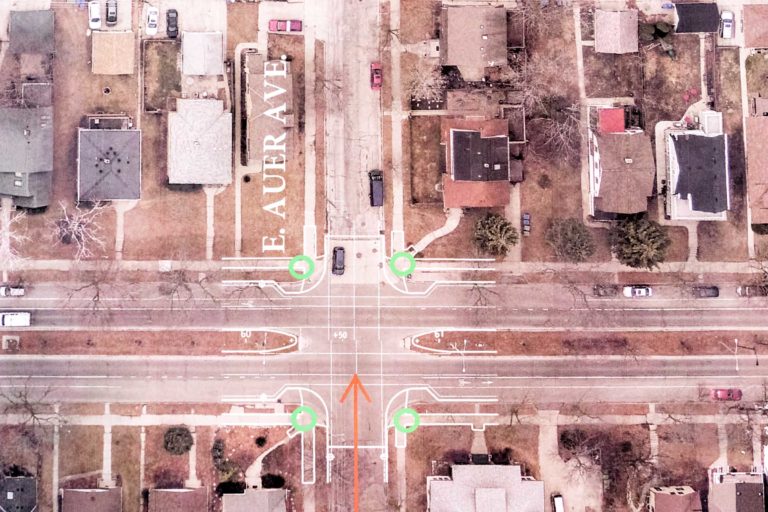 We can have safety and green space

This is the proposed cross section that I created using Streetmix.com. My alternative includes protected bike lanes and maintains a planted median.

Looking at the existing right of way, I think it would be possible to reconstruct Humboldt with curb protected bike lanes as shown in my Streetmix.com design above. The engineers might be able to move the bike lanes between the parking lane and the curb, and construct three foot planted medians between them. This design would require taking at six feet from the 13 ft to 14 ft planted median.

But slight variations on this design might have even less impact on the center median. Perhaps the curb separations are only at the beginning and end of each block and bollards are used in between? Maybe it is only a two foot buffer zone, and plantings are in the ends by the curb extensions? The design goal should be to provide a protected lane and save the existing trees in the center median and have no net loss in green space. Just move the green space from the center median closer to where people walk and bike.

Even if it might cost more now and negatively impact the project timeline, if we have any second thoughts about this design, now is the time to consider making changes. There is a vocal group of City residents who believe it is possible to design Humboldt Boulevard so it is even safer and more attractive for people who ride bicycles through Riverwest, the neighborhood with the highest bicycle use in Milwaukee.

Having worked for DPW, I understand how difficult it can be to change direction on a project that has undergone two years of planning, so I don’t suggest this flippantly. But perhaps it would be prudent to hit the pause button and ask the engineers and planners at the Department of Public Works to show us another option that includes protected bike lanes, along with the cost implications and other tradeoffs involved. It might be we decide to stick with what has been proposed, but isn’t it worth at least having the discussion now?

Dave Schlabowske is the former executive director of the Wisconsin Bike Fed.

2 thoughts on “Op Ed: Reconstruction of Humboldt Blvd. is a Generational Opportunity”