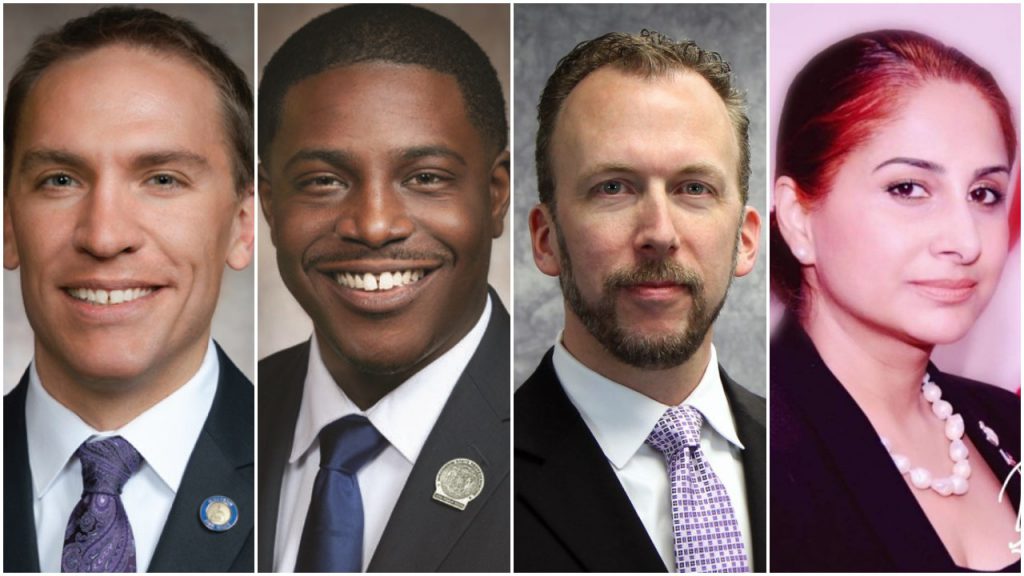 Four candidates are running for a four-year term as Milwaukee County Executive.

The top two vote-getters in the primary will advance to the April 7th general election. The winner will replace Chris Abele, who announced in October he would not seek re-election.

As a lifelong resident, Rep. David Crowley knows as well as anyone that Milwaukee County is truly a tale of two different counties. He has lived through many of the economic and racial struggles that residents across this community face every day. He has also experienced the joy of members of the community coming together to take care of one another and make life better for us all.

Growing up in a working-class family in Milwaukee’s 53206 neighborhood, David was no stranger to hardship. As a child, David’s family moved around frequently, often as a result of evictions. He lived in a home with multiple family members who suffered from mental illness and drug addiction, and saw first-hand the impact that these issues have on our community. He knows the importance of making sure that Milwaukee County residents are able to access treatment and support.

David credits the Milwaukee youth organization Urban Underground for saving his life. He found a support network and a community of people that cared about him, which put him on the path to public service.

While still in high school, David served as a Community Justice Coordinator with Urban Underground, giving him his start in community organizing. He then joined AmeriCorps when he turned 18, and worked with several other community organizations including Project Return, Safe & Sound Inc., and COA Youth and Family Centers. David also worked as a legislative aide for the Milwaukee County Board and the Wisconsin State Senate.

David’s attention then turned to his own elected service, and he was elected in 2016 to serve Wisconsin’s 17th Assembly District, representing almost 60,000 citizens in the State Legislature.

In the Assembly, he has spent every day fighting to make sure that all our community’s residents have a steadfast advocate in the State Capitol. David Crowley has worked with legislators from both sides of the aisle to pass legislation that benefits not only the residents of his district, but people across Milwaukee County and the entire State of Wisconsin.

David is a member of numerous community organizations including the ACLU, Milwaukee Urban League Young Professionals, and the Milwaukee NAACP. He attended Bayview High School, the University of Wisconsin-Milwaukee and currently lives in Milwaukee with his wife, Ericka, and his three young daughters.

David is running for Milwaukee County Executive so that he can give back to the community that has given him so much. Whether it’s getting people to and from work, providing health care services, helping families find somewhere to live, providing recreational space, or maintaining public safety; county government directly affects the daily lives of every resident of Milwaukee County.

As County Executive, David Crowley will do everything he can to make sure that residents across Milwaukee County, no matter their background, get access to the services that they need and that taxpayers are getting value for their dollar.

State Senator Chris Larson attended the University of Wisconsin-Milwaukee and graduated with a degree in Finance and a minor in Political Science. Chris is the only candidate in the Milwaukee County Executive race with county supervisory experience, a finance degree, and political relationships in Madison to advocate and advance our county.

In 2008, Chris Larson successfully ran for Milwaukee County Supervisor on a platform of adequately investing in our shared parks and transit system. In his first year as a Supervisor, he led the coalition “Quality of Life Alliance” which successfully helped pass a countywide advisory referendum to fund our parks, transit, & emergency medical services with a 1% sales tax while reducing property taxes.

Larson pushed against the establishment and was elected to the Wisconsin State Senate on November 2, 2010 after defeating an incumbent from his own party. He was the youngest state senator upon his election. Just two years later, he was selected by his colleagues to serve as Senate Democratic Leader for the 2013-2014 Legislative Session.

In his time in the Wisconsin State Senate, Larson has fought for increased funding for our public education system, the removal of lead in our public water supply, and common-sense gun control reforms to keep our communities safe.

Larson was at the forefront of fighting against the attacks on workers in our state during Act 10 and against ALEC modeled RTW legislation, as well as the repeal of Prevailing Wage as a member of the Senate Labor and Government Reform Committee.

Chris was born in West Allis, raised in Greenfield, and has lived in Milwaukee County his whole life. He graduated from Thomas More High School, where he was captain of the Cross Country team and learned to love our County Park’s unique beauty by running and biking the Oak Leaf Trail.
An avid runner, Chris has successfully completed the Ironman Wisconsin triathlon and run over 30 marathons. He has a long-term goal of running a marathon in each state.
Chris lives in Bay View with his wife, Jessica, their children, Atticus and Stella.

Lipscomb was first elected to the County Board of Supervisors in 2008, won re-election in 2012, 2016, and 2018, and has been elected three times by his peers to serve as Board Chairman.

Lipscomb has regularly secured important park and parkway investments, improved bus routes and opposed cuts to critical public services. He also led efforts to protect the public transit system from privatization and profiteers. Lipscomb was a lead sponsor of the 2012 Ready to Work Initiative which resulted in over 500 Milwaukeeans being trained and placed in jobs with an average wage above $15.

Lipscomb works for the public interest and has fought for greater transparency in our government. Year after year, he has been one of the most active authors of budget amendments in order to ensure responsible and balanced budgets.

​Prior to becoming Chairman, Lipscomb served as Co-Chair of the Finance, Personnel and Audit Committee. He has also served on every standing committee of the Milwaukee County Board, giving him a wide degree of understanding of County budgets and services.

Lipscomb is a graduate of Marquette University High School in Milwaukee and an honors graduate of the University of Wisconsin – Milwaukee where he earned his bachelor’s degree in architectural studies and a certificate in urban planning. His studies included time abroad at Oxford Brookes University in Oxford, England and in Paris. He has continued his education with further graduate level studies in real estate finance and law, and has completed various professional certifications.

In addition to his public service, he has worked in both the non-profit and private sector, including running private businesses.

If we are to make Milwaukee County a better place to live, grow and raise a family, we must all do our part to change it. Our system is broken, and we deserve better. Our leaders are divided, and discord and blame are pulling people apart. Our neighborhoods face different challenges and not everyone experiences the same opportunity in life.

Purnima is an immigrant and a proud American citizen, with an extremely humble background. She is not a politician, but believes it is her duty to serve the community and has dedicated her life to do so.

Milwaukee County Deserve better. We need a County Executive with the education and experience to lead but knows what it’s like to face hardship. She is experienced managing both corporate and non-profit organizations.

After an accomplished career, she decided to focus on community. She started a non-profit dedicated to building US-India relationships which has helped our local businesses grow; create jobs; and promote diversity, culture & inclusion. Purnima founded IndiaFest, a popular local ethnic festival that brings communities together.

Purnima Nath represents the best part of Milwaukee and shares our values. We need Purnima as our next County Executive of Milwaukee.