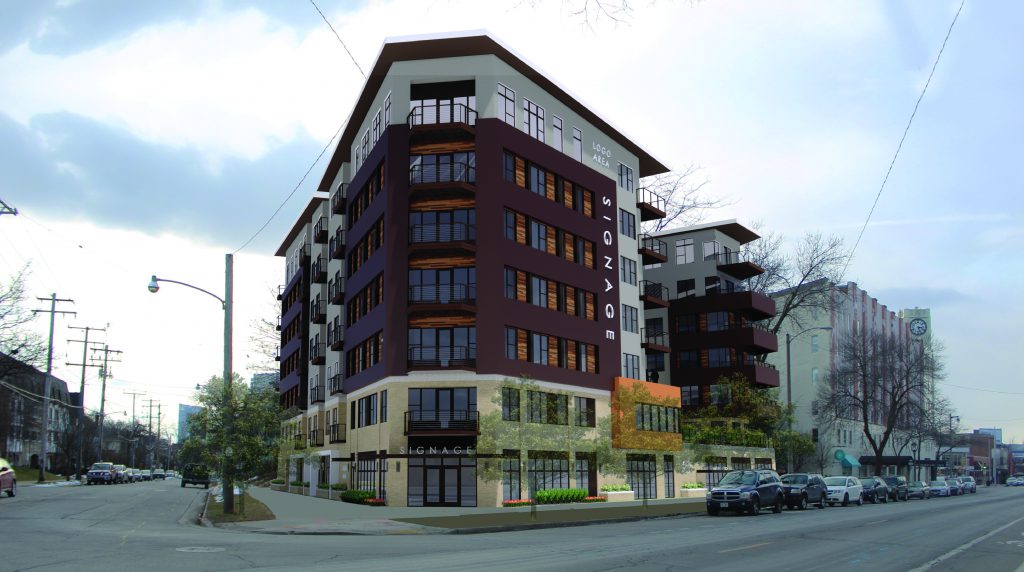 East Side residents got their first look Wednesday night at a seven-story apartment building proposed for a corner site at E. North Ave. and N. Summit Ave.

The market-rate building would contain 90 apartments with 110 parking spaces and a host of amenities including a two-story club room, theater room, fitness center and second-story green roof and deck.

Designed by JLA Architects, the actual developers are a secret so far. But they would purchase four parcels controlled by neighborhood resident Randy Bryant and demolish the structures on them.

JLA president Joseph M. Lee presented the plans to use “luxury class” finishes and construct unit sizes ranging from studios to three bedrooms. Rents would range from $1,000 to $2,500. He said the group would undertake considerable expense to put two levels of parking underground.

Concerns from attendees at a neighborhood meeting centered around the building’s Summit Ave. massing, traffic, and who is actually proposing the building.

“We need to know who they are because there are certain developers we can’t trust,” said Peter Kovac, father of area Alderman Nik Kovac who hosted the meeting at the East Library. A number of other attendees echoed his concern.

“They’re not developers,” said Bryant. But he said they’ve been involved in buildings people admire. “You have mingled with them, you know them.”

The younger Kovac described the secrecy as “highly unusual” and said he also didn’t know who the investment group is, but reminded attendees that the zoning change would dictate specific materials and building design constraints. He said an approved design could be sold to any developer and constructed. One such site is up for sale as such right now, the Goll Mansion and an authorized 27-story tower on the southern end of Prospect Ave.

The decision to hide the names was made to avoid backlash on social media said Bryant, who has rehabbed a handful of historic homes in the neighborhood.

Bryant said he’s been approached eight times in the past two years with development proposals for the two buildings he owns and he secured purchase contracts for the two other properties to control the site’s future.

“If you saw some of the other proposals you would truly not want the building,” said Bryant, noting that the proposed building reflects a number of conditions he imposed. Bryant said he was unsure if he would join the investment group in owning the final building.

A traffic engineering consultant hired by the investment group said the proposal would add a one to two second delay to the average trip through the T-intersection of N. Summit Ave and E. North Ave, not degrading the level of service to one needing remediation by the city. The building’s parking garage would be accessible via N. Summit Ave.

Multiple attendees pushed for study of new traffic lights or stop signs in the area in response to other new development and a need for better pedestrian safety. Kovac promised that regardless of the outcome of the project, his office would work with the Department of Public Works on the matter.

Many of the attendees, some of which identified as residents of nearby N. Summit Ave. properties, expressed concern that additional homes on the street could be redeveloped. Kovac said he would not support future development down N. Summit Ave., but noted he would not serve in his role forever. A handful of apartment buildings already break up the single-family homes and duplexes on the street.

The investment group needs a zoning change to unify the zoning of the four properties and allow greater density than the base zoning permits. Current zoning on the site would allow an 85-foot-tall, 23-unit building along E. North Ave. and two additional units on each of the Summit properties said a Department of City Development representative.

Renderings depict the new building similar in height to the adjacent Clock Tower Building, but attendees asked for renderings depicting the building in the context of the Summit Ave. perspective.

What comes next? The investment group could decide to revamp the proposal in response to feedback, as happened with the apartment building at 2900 N. Oakland Ave. where a second meeting was held, request the council vote on the project as is, or drop the proposal altogether.

Initial details about the project were first revealed last week after a zoning change application was submitted to the city. 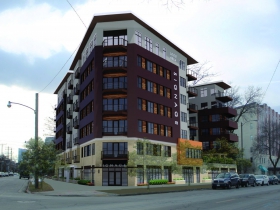 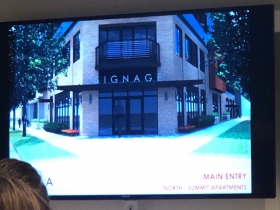 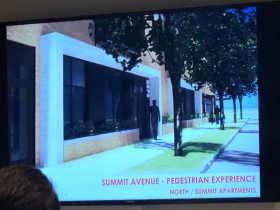 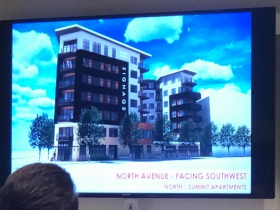 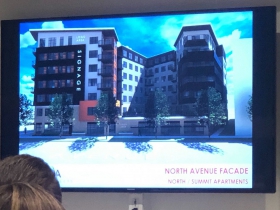 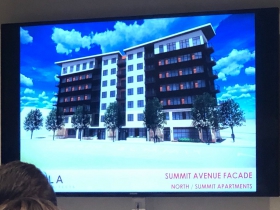 The properties to be razed include two nearly identical four-unit apartment buildings at 2231 E. North Ave. and 2239 E. North Ave. Bryant has owned both properties, built in 1943, since 2005. Two single-family homes, located at 2275 N. Summit Ave. and 2279 N. Summit Ave., would also be demolished. Both were built in 1889 and contain four bedrooms according to city records. 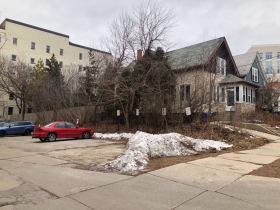 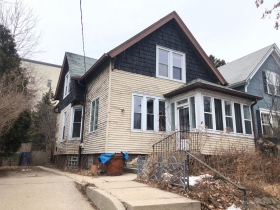 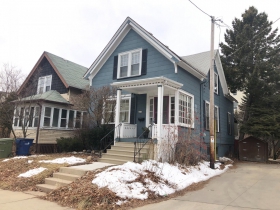 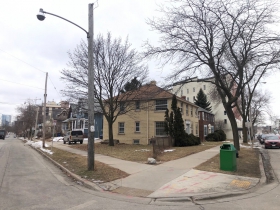 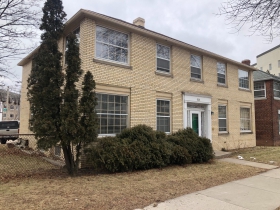 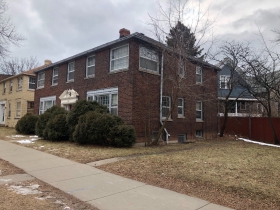 2 thoughts on “Eyes on Milwaukee: Neighbors React to New East Side Apartment Building”