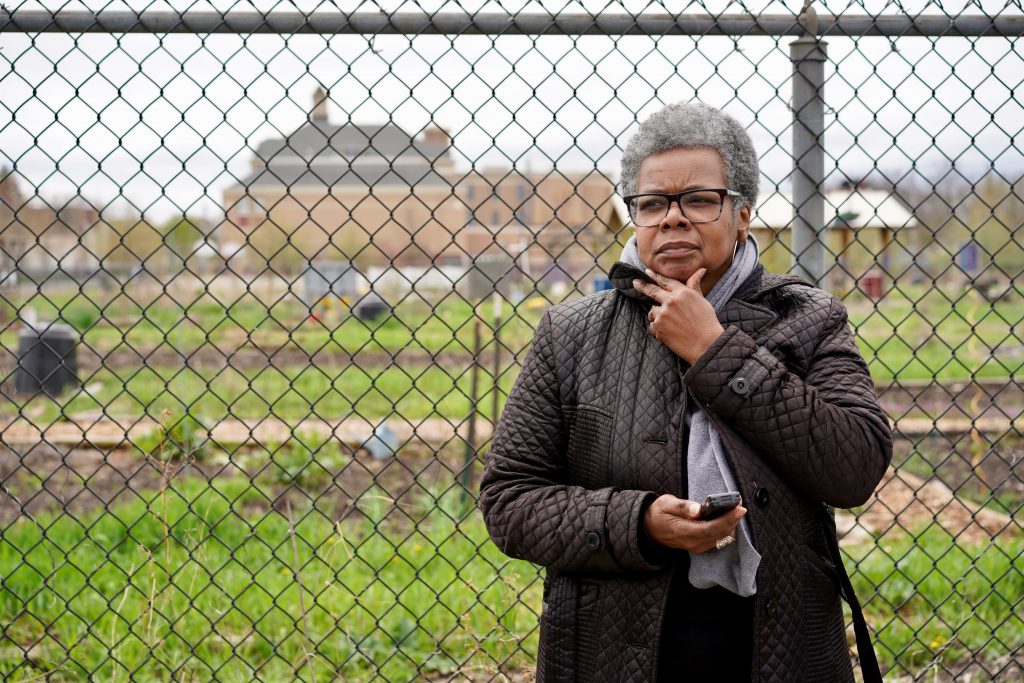 Sarah Noble pauses to reflect outside Alice’s Garden during the Milwaukee Civil Rights Bus Tour she organized in 2019. Photo by Adam Carr/NNS.

On May 6, 2019, the BeNoble Group organized a four-stop Milwaukee Civil Rights Bus Tour for progressive white leaders. The tour was designed to highlight the people, places and moments that made Milwaukee, that changed Milwaukee, and in many ways, caused Milwaukee’s current state for better or worse.

Guided by Milwaukee historian Reggie Jackson, we toured places that are mostly unmarked and too often unmentioned. My personal story lives at each and every stop, which began at America’s Black Holocaust Museum.

We traveled a short 1.4 miles from the museum, arriving at our first stop — the I-43 footbridge, on 7th and Ring Streets. The tour participants exited the bus single file, crossed 7th Street and entered the bridge to hear about the devastating impact of building the North-South Freeway in the 1960s, right through the heart of the black residential district. Over 8,000 homes were torn down to build the freeway. 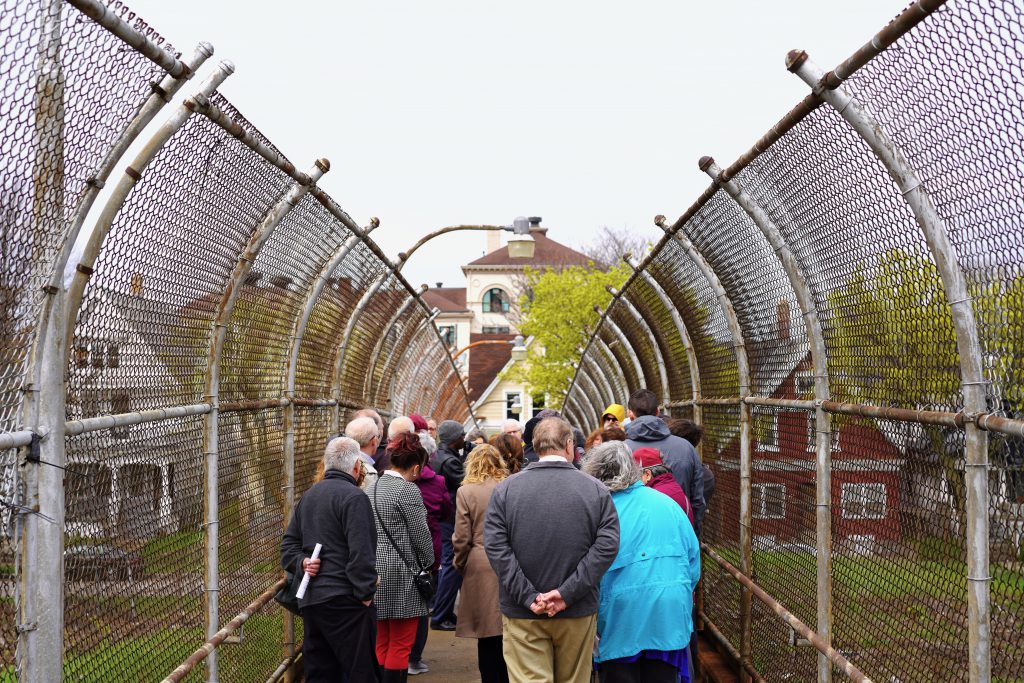 Standing above the I-43 on the 7th Street footbridge, the tour group listens to historian Reggie Jackson. Photo by Adam Carr/NNS.

Our second stop was A.O. Smith, a manufacturing facility that employed about 8,000 people in the 1970s. It was nationally known for manufacturing car frames for big carmakers like Cadillac, Chrysler and Ford. It was also known as a good wage employer who hired black men. The availability of such manufacturing jobs helped to grow Milwaukee’s black population from roughly 8,000 in 1940 to over 105,000 by 1970. 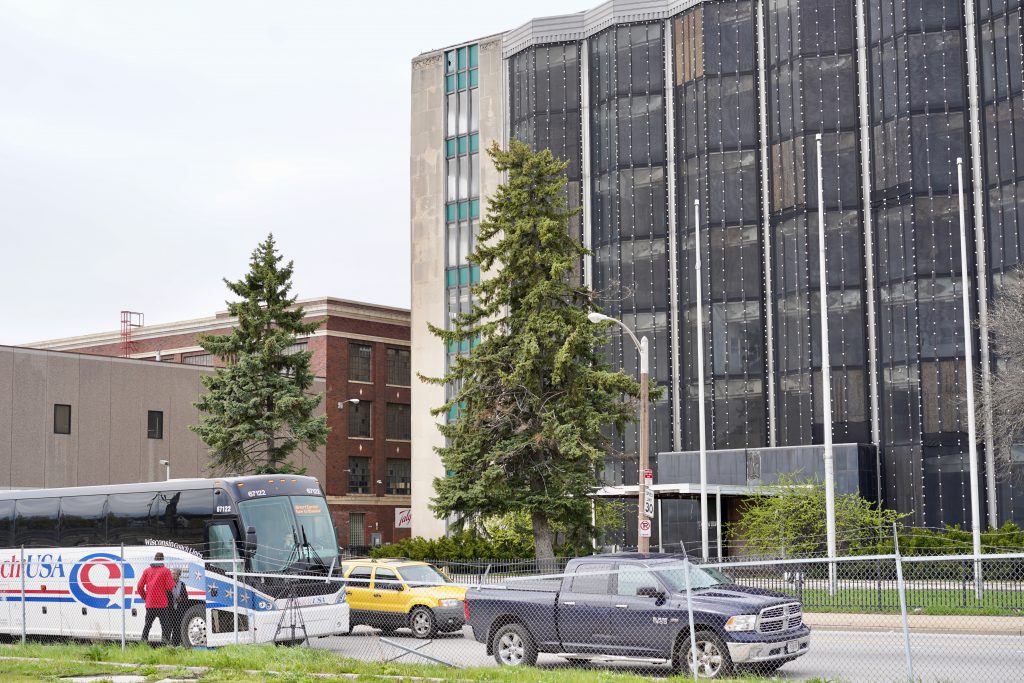 The bus parks across from the former A.O. Smith Research and Development Building. Photo by Adam Carr/NNS.

I can name men who worked those manufacturing jobs — men whose lives intertwined with mine and those closest to me. Each and every one of them counted their job as an immeasurable resource — a lifeline to better for themselves and their families. Their labor afforded them far more than meeting the day-to-day need of putting food on the table or their ability to pay rent. It also afforded them opportunities to invest in businesses, to build assets through homeownership, and with great pride — to send the next generation, and likely the first, to college.

Stop three — we stood quietly at the intersection of 17th Street and Fond du Lac Avenue, in a neighborhood described as one of the most distressed communities in Milwaukee. A freeway construction project planned there over 40 years ago resulted in the destruction of 1,600 homes, followed by disinvestment in a neighborhood that already had its share of challenges. It lost a larger percentage of residents than any other neighborhood in the city. Reggie called it the epitome of the destructive forces of public policy. 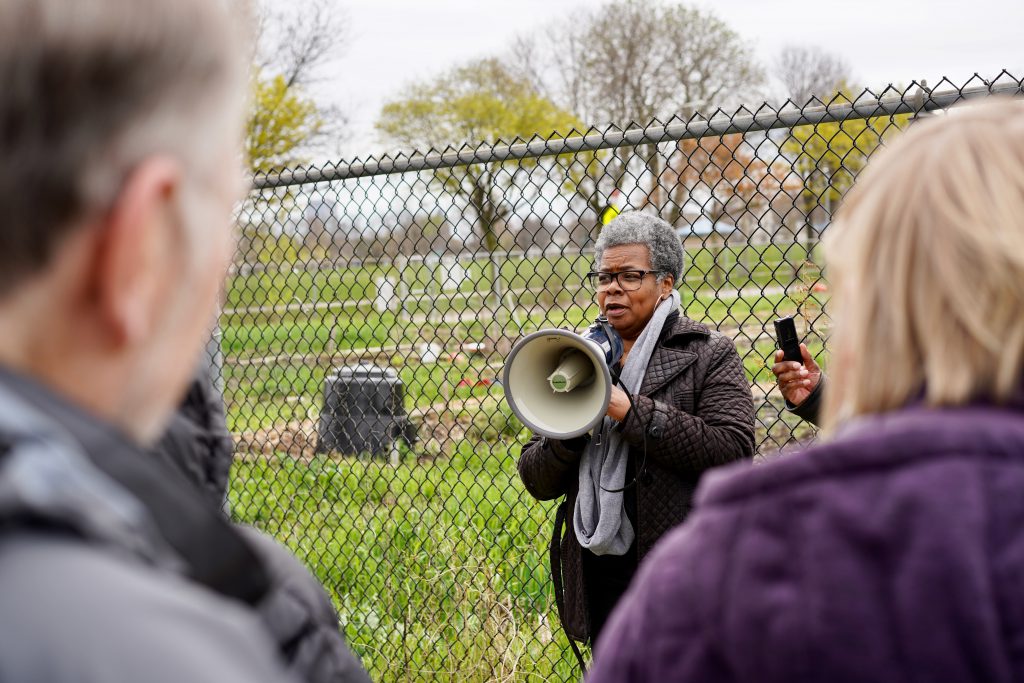 As we returned to the bus, Reggie pointed at the Columbia Savings & Loan building and mentioned its role as a black banking institution, providing mortgage loans to black families who couldn’t get approved at white banks. My family was among those who had housing stability because we had a home mortgage with Columbia Savings & Loan.

Our last stop, before returning to the museum, was the 16th Street Viaduct. In 1962, then Alderwoman Vel Philips introduced a Housing Ordinance Bill that would outlaw housing discrimination. By August of 1967, she supported an Open Housing Campaign led by the NAACP Youth Council and Father James Groppi, a Catholic priest at St. Boniface Church. They protested both forced and mandated housing segregation. The Civic Voice, an opposition group, filed a petition signed by more than 27,000 people that called on the Common Council to adopt a resolution to block open housing laws. Undaunted, campaign leaders pressed on even after being met by violent attacks from white protesters as they crossed the 16th Street Viaduct to the city’s South Side. They marched for 200 straight days! 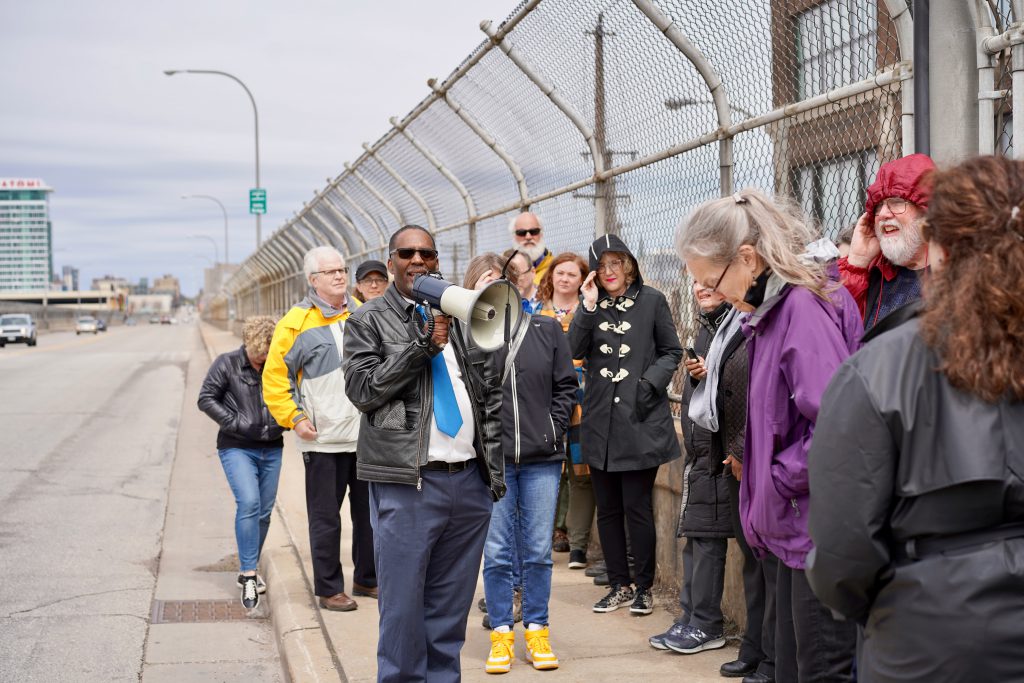 As a St. Boniface Church member and student, I was deeply connected to every moment of those 200 days. I was in awe of and admired members of the NAACP Youth Council, the Commandos and every leader who raged against injustice. They were ever present at my school, my church and in my neighborhood. They were my community. One of my most cherished memories of the time is of Father Groppi coming to the school playground, during recess. Though it was never said, I believe that his timing was always intentional; that he wanted to see me and every other child jumping rope, playing tag and hopscotch; that he wanted to be able to recall, at a moment’s notice, my face and the faces of all of my classmates; that he wanted to see us being children, as we had a right to be.

So the moral of my story is this — in spite of everything that has happened, I’ve had a good life, and still my heart is broken, and whiteness is its cause.

Whiteness was and remains at the center of violations against our humanity and our civil rights. It is for that reason, on May 6, 2019, I urged progressive, white leaders to take the Milwaukee Civil Rights Bus Tour, with the hope that they will become ready and willing to lead differently.

To white progressive Milwaukee: Anything less than your readiness and will gets in the way of my liberation and the liberation of my people. It dishonors the lives of those who endured and those who continue to do so. And for every one of us, especially for those not yet born, I remain committed to Black Lives and will continue to demand that you commit to living your lives differently.

One thought on “Op Ed: Civil Rights Tour of City Is Heart Breaking”