Why he deserves an Oscar for A Beautiful Day in the Neighborhood. 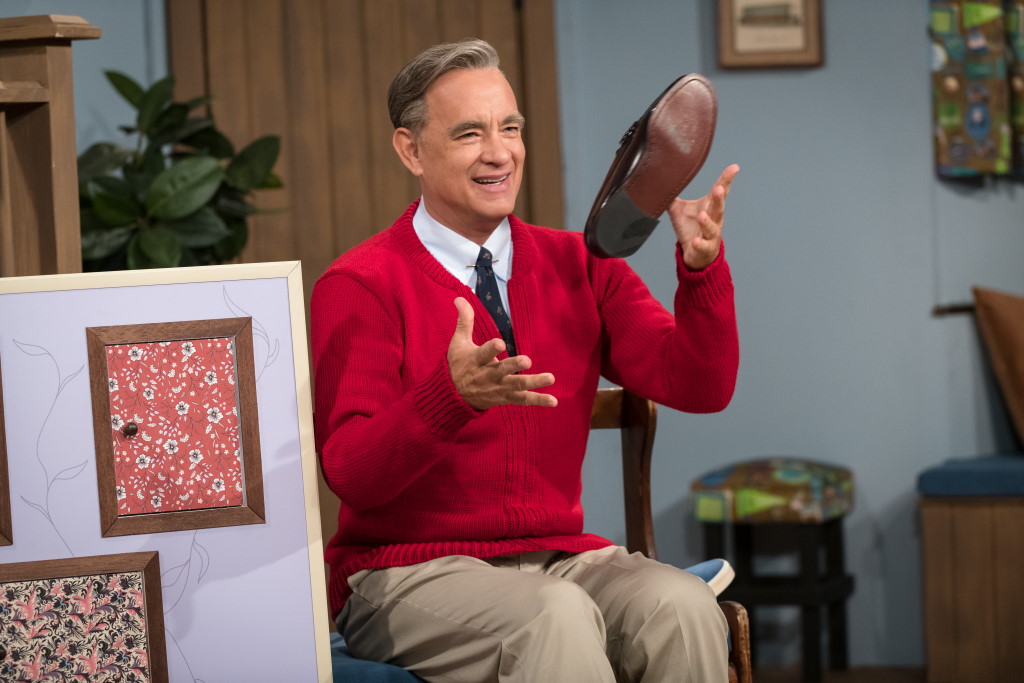 It’s bothered me that A Beautiful Day in the Neighborhood gathered only one solitary Oscar nomination – why was that? A back of the hand recognition that Fred Rogers, the saintly, beloved and much parodied believer in children’s importance and TV’s importance to them, could not be completely dismissed as an American legend?  A tribute to a sincere fictional film building on the runaway success of a documentary devoted to Rogers’ life and influence on generations of children, my own included?

The category it won — Best Supporting Actor — was itself suspicious since it is larded with celebrity names who often carry a picture and not one was doing a cameo appearance. So what besides tokenism or afterthought was Tom Hanks as Rogers doing in that supporting actor category? As a sop to make sure Brad Pitt won as the liveliest part of Once Upon a Time in Hollywood? To keep Anthony Hopkins at bay as the lesser role (mea culpa Benedict) in The Two Popes? To confirm that two powerhouse draws, Joe Pesci and Al Pacino, are present for The Irishman to neuter each other?

And how in the name of King Friday XIII is Hanks even present in the supporting actor category! Is he not the main reason anyone would go to A Beautiful Day in the Neighborhood — to see what the most popular nice guy in movieland brings to the nicest guy television ever experienced?

The last question also bothered me – until I saw the film. And lo! Hanks ought to be in the lead actor category, but if we can for manipulative purposes only get him in the supporting actor category, well, he is delivering one of his best acting jobs, not only in perfect emulation of Rogers’ style and voice but in surprising us with how straight-ahead intelligent is his attempt to investigate the qualities behind the public personality. Turns out the private matches the public and we are the ones ashamed of our cynicism.

Now this reaction is surprising because Hanks is easy to criticize as an actor who has let some of his natural gifts waste away in his tendency to be Hollywood’s go-to guy for niceness. Road to Perdition reminded us he could be a mischievous villain and A League of Their Own how funny a clown drunk. Be he was usually the nice comic leading man when you needed a comic but appealing young one, even the nice young widower that Meg Ryan dreamed of in Sleepless in Seattle, the touching homosexual lawyer dying of AIDs in Philadelphia, the goony determined Forrest Gump, the embodiment of Americana GI in Saving Private Ryan and various films where he shined as skipper in space, in the skies, on the ocean all based on real life American heroes.

He even became a joke, asked to humanize Walt Disney in Saving Mr. Banks, one of the portraits when his efforts to create a grinning human front in all circumstances was cloying. I admit I anticipated that cloying side from his Fred Rogers outing but Hanks the artist surpassed himself. He pulled in the various colors his palette contains to play freely, genuinely ahead with the Rogers persona, not trying to over-color his open reactions to others, his awareness of how he was mocked, not lost in being himself. If anything, Rogers’ reliance on his proven gifts, his sense of safety in who he was, stands out.

It is a real acting job in a film that can barely justify Hanks in the supporting category because there is an angry young father and his wife – fine work by Matthew Rhys and Susan Kelechi Watson — in this film. Rhys is the cynical magazine writer who can’t believe Mr. Rogers has anything substantive to add to his life and winds up angry to be caught out in his way of thinking. But the film takes even more minutes interacting with Hanks as with the couple to tell its story.  If there is a real supporting actor to nominate in this film it is Chris Cooper nailing so perfectly as he so often does the dissolute father whose presence has so stirred the anger. The story was inspired by a touching Esquire article more than two decades ago about Rogers, who died in 2003.

A young intelligent director, Marielle Heller, has seized on a nice framing device for the story as well as some solid work of storytelling. The toy village and city that Rogers created for TV is expanded into real life, so that toy planes take off and toy traffic jams carry the characters around interchanged with real streets and cities. The device works for a long time until the playfulness of Rogers’ world becoming the real world becomes weary after an hour and is further damaged when the film tries too hard to make us accept Rogers’ fancies as our own lives. It’s like the film no longer trusts Hanks’ artistry or Rogers’ heart to lead us.

The smart money says Pitt for supporting actor. Hopkins would be an acceptable choice. But the best acting is a surprise. It belongs to Tom Hanks.