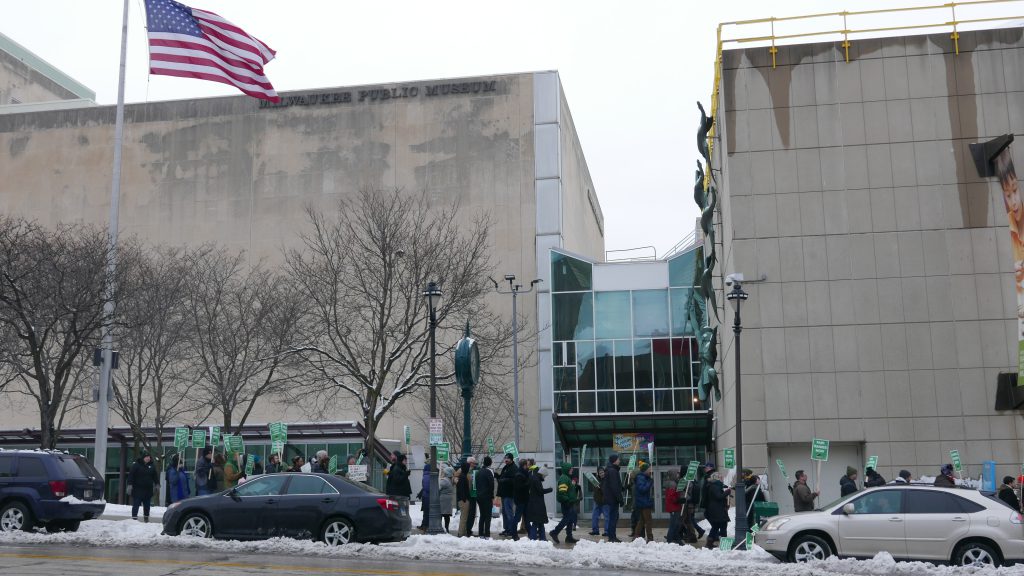 The Milwaukee Public Museum and the union that represents their employees have entered a pitched battle over the terms of their new contract, which includes a unusual provision that would require employees to have their private medical data tracked and financially penalize them for falling behind in a wellness program.

Negotiations started this fall, and members of AFSCME Local 526 were shocked by the initial contract offer they received from the museum. The union’s president, Jaclyn Kelly, said she’s never seen a contract offer like this.

For a three year contract, according to the union, the museum proffered: no raises, no cost of living adjustments and an elimination of 1.5 percent of 401k benefits, while tripling the workers’ health care deductible and capping pay for employees that make it to the top of their range. Since then, during the ensuing negotiations, the museum has offered a raise of 0.85 percent annually, which doesn’t even keep up with inflation, Kelly said.

The union represents workers at all income levels: from part-time employees to ticket collectors, educators, maintenance staff and scientists. For the lowest paid employees, the raise wouldn’t bring their hourly pay above $11, Kelly said.

But for many workers, one of the most shocking provisions was a proposal from the museum that sought to manage health-care costs by implementing a system of financial penalties if workers did not meet certain standards in the employee wellness program.

Right now, the museum offers an employee wellness program to workers called Go365. It is a program designed by and also a wholly owned subsidiary of their healthcare provider, Humana. In previous years, Go365 was optional for employees. It offered incentives, like gift cards, for participants as they advanced through the program. Humana rewards companies with high levels of Go365 participation by knocking points off of their insurance plan renewal rate, according to the union. This is how Go365 can control health insurance costs.

The new offer from the museum is this: if a worker makes it to the top two levels of the program, the percentage of their monthly premium they pay would go down by 5 percent, but if a worker is in the bottom levels of the program, they would be penalized with a 15 percent increase in the percentage of their monthly premium they have to pay.

This new system of carrots and sticks makes the wellness program ipso facto mandatory, as employees would choose between participating or losing money on their healthcare premiums. This is troubling for the union, especially because the program requires users to share personal data about their health.

“We made a big stink about the Go365 premium structure,” Kelly told Urban Milwaukee. So the museum came back with a new offer. If the union doesn’t want to agree to the new wellness program provision, any annual increases in health insurance costs with Humana would be absorbed 100 percent by the workers.

These two contract provisions put the union in between potentially skyrocketing health insurance costs or feeling like they have to share personal medical data with a program owned by their insurance company. Go365 requires participants to have their health assessed, so the program has a baseline measurement of their health. Then, participants also need to have a biometric screening, providing Go365 with data on their blood pressure, body mass index, blood glucose and cholesterol.

Part of the program also requires measuring exercise. This requires using an app on their smartphone, which not all the workers have, or using devices like FitBits or Apple Watches to track their exercise. The museum has offered to purchase these for employees, according to the union. But they will have to reimburse the museum if they are not successful in the wellness program. “It appears it could result in people paying for a device they may not have purchased otherwise,” Kelly said.

The museum declined to discuss their contract offer to the union. Rather, they released a statement saying they “greatly value their employees,” and “look forward to reaching an agreement that is in the best interest of our institution and our employees.”

The museum is a public-private institution. Milwaukee County budgeted more than $3 million in tax levy to support the operations of the museum in 2020, and the museum also raises millions in private donations. MPM Inc. is currently looking to build a new museum somewhere in downtown Milwaukee that is expected to cost as much as $100 million, largely raised through private donors.

To dramatize their concerns about contract negotiations, the union went public and recently held a picket outside the museum. Despite the frigid conditions that day, it was well attended. Local elected officials like County Board Supervisors Jason Haas and Steven Shea attended, as did State Sen. Chris Larson (D-Milwaukee), a candidate for Milwaukee County Executive.