Huge decline in aid in last decade helped fund tax breaks for wealthy, still hasn’t been made up.

By Tamarine Cornelius, Wisconsin Budget Project - Feb 1st, 2020 02:47 pm
Get a daily rundown of the top stories on Urban Milwaukee

Wisconsin’s public school districts still get less state support than they did a decade ago despite recent increases, a new analysis from the Wisconsin Budget Project shows.

Wisconsin state tax revenues are coming in higher than originally anticipated, an estimate released last week showed, meaning the state will have an additional $452 million in public resources to work with beyond what was originally counted on when the budget was finalized, even after making a significant deposit to the state’s rainy day fund. This will set off discussions about how to use the money, with some lawmakers pointing to the needs of Wisconsin’s public schools.

One reason state aid for school districts still hasn’t caught up to where it was a decade ago is that legislators allocated an increasing amount of public resources to tax cuts, many of which disproportionately benefit the wealthy and well-connected. Severe cuts to education were made in 2011, in the aftermath of the Great Recession and during a time of decreased tax revenue. But as the economy improved, state lawmakers focused on continuing to cut taxes rather than restoring state support to educate students in Wisconsin’s school districts. 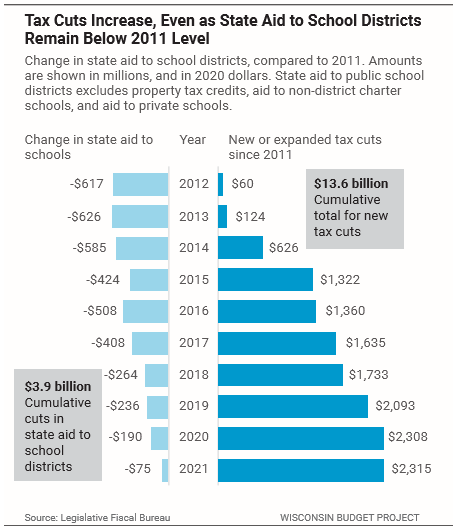 Tax Cuts Increase, Even as State Aid to School Districts Remain Below 2011 Level

That same pattern of prioritizing tax cuts for the wealthy may play out again this year. Some legislative leaders have said that they would rather use the additional tax revenue announced last week to cut taxes rather than restoring reductions in public school districts, early education, or the state’s higher education systems.

Another reason for these reductions is that the state has fueled the growth of separate school systems that are funded in part by reducing resources for public school districts. The transfer of state aid from school districts to private and independent charter schools represents a relatively small share of overall state aid for public schools at this point, but that share has grown rapidly and is projected to swell in the future. 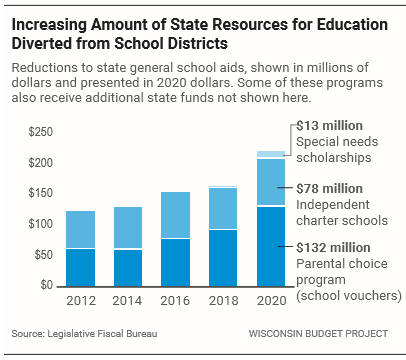