Near West Side Partners leader says state is advancing project that could land on 27th St. 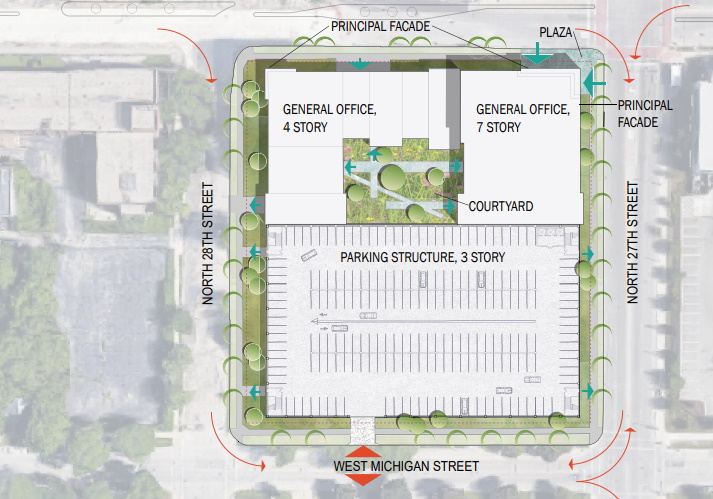 The potential relocation of the State of Wisconsin‘s Milwaukee office building to the near West Side took another step forward Monday.

“We received a letter of intent from the state office to move forward possibly with the sale of the property,” said Near West Side Partners (NWSP) executive director Keith Stanley to the City Plan Commission.

The commission recommended approval of a zoning change that would rezone the entire block at the southwest corner of N. 27th St. and W. Wisconsin Ave. for a conceptual office building. The move, which would establish a General Planned Development zoning package, is a precursor to a future request for approval of a final building design.

The state’s $98.5 million project would involve the construction of a 200,000-square-foot office building with 680 parking stalls. The move, which could include up to 600 state employees, has been delayed since it was first proposed in February 2018. The current building is located at 819 N. 6th St.

“What we have before us today I think is the start of something really special for the near west side,” said Stanley. An affiliate of the non-profit has acquired all 17 parcels that fill the block bounded by W. Wisconsin Ave., N. 27th St., W. Michigan St. and N. 28th St. The organization spent approximately $1.5 million acquiring the parcels, many of which are vacant. Stanley said the organization identified the site as significant during a 2015 design charette.

Even if the state doesn’t select the site, Near West Side Partners is still pursuing development of the site. “It’s important that we have something that’s meaningful to the community,” said Stanley. He noted that the intersection is passed by 45,000 cars daily. It’s also home to four of the 10 busiest bus stops in the Milwaukee County Transit System.

Quorum Architects is working on the project with NWSP. Firm principal Chris Hau and landscape architect Jennifer Current briefed the commission on three different site layout options. “They demonstrate the ability of this site to house a catalytic development,” said Current. She said they all reflect “good urban design.”

In each proposal the office building is pushed to the northeast corner of the site. “All of the plans you see have variations on height,” said Current. The building height, which would fill a maximum of 40 percent of the block, ranges from five to seven stories. A parking garage would be constructed on the southern portion of the site, and range in height from two to five stories depending on how much of the lot it would cover.

Depending on the layout ultimately selected by what Stanley calls the “end user”, the building could have an L, U or straight-line shape. A plaza is included in every design option, but varies in size.

Commissioners Ranell Washington and Catrina Crane asked if the public would be able to use the parking overnight and the plaza, but Stanley said that again depends on the “end user.” He said his organization would advance those discussions.

What option does the state like? asked Commissioner Darryl Johnson. “At this time we don’t know,” said Stanley.

Commissioner Stephanie Bloomingdale, who said she was channeling the recently-deceased Whitney Gould (former architecture critic and commission member), asked about the necessity for so much parking and its potential blighting influence on pedestrians and neighboring properties.

“Ultimately we are trying to take our queue from a number of different people,” said Stanley. Chief among those is presumably the state Department of Administration, whose request for proposals specified it wanted “680 parking stalls for staff, visitors, handicap and State Fleet vehicles.”

NWSP is made up of the area’s anchor institutions including Marquette University, Harley-Davidson, MillerCoors, Aurora Health Care and Potawatomi Business Development Corporation.

Governor Tony Evers proposed spending $98.5 million to advance the project in his 2019-2021 budget, but the Republican-controlled Legislature stripped the bonding authority for the project. The Department of Administration restarted the process by issuing an RFP in September. Responses were due by October 21st with an announcement expected in approximately eight weeks according to the RFP’s project timeline. The state’s Building Commission would still need to approve the project.

Commissioner Allyson Nemec, a principal at Quorum, abstained from voting on the proposal. The remaining commissioners passed the recommendation unanimously. The proposal will next go before the Common Council’s Zoning, Neighborhoods & Development Committee.

Last week the Common Council requested the Department of City Development prepare legislation to vacate the two alleys that bisect the block. The commission in a separate vote Monday endorsed that action.

3 thoughts on “Eyes on Milwaukee: State Office Building Gets Boost”