Section 8.12 of Wisconsin statutes establishes a bipartisan committee whose only duty is to meet in January of a presidential election year and decide who should be listed as a candidate for president on the spring ballot. The members of the committee are either office holders from each party or individuals chosen by those office holders.

Here is how the statute describes the criteria the committee should use:

On the Republican side, the committee placed one: Donald Trump. The committee refused to include former Massachusetts Gov. William Weld and former Illinois Congressman Joe Walsh, the two people who have announced their candidacy for president as Republicans.

Both candidacies have been, in the words of the statute, “recognized in the national news media throughout the United States,” although often treated with a note of skepticism. But the same could be said about several of the 14 people who will be on the Democratic ballot. Both Weld and Walsh, for example, have won public office. The presidency, by contrast, is the first office that several of the Democratic candidates have ever run for.

Republican Bill Weld ran in 2016 for vice president on the Libertarian Party ticket with Gary Johnson after serving as Massachusetts governor. The next chart shows the outcome of that election in Wisconsin. Jill Stein is sometimes blamed for throwing Wisconsin to Trump, by drawing off votes that would otherwise go to Hillary Clinton. But the Johnson/Weld ticket won about three times as many votes as did Stein’s Green Party. 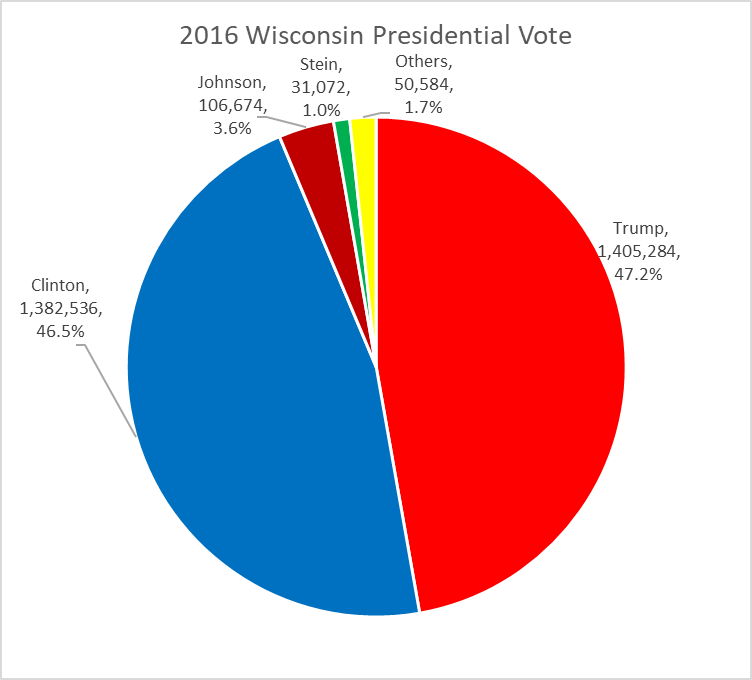 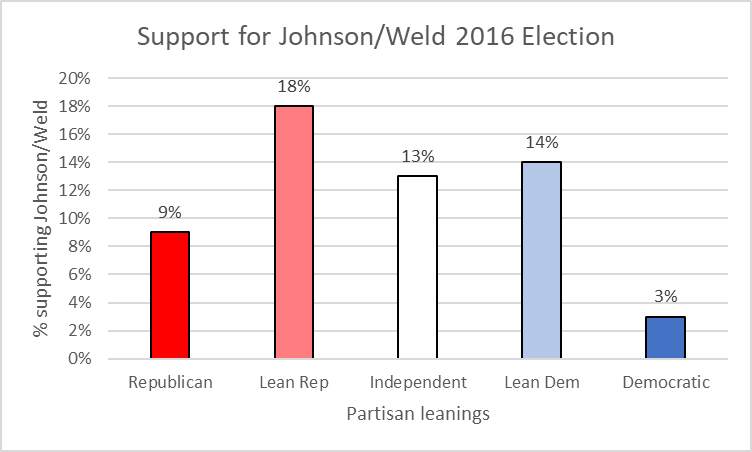 When it came to candidates on the Republican side of the 2020 ballot, the committee failed to follow the language in the statute. However, the statute also rules out a challenge to the committee’s action. To overcome the committee’s decision, Weld and Walsh must collect 1,000 signatures in each of Wisconsin’s eight congressional districts by January 28. More likely, they will fall back to merely encouraging voters to write in their names.

In a post on Right Wisconsin, the conservative writer James Wigderson attacks Republicans for “a bizarre, cowardly twist in the history of Wisconsin presidential primaries.” Wigderson credits the decision largely to Republican risk aversion: even though support for Trump currently is overwhelming within their party and seems immune to anything Trump does or says, Wigderson suggests that something may happen to change that, such as damning testimony from John Bolton.

In his three years in office, Trump has succeeded in remaking the Republican Party in his own image. Trump hates it when people disagree with him, particularly if they are Republicans. For Weld and Walsh to run as Republicans is a particular affront—to Trump and the now-Trumpist Wisconsin Republican Party.

Why didn’t the Democratic Party members on the committee strike a blow for the democratic rights of Republican voters? The Journal Sentinel said that state Democratic Party chairman Ben Wikler explained that “Democrats didn’t try to get more Republicans on the ballot because they believe it should be up to the parties to determine for themselves who their candidates are.” But that argument contradicts the language of the statute itself: It establishes a single committee, not two committees, one for each party, which suggests members of both parties can vote on who the candidates in each primary should be.

Along with the presidential primary, among the other races on the April ballot is one for Wisconsin Supreme Court Justice. The incumbent, Daniel Kelly, was appointed by Scott Walker and is known as being extremely ideological. Kelly’s supporters feared that an influx of Democratic voters motivated by the Democratic presidential primary would hurt Kelly’s re-election chances. As a result, one of the bills passed in the Legislature’s “lame duck” session would have changed election dates to separate the Supreme Court election and the presidential primary. That effort failed when it became obvious that the result would have overwhelmed Wisconsin’s election system.

Similarly, if there were a challenge to Trump’s re-election on the April ballot, more Republicans might be motivated to turn out, either to support Trump against his challengers or to support the challengers. That would be good for Kelly. Perhaps that thought motivated Democrats on the committee to defer to the Republicans.

If so, that is unfortunate. Currently there are a number of issues where the interest of Democrats closely align with the interest of democracy. Especially since the 2010 election most of the gerrymandering in the country has aimed at entrenching Republicans in power. Wisconsin’s lame duck laws reduced the powers of a newly elected Democratic governor and attorney general. Current efforts to erect barriers to voting and purge the voting roles have a disproportionate effect on people likely to vote Democratic. In all these cases the interests of Democrats and of democracy align.

But not in this case. In allowing the Republican members to give Trump a monopoly in the spring primary, the Democratic members missed a chance to demonstrate that their priority was democracy, even for Republican voters.

One thought on “Data Wonk: Both Parties Bar Primary Challenge to Trump”