Stiffer penalties on variety of crimes even as Evers moves to reduce prison population.

By Isiah Holmes, Wisconsin Examiner - Jan 14th, 2020 11:32 am
Get a daily rundown of the top stories on Urban Milwaukee 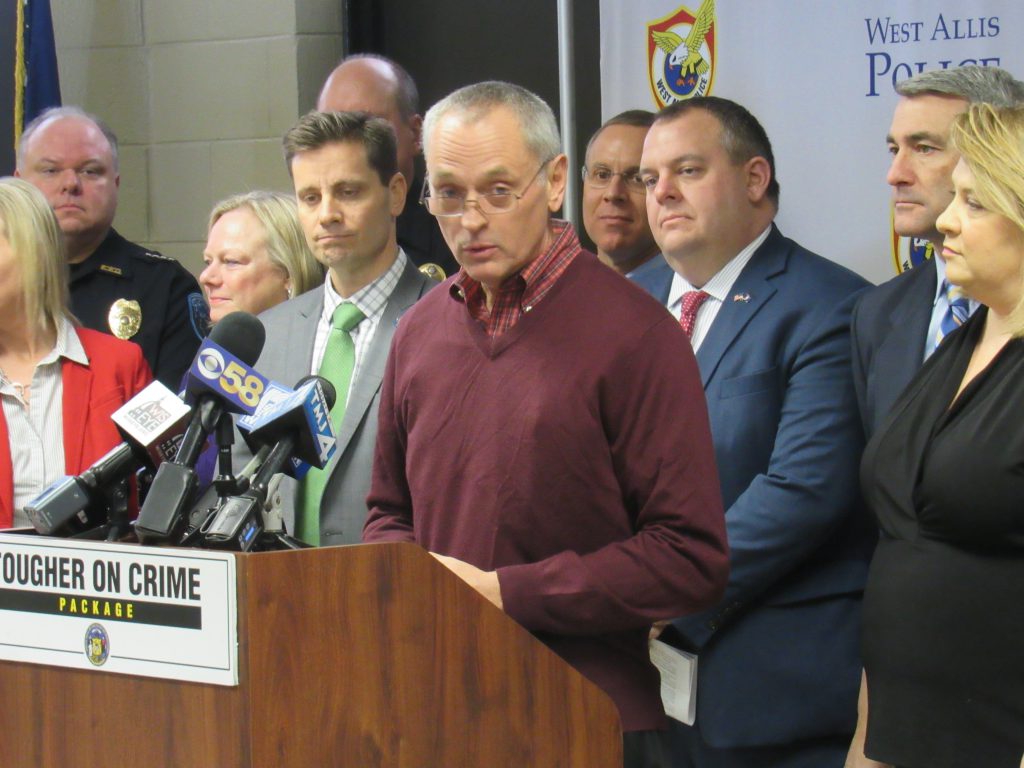 Standing before a banner sporting the “thin blue line,” a symbol of support for law enforcement, Rep. Joe Sanfelippo (R- New Berlin), introduced a new package of “tougher on crime bills,” alongside other colleagues. Leading the meeting at a substation of the West Allis Police Department, Sanfelippo applauded the suburb for having also recently introduced resolutions to call on the county to be tougher on crime.

“I think that every representative and senator here,” said Sanfelippo, “is going to tell you that we are all hearing from our constituents, our local officials, and our police and law enforcement folks, no matter what part of the state you represent or area that you’re from, that crime has been on the rise here in Wisconsin. It’s eating out bigger and bigger portions of our local budgets, and it has really become a problem. And so, we want to be able to crack down on this.”

Chief Mitchell explained that the bill package is not related to Operation: Relentless Pursuit. “The federal operation, I know that it’s coming but we have not received much information,” he told Wisconsin Examiner. “The federal operation would look at, I would speculate, bank robbers or people who are robbing commercial places, like stores, where this would be more of a local impact.”

Operation: Relentless Pursuit was announced in December 2019, and is set to distribute at least $71 million in law enforcement resources and funding to seven U.S. cities. In Milwaukee, it may focus mostly on violent crime and opioid trafficking.

Sanfelippo referred to data from the Wisconsin Department of Justice (DOJ), stating that violent crimes including rapes, homicides, and aggravated assaults increased in the state between 2014 and 2018. “FBI data has shown that between 2008-2017, which again is the most current we have to work with, crime increased in all but two cities in the state of Wisconsin. For the 10 largest cities in our state, we’ve had an increase of violent crime by 24%, while the national average on violent crime has gone down by 14%.”

One of the bills focuses specifically on collecting more data. LRB-4465 would require the Department of Justice to collect information from law enforcement agencies regarding the number and nature of crimes committed in the state. “What we are interested in finding out is what is leading to those phenomena here,” Sanfelippo said. “Why is Wisconsin different than the rest of the country?” 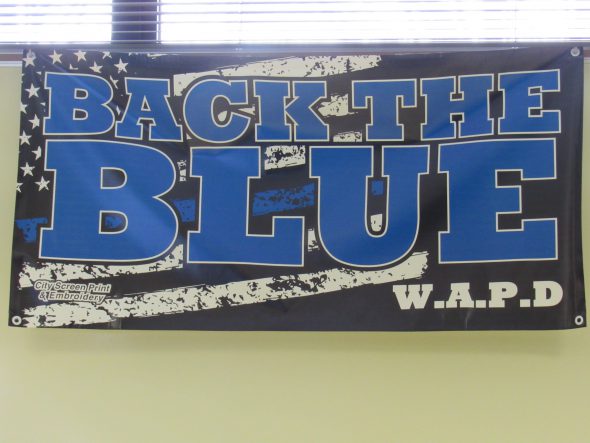 “A ‘Black The Blue’ banner hung during the press conference. Photo by Isiah Holmes/Wisconsin Examiner.

While collecting more data is one part of the package, other bills focus on specific offenses. One bill expands the acts for which a juvenile may be placed in the Serious Juvenile Offender program (SJOP) or in another kind of correctional facility. Another focuses on illegal possession of firearms, another on revoking parole and probation for those who commit violent crimes.

Such measures have become points of contention for the criminal justice reform movement. A group in Milwaukee has spent the last few years calling for the closure of the Milwaukee Secure Detention Facility (MSDF), which houses people who violate parole or probation. Other efforts from Democrats in the State Legislature have attempted to tackle “crimeless revocation,” such as probation violations which cause people to be returned to jail for breaking minor rules. Juvenile detention facilities such as the Lincoln Hills and Copper Lake facilities have come under scrutiny for abuses, creating a public demand that they be forced to close. Several presentations discussing the impacts of mass incarceration on minority communities have been held under the Evers Administration, and how to steer policy to reducing the number of people re-entering the system.

While the Republican bills are aimed at getting tougher on crime, Sanfelippo says it’s still possible to work towards reducing the prison population. “There are people with substance abuses that need help. They shouldn’t be in prison, they should be in rehabilitative programs,” he told Wisconsin Examiner. “And, overall, if somebody makes a mistake we should give them a second chance. What we’re aiming at is the habitual offenders who repeat crime over and over and over again, yet the system doesn’t do anything different to change it.”

Chief Mitchell added that policies that are not “tougher on crime” hurt the morale of police officers. “If you’re a police officer and you want to hold people accountable, and there are certain times where the system just doesn’t find a way to do that, it’s frustrating for the officers.”

“Our police departments are overwhelmed,” said Sanfelippo, “and our local municipalities are overwhelmed [because of people] who cycle through the system but end up back on the street time and time again.” Rehabilitation is important, he told Wisconsin Examiner, “but when that is your sole focus, then you create the problem that you’re seeing right now.”

Sanfelippo suggested that the data-gathering portion of the bill package, which he says may offer insights into what drives Wisconsin’s incarceration and crime patterns.

One thought on “GOP Legislators Push “Tougher on Crime” Bills”