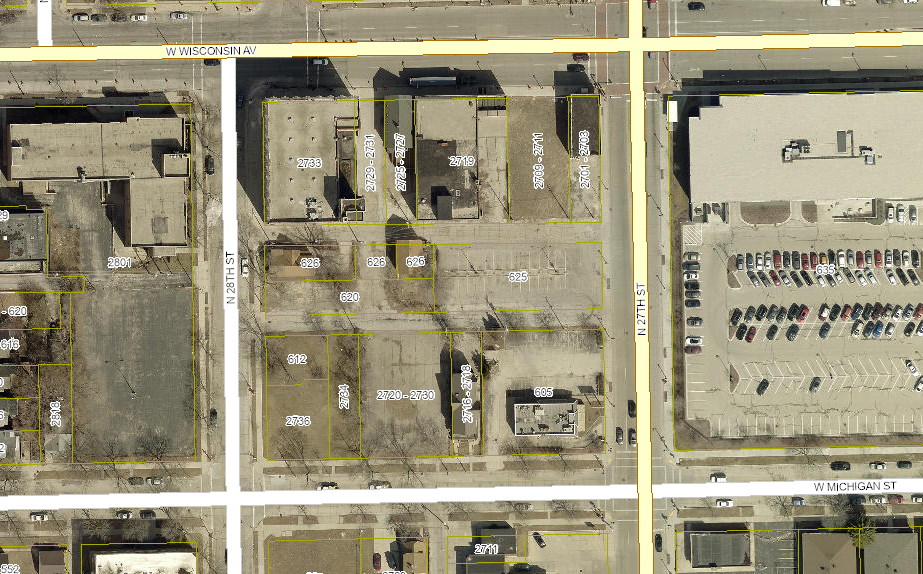 Is the State of Wisconsin poised to relocate its approximately 600 downtown Milwaukee employees to a site at N. 27th St. and W. Wisconsin Ave.?

The Department of Administration has yet to announce a winner of an October request-for-proposals process, but one of the applicants has activated a long-dormant Common Council file to assist in preparing its development site.

“We are still in the running, but we don’t have any news yet,” said Near West Side Partners executive director Keith Stanley in an interview with Urban Milwaukee. The organization is made up of the area’s anchor institutions including Marquette University, Harley-Davidson, MillerCoors, Aurora Health Care and Potawatomi Business Development Corporation.

An affiliate of the non-profit has acquired all 17 parcels that fill the block bounded by W. Wisconsin Ave., N. 27th St., W. Michigan St. and N. 28th St. The organization spent approximately $1.5 million acquiring the parcels, many of which are vacant.

The proposal to vacate the alleys was first introduced on January 17th, 2018 alongside a proposal for the city to sell a vacant lot it owned in the block. The land sale advanced while the alley vacation remained untouched.

So why move things forward now? “We’re making sure the site is ready for a future catalytic project,” said Stanley. The executive director said his organization is working with the Department of City Development on a zoning change for the parcels.

In February 2018, Governor Scott Walker formally announced a plan to build a new state office building. The then-governor said the $50 million proposal would save $1.2 million annually through energy efficiency, reducing the amount of leased space and other operational efficiencies. The state would sell its existing 10-story building at 819 N. 6th St. once a new building opened.

Governor Tony Evers proposed spending $98.5 million to advance final building design and site selection in his 2019-2021 budget, but the Republican-controlled legislature stripped the bonding authority for the project.

The Department of Administration restarted the process by issuing an RFP in September. Responses were due by October 21st with an announcement expected in approximately eight weeks according to the RFP’s project timeline. The state’s Building Commission would still need to approve the project.

The proposal calls for a 200,000-square-foot building with 680 parking spots.