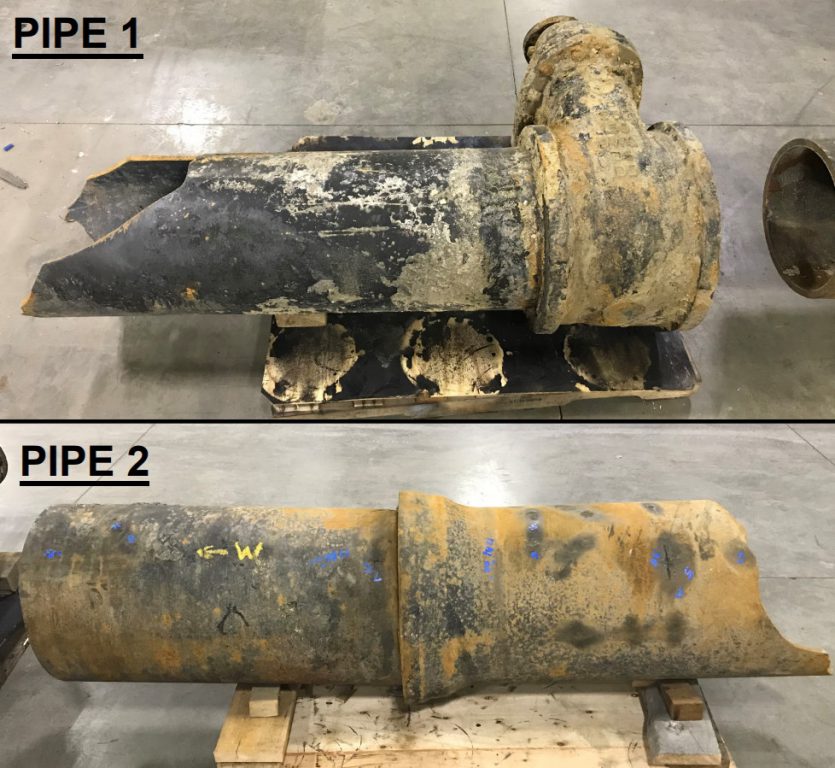 At 8:57 a.m. on Saturday, December 28th, an alert went off at the city’s Linnwood Water Treatment plant on the shore of Lake Michigan. A sensor on the city’s west side, one of many in the city’s 1,960 miles of water mains, was reporting an “extreme pressure drop.”

It wasn’t a false alarm.

By 9:03 a.m. the Milwaukee Police Department had called the Milwaukee Water Works (MWW) to report a water leak near S. Hawley Rd. just south of Interstate 94.

MWW officials initially thought it was a break in a 48-inch concrete water main that runs under S. Hawley Rd. The decision was made to shut off water to a segment of the pipe.

But closing off a major water main in a hurry isn’t an easy task. Two butterfly valves, each requiring 900 manual turns by a two-person crew, would need to be closed in tandem to prevent a “water hammer,” a hydraulic shock from abrupt momentum change, which could cause further breaks.

In the meantime, nearby streets began to more closely resemble rivers.

The main was isolated by 11:30 a.m. and by 12:00 p.m. water had stopped running through the streets. Unfortunately for many nearby residents, it had found its way into basements and a nearby parking lot.

Approximately 40 individuals are now expected to file claims against the city. Some have cars that were flooded, others had up to three feet of water in their basements. In almost every case, homeowners insurance would not cover the damage because it was caused by a flood.

What happened? That’s the million-dollar question the city is trying to answer.

What is known is that 29 feet of a 60-year-old, 16-inch cast iron water main servicing W. Dixon St. was effectively destroyed. One end of the remaining pipe shows “significant corrosion.”

“This is a very, very rare circumstance,” said Dettmer, who has lead the utility for just under a year. She told the committee, which includes area Alderman Michael Murphy, that employees with over three decades of experience have never seen anything like it.

“The vast majority of our water main breaks are on six- and eight-inch mains,” said Dettmer. “The most common break is due to corrosion. On this particular pipe, we had many areas of corrosion.” 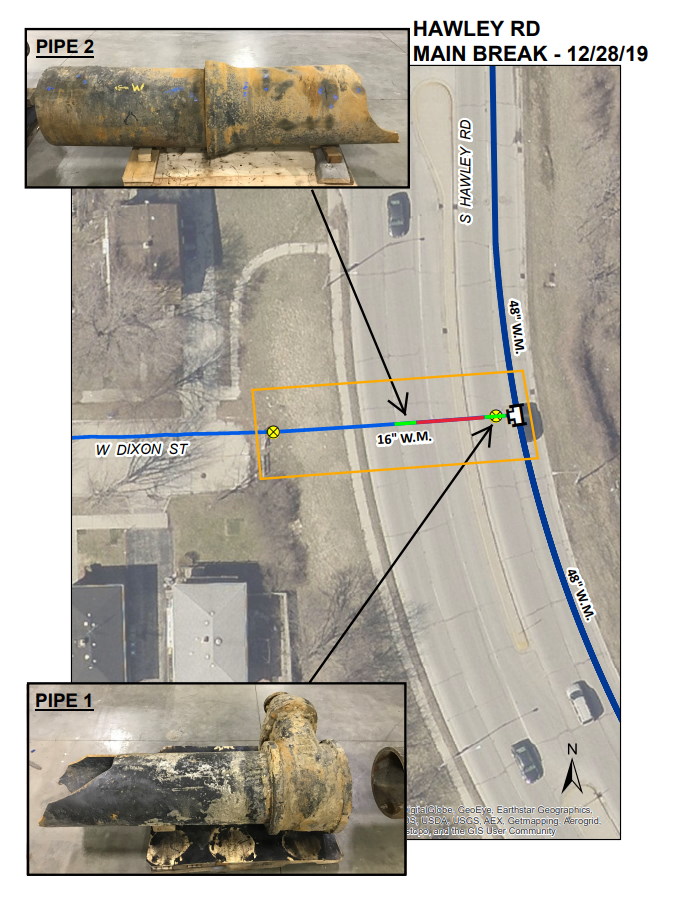 A series of processes are now underway to address everything from restoring water service and rebuilding S. Hawley Rd. to handling damage claims and researching what happened.

Pumps were added to clear the site of the break, with quite a few residents also needing pumps to clear their basements.

The recovered segments of the pipe have been sent to a materials testing lab for review. The city is also in contact with the manufacturer regarding potential manufacturing defects in the steel pipe.

Water service, delivered via the other end of the 16-inch main, was restored by 10:30 p.m. the evening of the break after a new valve was installed.

Dettmer said MWW employees went door to door to advise residents on doing a full-house flush and how to file a claim to the city for damages. This included leaving literature for those dealing with the property damage just days after Christmas. “Understandable that it was a chaotic time,” said the superintendent.

Mid City Corporation installed a new, 85-foot-long, 16-inch main segment and welded it to the 48-inch main. Three epoxy coats are now being applied to the main to seal it. The 48-inch main remains shut off. “They have been a great partner,” said Dettmer of Mid City’s assistance. S. Hawley Rd. is scheduled to fully reopen to traffic on Monday, January 13th.

Dettmer also praised MWW claims processor Michelle Thompson-Gray for her hard work including visiting homes and volunteering to work on New Year’s Eve when city offices were closed. Dettmer said Thompson-Gray’s work would help speed up the city’s ability to respond to claims.

“Our investigation is ongoing and we will be tireless in finding out what exactly happened here for many reasons,” said Dettmer as deputy city attorney Jan Smokowicz approached the table.

“That’s important, we always like to know what caused this type of mishap,” said Bauman. “That’s all nice. The homeowner is interested in who’s going to reimburse them for their damages, if anybody.”

“At this point we, like you, are just obtaining information on this,” said Smokowicz. The attorney said other resources are available in the meantime.

“Those resources are not quick,” said Bauman. “Someone applies for a STRONG home loan, they might be likely to get their money in six months.”

Murphy, who said 38 individuals have contacted his office, thanked the residents for their patience and city employees for their hard work over what is usually a holiday lull. “I’ve been in a basement or two and the residents have three feet of water,” said Murphy, while ticking off a list of family keepsakes that he’s heard were lost. He said he visited one home with potential structural damage from the water pressure.

“This is a very blue-collar, hard-working neighborhood,” said Murphy. “This is a huge financial burden for a lot of these residents.” Murphy said he expected half of the claims to be related to automobiles, because an apartment building parking lot at 427 S. Hawley Rd. was flooded.

“I’m going to certainly advocate very strongly on behalf of these residents,” said Murphy. He asked that the City Attorney’s office find an administrative resolution.

To sue the city for damages, individuals must first submit a claim against the city. The Common Council, at the advice of the City Attorney, can reject those claims to allow a lawsuit in Milwaukee County Circuit Court or settle the claims.