Another Evers Cabinet Pick Under Fire

By Ruth Conniff, Wisconsin Examiner - Dec 24th, 2019 11:39 am
Get a daily rundown of the top stories on Urban Milwaukee 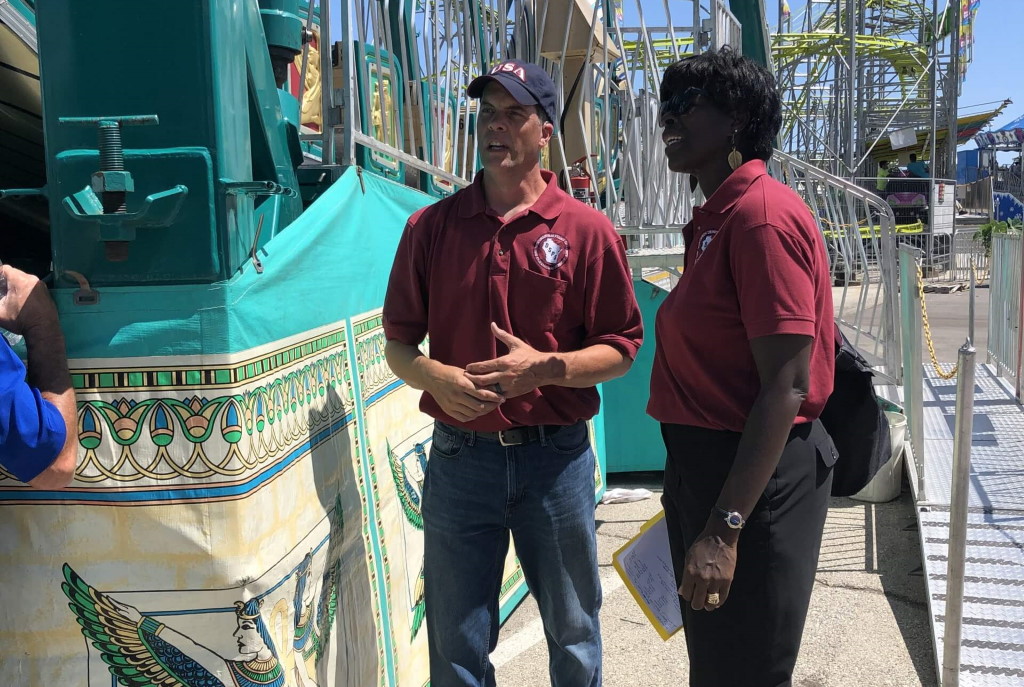 Dawn Crim toured Europe as a college basketball player, and served as an assistant coach at Penn State and the UW-Madison before Gov. Tony Evers chose her to lead the Department of Safety and Professional Services. That sports background has served her well in her new job, she says.

“If you think about a basketball game, or any game, you have a strategy and a plan going in, but there are things that happen that are beyond your control,” she says. “How are you able to adjust and reset for what’s needed at that moment?”

Like a coach at halftime, Crim says, she talks with her staff about “where the opportunities are, what is working,” in her agency. She is sticking with the game plan handed to her by her predecessors, where appropriate, and also adjusting and making changes as she hears from people in the businesses and trades her agency licenses about their needs.

A tall, athletic woman with an easy smile and an exuberant style, Crim says she relishes the sheer variety of people she meets in the 44 occupations her agency licenses.

She is on the road a day and a half each week, reviewing the safety of construction projects and amusement park rides. (Her agency will also vet the temporary structures at the Democratic National Convention in Milwaukee next summer.) She meets with doctors, accountants, tattoo artists and cosmetologists. “We touch one in three Wisconsinites,” she points out.

Crim says the tenacity and focus she learned as an athlete have helped her in her current job. That, along with “the ability to try and crowd out distraction.”

“I’ve been crowding out distraction for some time,” she says.

That skill may come in particularly handy in the coming year, as Republican legislators cast doubt on Crim’s confirmation.

The Republican legislative majority has already decapitated one state agency, refusing to confirm Brad Pfaff, Evers’ pick to head the  Department of Agriculture, Trade and Consumer Protection. Republican senators ejected Pfaff after 10 months on the job, despite an outpouring of support from farmers around the state. This happened after Pfaff criticized legislators for delaying the release of funding for mental health and suicide prevention vouchers for farmers.

Next, Republican leaders say, they may target Crim.

Sen. Chris Kapenga, R-Delafield, chairman of the committee that vets Crim’s nomination and sends it on to the full Senate, told the Wisconsin State Journal that “he has no plans to hold a vote on Crim, meaning she will likely continue to serve with the potential for being ousted looming for the foreseeable future.”

“We’re just not sure she’s the right person at this point,” Kapenga said. “There’s concerns that the job is not being done adequately.”

A painful story about a 2005 child abuse allegation surfaced when Evers nominated Crim, causing Senate Majority Leader Scott Fitzgerald (R-Juneau) to declare that the charge raised questions about Crim’s fitness for the job. Crim did not deny the charge that she hurt her 5-year-old son by poking him in the hand with a pen and piercing his skin after a teacher said he had used a pencil to poke a classmate at his school. In a statement, Crim described herself as a “proud, loving parent” and said the incident represented “the most difficult and trying experience of my life.” The case was dismissed.

Kapenga and other Republican senators also cite a backlog of license applications and commercial construction plans, as well as unspecified complaints of unprofessional conduct — a charge Crim’s supporters, including Evers, vehemently deny.

“It is incumbent upon us as a committee to carefully consider all information before proceeding with a vote,” Kapenga told reporters, “and that is exactly what we are doing.”

Crim points to internal data she says shows that delays in vetting construction projects were just as much of a problem under Gov. Scott Walker, who created her department in 2011 when the Department of Commerce and the Department of Regulation and Licensing merged.

But a review by the Wisconsin State Journal showed that delays in reviewing construction plans have increased from an average of 25 days to 39, even as the agency’s budget and staff have decreased from 369 employees when the new department was created to 237 positions today.

“We’re understaffed,” says Crim, who nonetheless says she is happy with the support her agency received in the current state budget. The budget including money to help the agency complete the work of merging the various systems in the old state agencies, and training staff to move  “from a pen-and-paper environment to an electronic environment.”

“We realize with our workforce, we just can’t do everything, so who can we partner with?” Crim asks. She says she is focused on expanding collaboration, working with 100 professional boards and trade associations who work on training, setting standards, and understanding safety codes.

One of her favorite experiences of the last year was traveling to a tattoo art exhibit in Beloit.

“When people think about licensing, the first thing they think about are the accountants or realtors or the doctors,” Crim says. But her agency also licenses tattoo artists, which is how Crim and her team ended up traveling to the tattoo art show in Beloit, where they were warmly welcomed. Tattoo artists told Crim how much they appreciated their apprenticeship program, she says.

“A lot of times the perception about licensing is that the regulatory bodies are keeping people out,” she says. “Well, the tattoo artists shared with us that they appreciate being a licensed professional, because it validates the work that they do.

Crim praises Evers for making diversity and inclusion a priority in his administration.

“And it’s something that he embodies,” she adds, noting that diversity was a priority for Evers when she worked with him as an assistant  state superindendent at the Department of Public Instruction.

When she first moved to Madison 20 years ago, to take the assistant coaching job at the UW, Crim says she felt like a fish out of water after living in a much more diverse city of Philadelphia.

So she helped establish the Madison Network of Black Professionals with a handful of African- American colleagues.

“The reason we started it was, we were looking around, and we were the only person of color, or the only African American, at our workplaces. And so we talked about what we needed to do to prepare ourselves and to know how to navigate and to help recruit more people of color to the greater Madison area.”

The group focused on welcoming new members who were moving to town.

Madison is “a tough environment” for people of color, Crim says.

“The infrastructure isn’t there to really support a thriving community of color,” she asserts. Her group helped create that informal infrastructure to make the city a more welcoming environment. “Once you get your people, you’re good. It’s finding your people. And what I mean by that is, when you look at the social outlets, the restaurants of color, the nightclubs, musicians, it’s just is very thin. So you really have to seek it out.”

When she moved Madison with her husband, Crim says, she had trouble getting answers to her questions, “Where should I live? Are there churches? Where should I get services?’ Those were all a heavy lift, so it wasn’t readily available. And that’s what makes the retention piece challenging is the energy it takes to seek things out.”

‘There’s a place for you here’

Crim’s personal experience, and her commitment to diversity, inform the way she has gone about building her own secretary’s staff.

She talks about a framed photograph of her cabinet that she keeps in her office, a group of smiling professionals, most of whom are nonwhite.

“But we know there are people.”

Bringing in leaders of color has a domino effect, as they reach out to their networks to fill other jobs, she explains.

“I wanted to be definitive in building a cabinet that was diverse in age and race, and that’s what I did,” she says. “And so we actually are a majority minority. It just worked out that way. But we were talking about equity, diversity and inclusion from day one.”

“We’re asking our division administrators when they have a position to fill, to think about what’s missing in your division. What are the voices? Who are we serving that we don’t have expertise in-house that could speak to maybe some of the things that they need?”

A more diverse agency also changes the way state government interacts with the people it serves. Crim’s philosophy extends to the agency’s five offices in Hayward, Onalaska, Green Bay and Waukesha, where, she sees opportunities to serve a broad and diverse array of people. “Yeah,” Crim says, “there’s a place for you here.”

One thought on “Another Evers Cabinet Pick Under Fire”