Greatest ever? Maybe. But guaranteed to banish all traces of Scrooge-iness 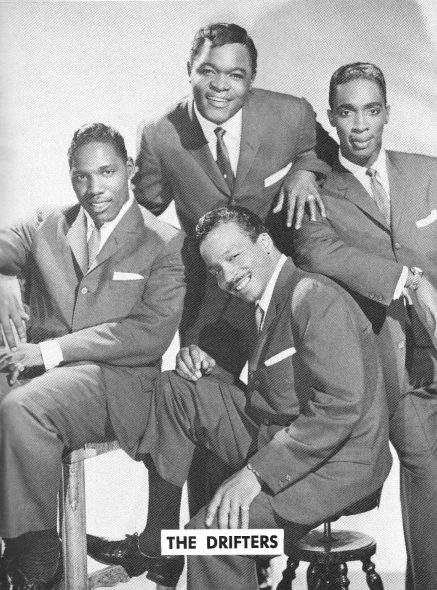 The Drifters. Photo is in the Public Domain.

It’s unavoidable, right after taxes, death and trouble you have Christmas songs, one for every snowflake falling from the sky. Some wind up on your nose and eyelashes (my favorites), others get down your neck and seriously Grinch-ify your mood. I’m the type who can be chased from a store by the wrong music and I don’t think I’m alone. So in no particular order, here are some of the very best holiday songs, mood brighteners for shorter, colder days that allow you to show up at the family gathering feeling less like Scrooge.

Vince Guraldi: “A Charlie Brown Christmas”
Really, anything from this magical soundtrack will do it for me. This is pop jazz about as challenging as a glass of eggnog, but dependably beautiful from track to track. It’s a corrective I use every year when everything about the holidays feels like winter itch. The animated special will remain a highlight until someone in Hollywood decides what it really needs is third rate CGI and a Michael Buble soundtrack.

Phil Spector: “A Christmas Present For You”
Yes, I used Phil Spector and Christmas in the same title. Don’t think about weird Phil, the gun maniac and convicted murderer. Instead, close your eyes and concentrate on the producer/writer who owned the first few years of the 60’s and inspired Brian Wilson. He gave us musical gifts to rival anything Santa ever brought. The perennial favorite, “Santa Claus Is Coming To Town,”  by The Crystals is just one of the great cuts on this disc.

Charles Brown: “Please Come Home For Christmas”
That’s Charles, not Charlie. He was a blues giant from the 1940’s whose mellow baritone was a big influence on Ray Charles. He also had the dubious honor of The Eagles covering his song. One listen to this and you’ll forget Don Henley ever existed. That’s my Christmas present to you.

The Pretenders: “2000 Miles”
The lyric, like more than a few of Chryssie Hynde’s, is a head scratcher. Still, a simple shopping list would give me shivers if she was singing it. Speaking of shivers, the fake snow in this video will induce nothing of the sort. There’s a reason MTV has to have its own video awards show.

The Waitresses: “Christmas Rapping”
Wrote about it last year, still love it.

NRBQ: “Christmas Wish”
The secret sauce in this and a lot of NRBQ songs that featured what fans call “the classic lineup,” is bassist Joey Spampinato’s voice. One of our truly great pop singers, he remains unknown and underrated to the average music fan. This band has always been chock full of talented and slightly loony players and singers. Here they do a sneaky cool Brian Wilson tribute. Speaking of that…

The Beach Boys: “Little Saint Nick”
The Beach Boys, a group few would associate with the blues, love the shuffle rhythm.They give it a precise spin, exactly what you would expect from Hal Blaine, the legendary drummer and member of The Wrecking Crew. Though the video shows heartthrob Dennis Wilson at the kit, he left his sticks at home when they recorded. Precision is the unifying virtue in Beach Boys songs. Their harmony singing is perfection — every note in Brian’s harmonic universe is accounted for. They made decent songs like this one great and great songs, like “God Only Knows,” something beyond the reach of mere mortals.

Robert Earl Keene: Merry Christmas From The Family
I was not going to like Robert Earl Keene, the Texas frat party phenom. I couldn’t imagine liking someone who made their fortune in such an unseemly way. Then I heard this song and just couldn’t resist its low rent charm. Make a movie of this (the video is a good template) and you’ll give “Christmas Story” a run for its money.

The Youngsters: “Christmas In Jail”
In 1956 when The Youngsters were young, this song probably sounded like gangsta rap. It makes a good double feature with “Merry Christmas From The Family.”

The Drifters: “I’m Dreaming Of A White Christmas”
Written by a Jew and song by African/Americans who seem to wink at both Bing Crosby and the very notion of ‘white.” None of it matters if it doesn’t swing like your favorite ornament. Bonus points for the paintings by The Painter Of Light, whose name I have mercifully forgotten but they add a nice touch to the video. Grandma would approve.

I’d suggest more, but I’m running out of internet. We do have room for one more, a perennial masterpiece to my way of thinking, no matter who sings it. It’s one that got the recipe for a perfect balance of bitter and sweet, “Have Yourself A Merry Little Christmas”. Here it is  sung by the star of Meet Me In St. Louis, the film it was written for, Judy Garland. When she unleashes that tremulous vibrato resistance is futile — you will be delivered instantly to maximum Christmas spirit.

Next week, my favorite performance from this year; I think it will be yours, too.

One thought on “Sieger on Songs: 11 Great Christmas Songs”