Simple Café Is So Satisfying 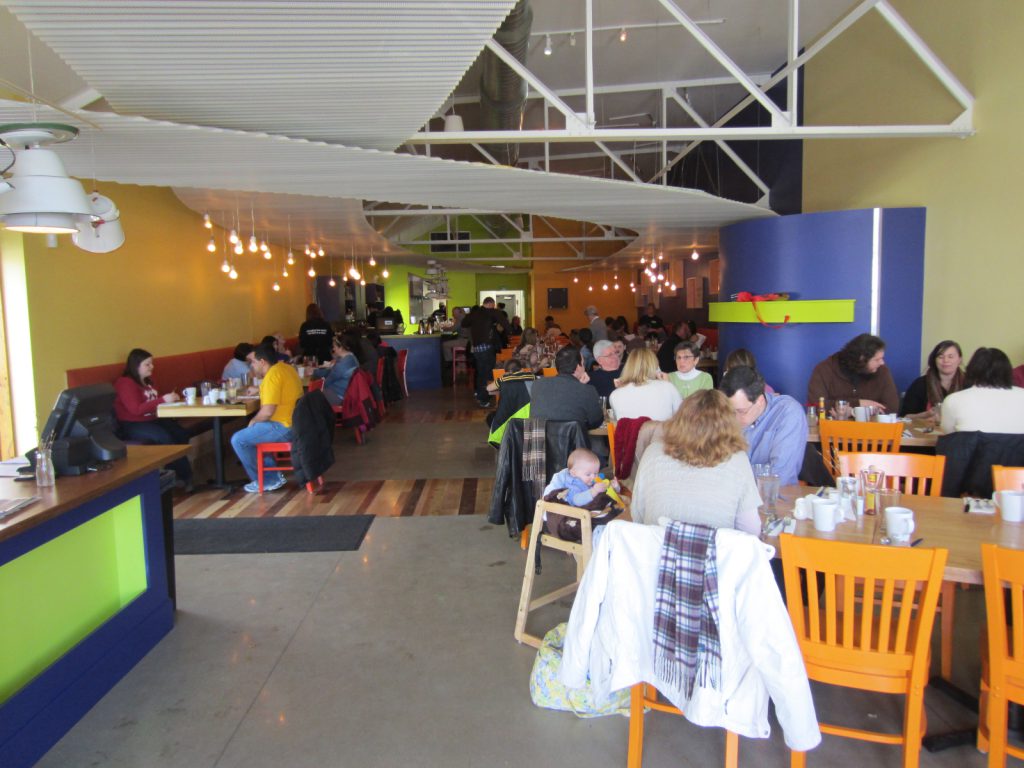 At Simple Café, a breakfast and lunch restaurant, they hope to change the world with food, “one bite at a time,” according to their website. “We believe that if you treat each other with genuine kindness and respect…then we will change the world.”

If light, healthy, tasty meals make a difference, then, at Simple they’re on to something important in a world where too much fast food rules. Not only is the food fresh at Simple, it’s relatively inexpensive, with a mouth-watering selection of omelets, for example, priced at no more than $10.95. The food they serve is locally grown, when possible, and the menu changes with the seasons.

Currently you will find four omelets to choose from: Chicken Chorizo Chili with jack cheese; Garden Egg White Omelet; Mashed Potato Omelet; and the Mushroom Omelet. Or, if you want to get creative, check out the Designer Omelets. For $10.95 you may choose three items from a list of 26, maybe pork sausage links, jack cheese, swiss chard and kale.

They serve all the omelets, as well as most of the breakfast entrees, with Simple potatoes. Recently when friends and I came for brunch, we ordered the Mushroom and the Mashed Potato Omelets. There was no shortage of mushrooms, shitake, cremini, and button, in the former, and the latter was loaded with rich creamy mashed potatoes, abundant bacon, and slivers of green onion. If that didn’t satisfy, then the chef added Creole hollandaise to top off the mashed potato omelet. Someone in the kitchen knows how to pile on the calories, one luscious bite at a time. And those Simple potatoes — salty, crunchy, red potatoes, dotted with bits of green onion — prompted my companion to exclaim, “I don’t need anything more, just give me a plateful of potatoes.”

A few days later at lunch, we reluctantly bypassed the breakfast entrees in favor of soup, sandwiches, and salads. We experienced exceptional service when a companion commented on the tepid tomato soup that accompanied her grilled cheese sandwich. Our server overheard the comment, and without hesitation, whisked the soup back to the kitchen and returned with a hot bowl instead. The grilled cheese sandwich made with multi-grain bread had the perfect ratio of cheddar to bread, making a sandwich far superior to the average grilled cheese.

The Roasted Beet Sandwich, one of several vegetarian choices, had sliced beets that hinted of citrus, with grilled red onion, chard, zucchini, and too much goat cheese. The cheese, a tasty accent, overpowered the beets, the alleged star of the sandwich, while the toasted ciabatta tasted as if it had just exited the oven. Also, on the menu for vegetarians, a Garden Burger made with walnuts and brown rice topped with caramelized onions, black beans, and much more. Somehow it all fits inside a brioche bun.

Burger aficionados will appreciate the 8 oz. Mushroom Gruyere Burger served on a toasted brioche bun. Here is a burger that has enough yum piled on to satisfy anyone who appreciates the fixings as much as the main event. Sautéed mushrooms, gruyere, tomato-onion jam, mixed greens, red onion and roasted garlic top that burger to create a mouth-watering event for anyone who can get their mouth around this delectable combination. My companion‘s basic burger, a special request, came perfectly medium with a hint of pink, plus the usual lettuce, tomato, red onion and mayo. 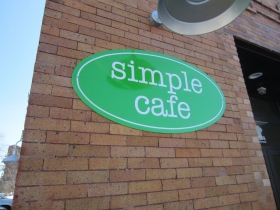 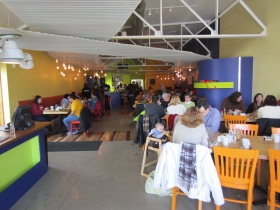 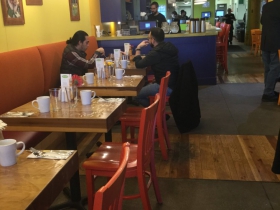 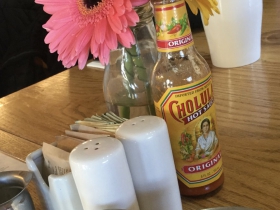 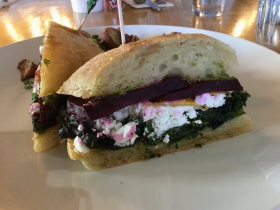 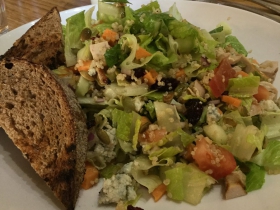 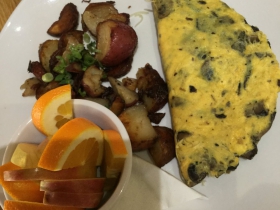 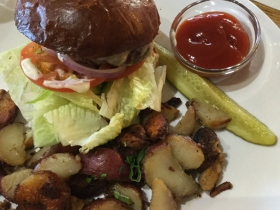 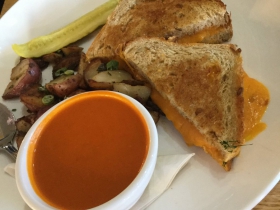