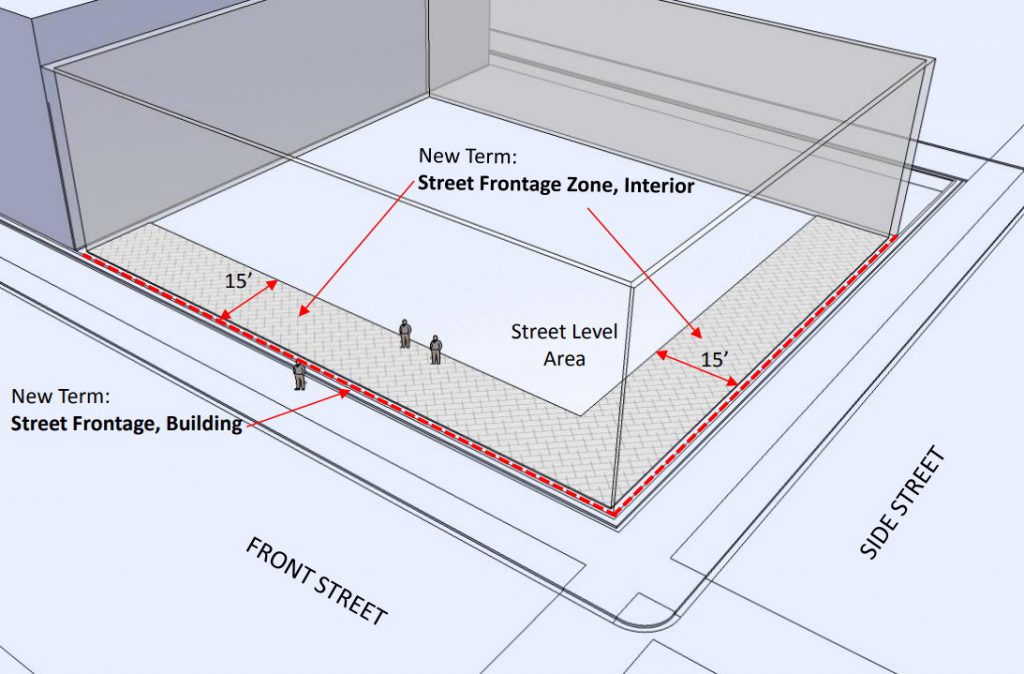 Diagram of zoning clarification. Image from the City of Milwaukee.

As more and more apartment buildings take hold across Milwaukee, the Department of City Development (DCD) is updating the zoning code to clarify how the first floor should be designed.

A new policy will require that street-activating uses, be it an apartment lobby, fitness center, community room or commercial space, be at least 15 feet deep.

“We care that streets have a great street activation,” said DCD planner Greg Patin to a Common Council committee Tuesday. “The code uses the term street frontage, but it doesn’t really define it.”

A 2015 study found that first-floor building design, particularly the amount of window cover, has an impact on the walkability of an area. Good street-level design has been advocated by everyone from urban visionary Jane Jacobs to former Milwaukee Mayor John Norquist.

Patin said ambiguity emerges when first-floor space is used for parking or storage. “Right now, the plan examiners in [the Department of Neighborhood Services] have to interpret this.”

Interior parking spaces would now be pushed 15 feet back, about the depth of one stall. This includes in new mixed-use buildings and parking structures. The amount of activated street frontage depends on the site’s overarching zoning designation.

Most developments in most commercial corridors would be impacted, said Patin.

“The idea is you don’t want to force things on the first floor that don’t need to be there because that’s going to raise costs,” said the veteran planner. He said the definition would help guide the design of spaces like lobbies, community rooms and exercise rooms.

“Interior parking areas, storage and locker rooms, restrooms, coat-check areas and other passive spaces not intended to be visually open to the outdoors shall not be considered street-activating uses,” reads the proposal.

That means a building, a photo of which went viral on Twitter earlier this month, with a front door and clear glass bathroom side-by-side wouldn’t be counted as a street-activating use (and would hopefully be prevented by common sense or some other code provision).

My girlfriend just showed me this stunning entryway. pic.twitter.com/k6lBmVC4we

“You don’t want things like storage rooms or locker rooms, even if you have windows [where] you’re going to end up pulling the blinds down all the time,” said Patin.

The Zoning, Neighborhoods & Development Committee unanimously approved the change as part of an omnibus update to the city’s zoning code.

Other changes included: redefining restaurants as to whether they do or don’t have drive-through facilities instead of by service speed; broadening the types of merchandise second-hand stores can sell by right; and more tightly defining commercial uses of a Downtown residential unit.