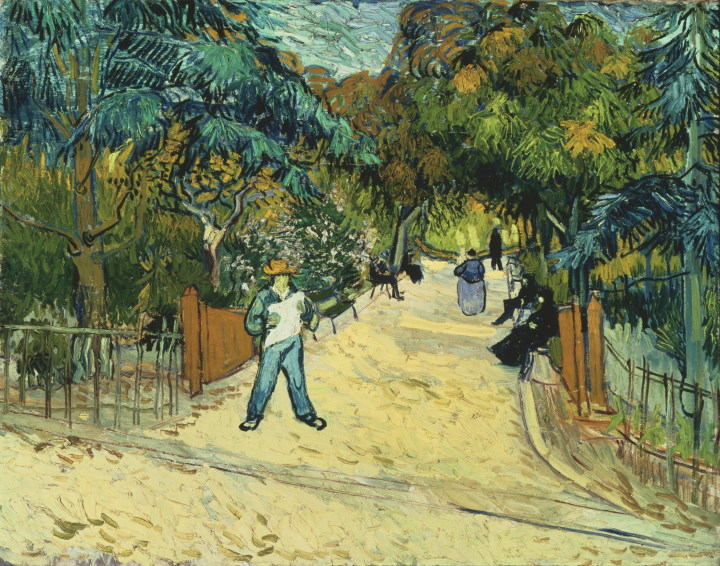 On display in the MAM’s Baker/Rowland Galleries through March 22, A Modern Vision features works by some of Europe’s most well-known artists of the nineteenth to mid-twentieth centuries, including Monet, Manet, Degas, Cezanne, van Gogh, Klee, Kandinsky, and Picasso, as well as lesser-known, but equally important, artists Bonnard, Daumier, Delacroix, Sisley, Dufy, Modigliani, Braque, Morandi, Soutine, Vuillard, de Stael, Morisot (the only female artist in the exhibit), and Caillebotte.

According to the www.mam.org, Phillips (1886-1966) was the founder of the first modern art museum in the nation, located in Washington, D.C., to house his collection. He considered art to be “a universal language” which brought together “congenial spirits among the artists from different parts of the world and from different periods of time.”

Many of the paintings in the exhibit focus on landscapes of the French countryside, still life subjects such as water pitchers and bowls of peaches, and pedestrian, domestic scenes. Vuillard’s 1896 painting “The Newspaper,” for example, depicts his wife reading a newspaper in a tranquil sitting room, while, in Bonnard’s 1921 work, “The Open Window,” a woman sleeps peacefully in a chair in a room decorated in muted orange and pink that overlooks the verdant outdoors. Van Gogh’s summery 1888 “Entrance to the Public Park in Arles” contrasts nicely with Sisley’s wintry, serene “Snow at Louveciennes” (1874). Phillips befriended several artists whose works are included in the exhibit, including the lively Dufy and Bonnard, who was known for his boldly-colored paintings.

Several of the exhibit’s paintings, including Soutine’s 1939 work “Return from School after the Storm,” which features faceless children walking down a green path while thunderclouds loom in the background (a metaphor for the Jewish artist, who was in hiding in Nazi-occupied France), and Daumier’s rebellious “The Uprising” (1848 or later), have political undertones.

Phillips believed that his collection illustrated how “the really good things of all ages and all periods could be brought together, with such delightful results that we recognize the special affinities of artists.” This show offers plenty of that for art lovers, from the Impressionist and Post-Impressionist paintings of Monet, Morisot, Cezanne and van Gogh to the realistic-leaning works of Vuillard and Delacroix, to the abstract still life paintings of Picasso and Braque, to the even more abstract, wildly colorful Kandinsky paintings and geometrically-inspired works of de Stael. You need at least an hour to view the exhibit and take in the many different subjects, read the painting descriptions, and study the diverse styles of painting, though more time will certainly reward the viewer.

Museum visitors can sit on chairs and browse through exhibit catalogues, which also highlight other works in the Phillips collection that are not on display at the MAM. The catalogue, along with other Modern Vision gift items, is available for purchase in the exhibit’s adjoining shop.