They perform better and are supported by most black voters — but opposed by most white Democrats.

Every year, the education policy journal Education Next surveys public opinion on a variety of education issues including charter schools. In its January 2020 issue, it reports that while “public support for charter schools has climbed back to 48% from a low of 39% in 2017,” that support has congealed along partisan lines:

… the political environment for charters is shifting. For more than two decades after the first charter school opened its doors in Minnesota in 1992, charters seemed to be the one choice initiative backed by Democrats and Republicans alike. President Bill Clinton, a Democrat, oversaw the creation of a federal program to support charter-school growth, and his Republican successor, George W. Bush, sought to increase its funding. The Democratic administration of Barack Obama subsequently included charter expansion in its Race to the Top initiative.

The next graph shows how various groups responded to the following question: 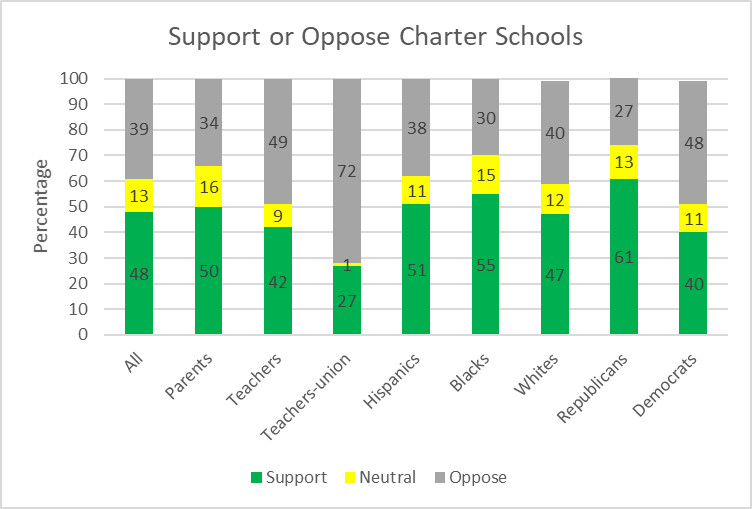 The result shows higher support for charter schools among Republican and black respondents than Democrats. And no group was more opposed to them than members of teachers unions.

How do the students do in charter schools? A recent Data Wonk column looked at the National Assessment of Educational Progress (NAEP) results and found disappointing results for both Wisconsin statewide and in Milwaukee. However, NAEP results are only available for whole states and cities, not by type of school. For that we can turn to Wisconsin’s own testing program, using its “Forward” exam.

Both NAEP and the Forward exams share certain characteristics. For instance, both group student results into four proficiency levels depending on their scores on the exam: Advanced, Proficient, Basic, and Below Basic. Historically Wisconsin’s levels were substantially less challenging than those set by NAEP. Is that still true?

The chart below compares the percentage of Wisconsin students taking the 4th or 8th grade reading (also called ELA for English language arts) and math test scoring at each level according to NAEP and according to Wisconsin’s Forward exam. Each pair of columns compares the NAEP results with their equivalent Wisconsin exam. 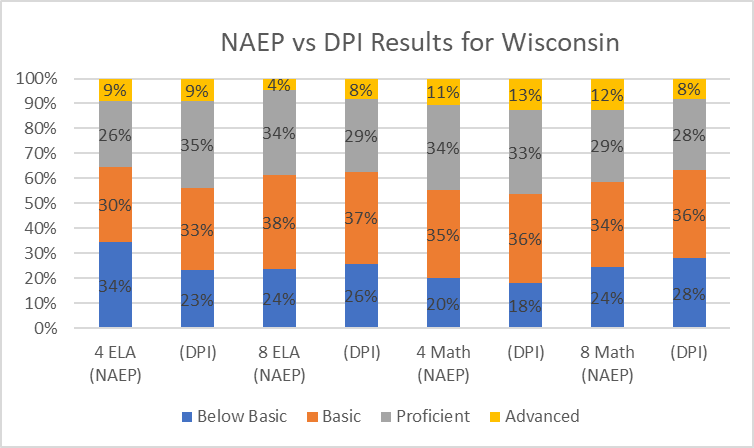 NAEP vs DPI Results for Wisconsin

The results look pretty similar at each grade level, suggesting the recent changes in Wisconsin’s testing regime have largely eliminated the differences in difficulty between the Wisconsin state testing and NAEP. This conclusion is also supported when comparing results for Milwaukee students, as shown below. 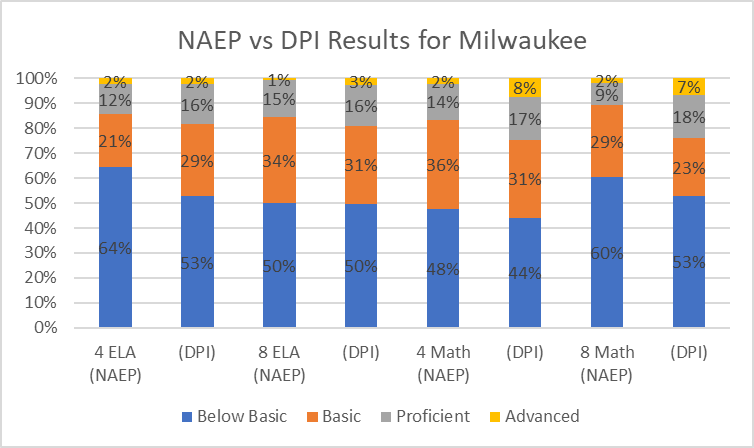 NAEP vs DPI Results for Milwaukee

Because NAEP is based on a statistical sample of 4th and 8th grade students, it does not release results for individual schools. Thus, it cannot be used directly to make judgements about the effectiveness of charter schools. However, the similarity between the distributions of results when measured by NAEP and by DPI for both Wisconsin and MPS suggest that Forward exam results reasonably predict what the NAEP would find if it were applied to all students.

In the following discussion, I look at two classes of Milwaukee charters:

In the following graphs I combined the results from both types of charter schools. I also removed the noninstrumentality charters from the MPS results, leaving traditional public schools. 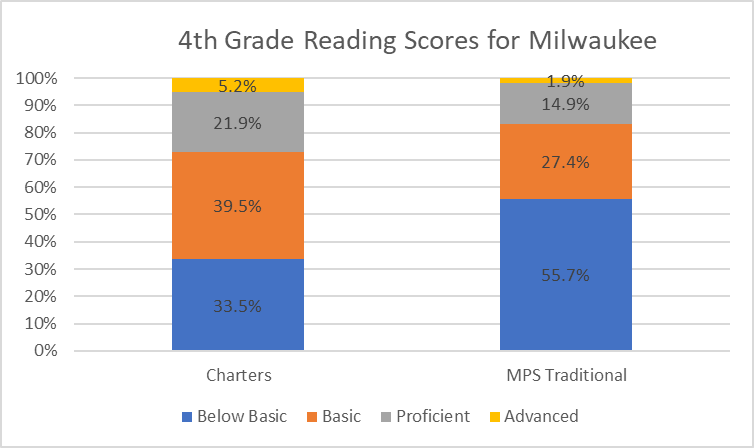 The next chart shows the distribution of 8th grade reading scores. 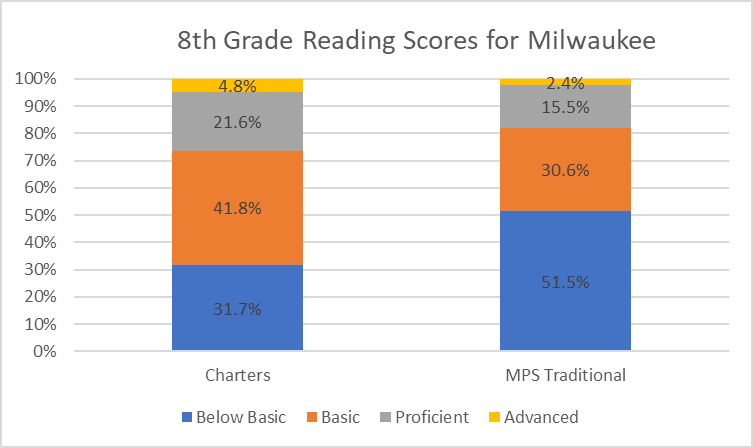 The 4th grade mathematics scores are shown next and follow the same pattern. 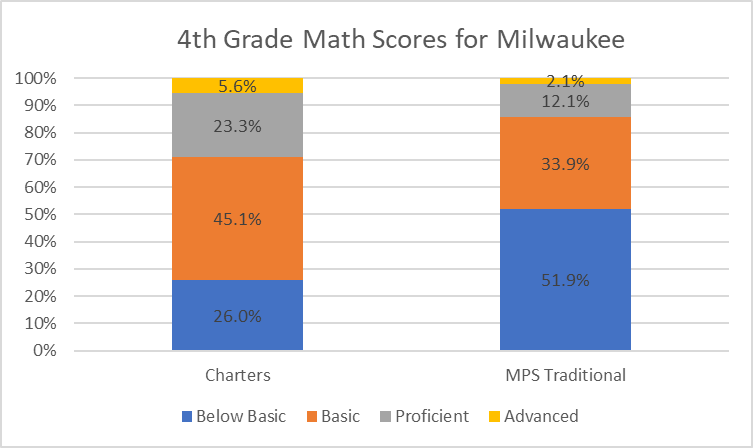 Finally, here is the distribution of 8th grade math scores. 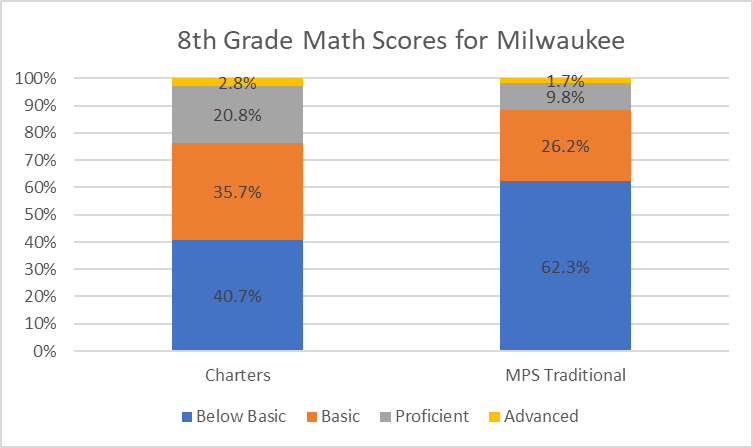 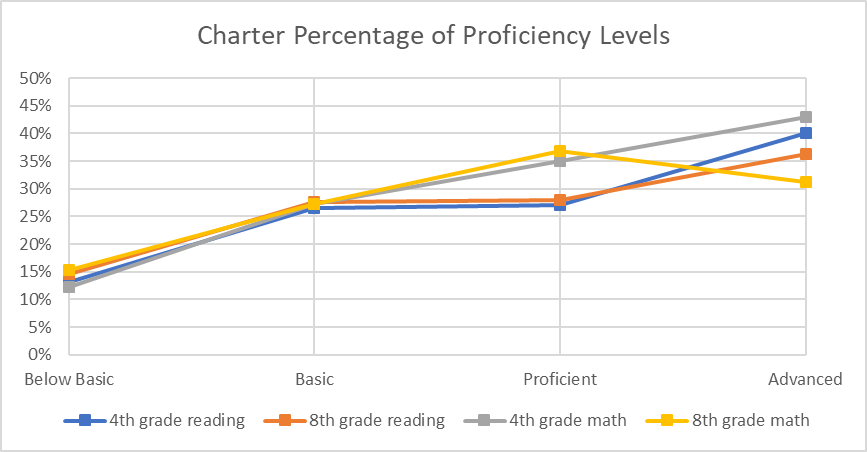 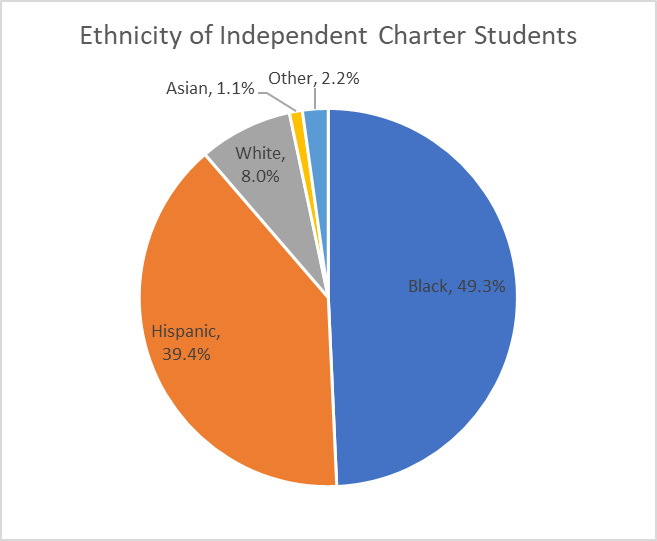 The second question is how the Democratic candidates for president will deal with the issue of charter schools. A look at the poll results shown earlier emphasizes their quandary. Public school teachers in unions are the group most hostile to charter schools. Public school teachers and their unions make up an important element in the Democratic base.

As the Education Next’s Martin West notes in a separate article, “Democratic candidates depend on turnout from African American and Hispanic voters.” Breaking down the survey results “shows that the decline in support for charter schools has been driven entirely by white Democrats. While a plurality of white Democrats supported charters in 2016, they now oppose charters by a 57 percent to 33 percent margin. Black Democrats, in contrast, support charters by a 55 percent to 29 percent margin. The balance of support among Democrats who identify as Hispanic is narrower but still positive, at 47 percent to 42 percent.”

Sometimes the messenger matters more than the message. In 2016, when white Democrats thought about charter schools, they saw Barack Obama, a strong supporter. Today, they may see Betsy DeVos. The result may be driving while and black Democrats in a different direction on this issue.