Did DPI Break the Law?

The Department of Public Instruction appears to have violated state law in order to obscure the performance of students participating in Wisconsin’s school choice programs. Specifically, DPI withheld from timely release data showing a favorable comparison between school choice students and students at public schools.

s. 119.23(11)(d) When the department publicly releases data related to enrollment of, standardized test results for, applications submitted by, waiting lists for pupils participating in or seeking to participate in the program under this section, release the data all at the same time, uniformly, and completely.

DPI’s misconduct, as described further below, normally would be lost in the dark caverns of bureaucratic mischief. Not this time. School Choice Wisconsin (SCW) and the Wisconsin Institute for Law and Liberty (WILL) have filed a formal complaint seeking judicial accountability.

Here’s the chronology that prompted the SCW/WILL legal action:

Early September. DPI notified the media that there would be an embargoed release of assessment data available on September 10 with the “public” release on September 11. Media were required to register for a conference call in order to obtain the data. (SCW/WILL argue that releasing data to the media is the same as releasing it to the public.)

September 11. DPI issued a press release under embargo that used limited data and misleading calculations. Its objective — which it achieved — was statewide media coverage of the incomplete information early in the September 11 news cycle.

The staggered and selective release of data is, on its face, at odds with the statutory requirement that DPI “release the data all at the same time, uniformly and completely,”

Here is the chart that DPI issued on September 10 as part of the embargoed press release: 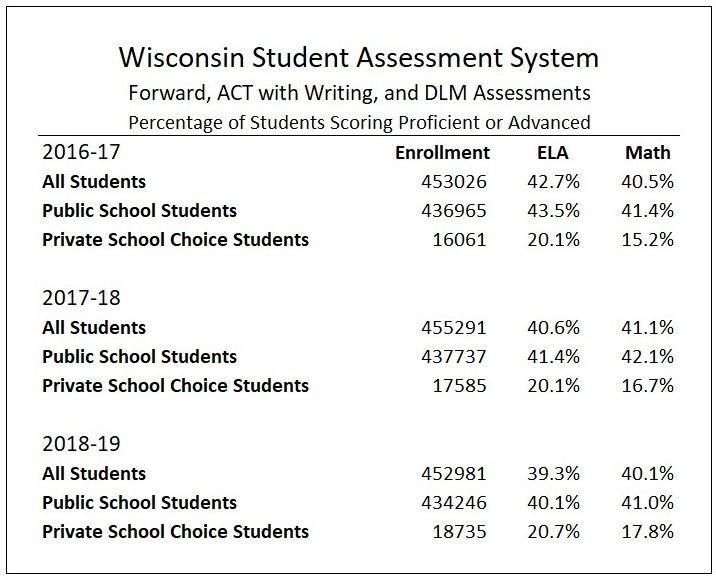 Internal emails at DPI show that there were concerns over the use of the averaging of Parental Choice Programs into a single number well in advance of the September release:

We ran out of time yesterday to discuss the redaction concerns with releasing the statewide combined, public only and choice only data in the press release. This way of PR display has been an ask from the previous Exec. Committee and therefore, the data was reported in this manner during the past couple of years. Can you please let me know the specific concerns with combining the groups so that we can run this by the Exec. Group again?

(While I don’t have access to how Melissa Straw responded to this email, it’s clear that any internal “concerns” about the misleading comparison were disregarded. Noteworthy:  DPI had made similar misleading comparisons in prior years — over the objection of School Choice Wisconsin.)

To illustrate how DPI achieved its objective, consider this report on September 11 from Corrinne Hess of Wisconsin Public Radio (emphasis added):

When complete data were released (belatedly), SCW disaggregated the information to make multiple comparisons of school choice and public school students. One such table, below, compares of students and various public-school counterparts on college-readiness ACT tests.

The comparisons above are NOT readily apparent in the full data sets belatedly released by the DPI.  Rather, School Choice Wisconsin needed to independently disaggregate DPI data to reveal the (positive) comparisons.

Did DPI know of such comparisons? Clearly, it did. Through open records requests, SCW learned that DPI specifically sought and was aware of the data presented in SCW tables. For example, here is a September 6 internal email:

Couple of questions that came up at ERT:

Could you provide a side-by-side comparison between Milwaukee/Racine Public Schools and Choice schools in the Milwaukee Parental Choice Program?

And confirming choice results are results of all choice students who took the tests including non-voucher students?

In summary, DPI specifically highlighted a flawed average calculation and knowingly delayed the full release of data that would allow for a meaningful analysis — one that went contrary to its agenda.

Where has the Journal Sentinel been in all of this? MIA. It dutifully followed DPI’s initial narrative and has never, to my knowledge, reported on the more accurate and more favorable comparisons. I asked the paper’s education reporter, Annysa Johnson, if she or the paper had provided readers with such information.  She declined to respond.

If not for SCW and WILL effectively doing the job of the newspaper, DPI’s willful violation of state law would occur without accountability. Fortunately, there will be a “day in court” to address the actions of a rogue agency.

One thought on “The Contrarian: Did DPI Break the Law?”