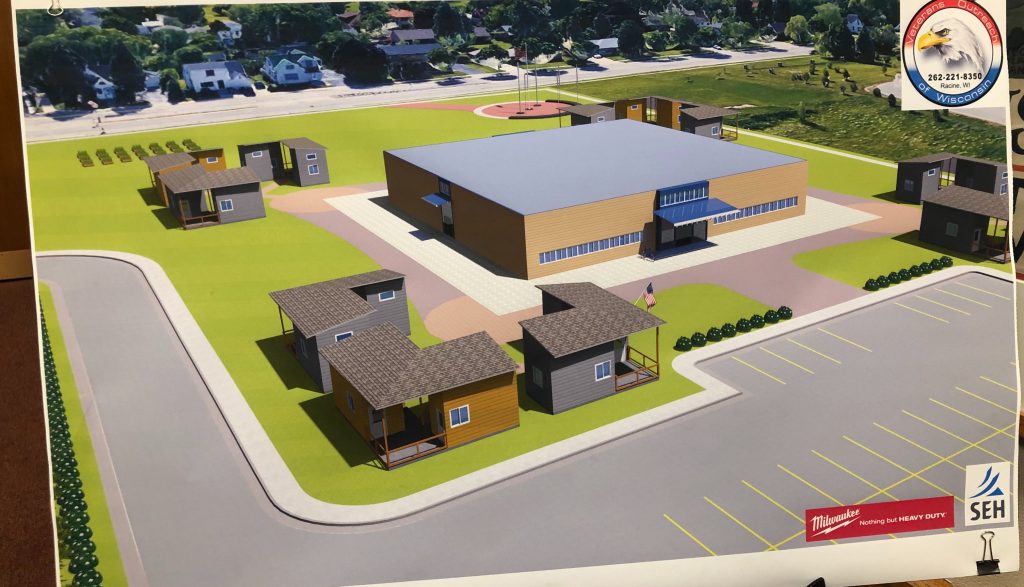 A proposal to develop up to 48 tiny homes for veterans at 6767 N. 60th St. received its final Common Council approval Tuesday morning.

The Common Council unanimously endorsed the zoning package necessary to advance the $2 million development. Construction is expected to begin in spring 2020.

Veterans Outreach of Wisconsin (VoW) will develop the tiny homes and community center on an undeveloped 3.5-acre site between W. Mill Rd. and W. Good Hope Rd. The project is intended to provide support services in a sober-living environment for military veterans that are homeless or facing homelessness.

The project is modeled after a 15-home community VoW operates in Racine. “They’re small, they’re great, but they’re not big enough for them to want to stay forever,” said VoW executive director Jeff Gustin in September when the citizen-led City Plan Commission reviewed the design.

Residents are expected to stay for a period of up to two years while VoW works with them to find employment and permanent housing.

“I’m proud to announce the last time I spoke before you we had eight graduates, now we have nine graduates,” said Gustin last week at a committee meeting of the Racine project.

The homes will be built in clusters of six, with half of the units being handicapped accessible. The accessible units will be 232 square feet while the lofted units will be 172 square feet. The design and material selection for the homes is intended to allow for volunteers and veterans to build and repair the structures according to representatives of design firm SEH.

The homes would include a bathroom but a community center is planned to include showers, meeting spaces and a game room.

“We use the tiny house model because we want our veterans to have something they can have pride and ownership of,” said Gustin. “It’s nothing like a shelter,” concluded Gustin.

W. Green Tree Rd. would be extended west and utilities run into the site as part of the development, allowing the city to pursue the development of the remainder of the 40-acre site.

The proposal next heads to the desk of Mayor Tom Barrett for his signature. Barrett backed the proposal in a July 2019 press conference announcing the deal.

The development would be exempt from property taxes, but terms of the deal proposed by the city would require the organization to make a $2,760 annual payment in lieu of taxes.

A future expansion, which would double the size of the development, would require additional city approval regarding its design. VoW has been approved to acquire the seven-acre site to accommodate both phases for $35,000.

The proposal is the second tiny homes proposal for Milwaukee. Pathfinders proposed a community near E. Capitol Dr. and N. Humboldt Blvd. in 2017 for young adults aging out of foster care that has yet to advance beyond a zoning approval.