Beasts of the Painted World 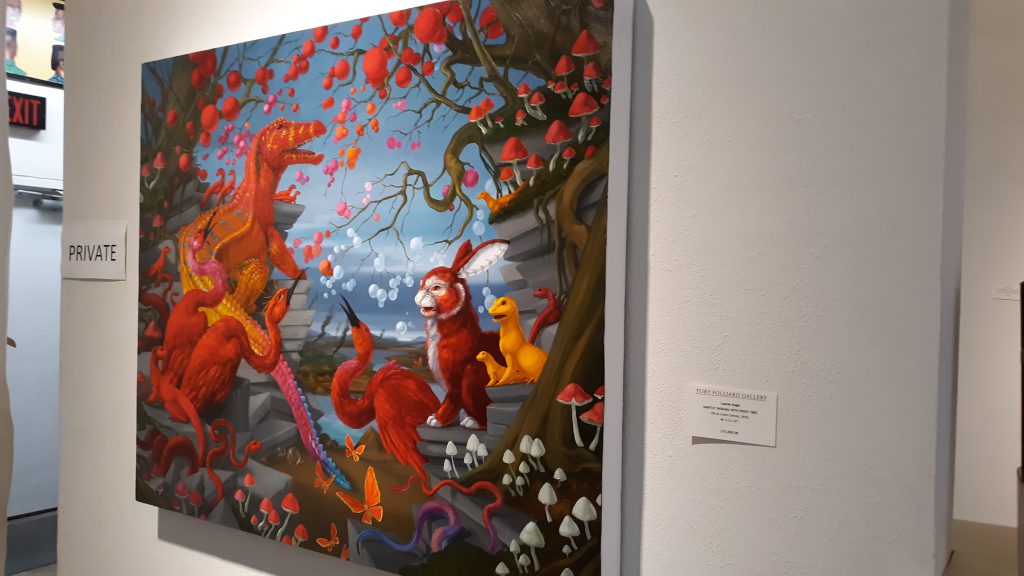 The Tory Folliard Gallery’s current exhibition, Mythic Menageries, features 11 local, regional and international artists whose works capture the duality of the natural world, as a magical place filled with fabulous colors and imagination, but also with dark psychological, environmental, and political undertones.

Siems, Langlois and Sobieski portray their female subjects in harmony with and empowered by nature, living in utopian forests with animals as spirit guides. Sobieski’s departure from traditional portraiture illustrates birds and clouds painted on women’s faces, perhaps to suggest lofty goals and aspirations. Noland’s bold gouche-on-paper works highlight animals highly symbolic to many cultures, such as the lion and the owl.

Mythic Menageries showcases several paintings by celebrated Saukville artist Tom Uttech, whose current retrospective exhibit Into the Woods opened at the Museum of Wisconsin Art October 12. In his meditative paintings, Uttech embraces the remote beauty of North Woods landscapes in Wisconsin and Canada, which he’s spent significant time exploring. Like many other Mythic Menageries works, the paintings explore how changes to natural habitats effect animal and plant species. In one of Uttech’s large-scale paintings, a figure with a deer head and a human body hugs its knees, perhaps in desperation.

Chatterly’s “Big Blue Dog” sculpture, a 70-inch canine with impossibly long forelegs, stands sentry in a corner near the windows while another small dog sculpture sits next to it. Is the canine fulfilling his “watchdog” duties, protecting the gallery’s works?

“The thread connecting all of these artists is undeniable, but it is their differences and uniquely individual visions that are the strength of this group,” writes Stonehouse in the exhibit statement. “Their common interest in the expressive and conceptual efficacy of animals as a subject links their works together, but the highly internalized content and personal richness of their imaginations are evidence of the continued relevance of animals and the natural world as worthwhile territory for the artists to explore.” 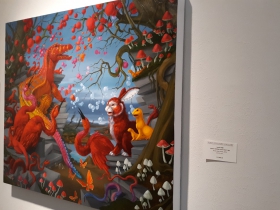 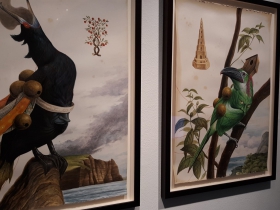 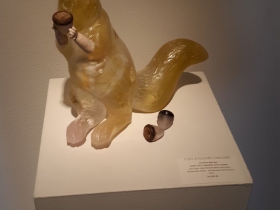