By Wisconsin Democracy Campaign - Oct 29th, 2019 02:47 pm
Get a daily rundown of the top stories on Urban Milwaukee 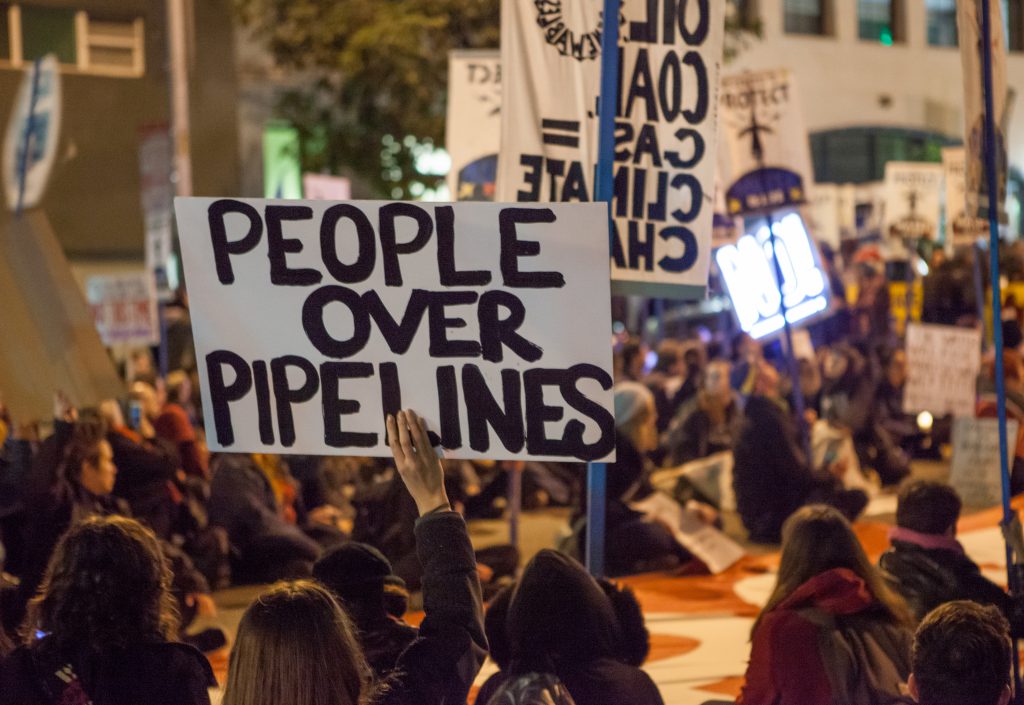 Protesters against the Dakota Access Pipeline and Keystone XL Pipeline hold a sit-in in the street next to the San Francisco Federal Building. Photo by Pax Ahimsa Gethen (CC BY-SA 4.0).

Two bills that would make it a felony to trespass on pipeline property or damage oil, gas, and water pipelines are drawing a host of special interest support, including business and unions, which often butt heads on state policy.

The measures, Assembly Bill 426 and Senate Bill 386, were introduced last month with bipartisan support and a lot of criticism from environmental activists and Indian tribes. Both bills have received public hearings and AB426 has already been approved by the Assembly and sent to the Senate.

Supporters say the bills are necessary to discourage vandalism that damages or disrupts the delivery of oil, gas, and water, as well as protect pipeline workers who could be injured or worse from job-site vandalism.

Opponents say the bills would suppress legitimate protests like the Standing Rock protest over the Dakota Access Pipeline two years ago. They also say the bills could inhibit hunting and recreation and activities by landowners on land that pipelines cross.

Opponents also say the proposals are ALEC-inspired bills similar to those introduced in about 20 other states in recent years. ALEC (the American Legislative Exchange Council) is a pro-business bill mill created in the 1970s to unite powerful business interests with mostly GOP and conservative state legislators around the country. They meet to develop “model legislation” that state policymakers can tweak and introduce in their home states.

But bill backers, like Democratic Sen. Janet Bewley, of Mason, said AB426 and SB386 are notably different from ALEC’s model legislation. She pointed to the exemption for union organizing and striking as something ALEC would not support.

The bills carry penalties of up to six years in prison, up to a $10,000 fine, or both. These penalties would match penalties in current law for people convicted of trespassing and damaging utility property and operations.