By Ruth Conniff, Wisconsin Examiner - Oct 22nd, 2019 05:25 pm
Get a daily rundown of the top stories on Urban Milwaukee 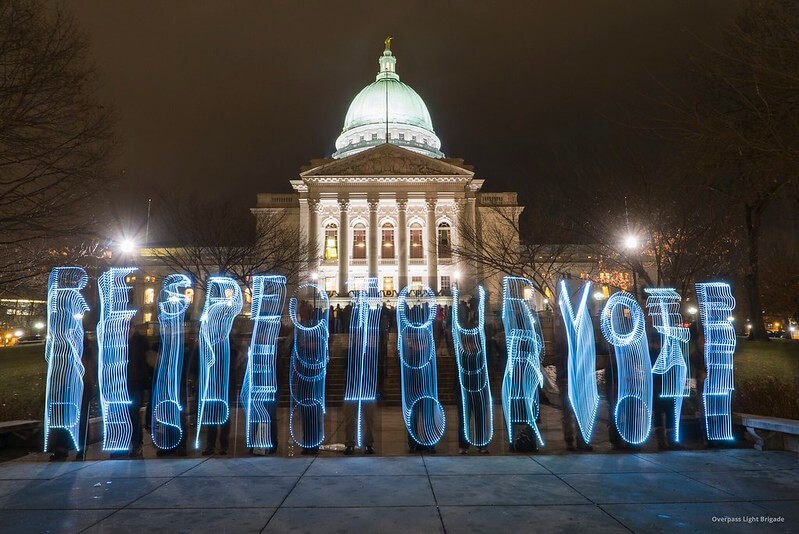 The State Supreme Court heard arguments Monday having to do with the December 2018 extraordinary session in which the Republican legislature passed laws taking away powers from incoming Democratic Gov. Tony Evers and Attorney General Josh Kaul.

In the case under appeal, Service Employees International Union (SEIU) Local 1 v. Robin Vos, the plaintiffs argued before Dane County Circuit Court Judge Frank Remington that the new laws passed in that lame-duck session violated the separation of powers in the Wisconsin Constitution. They also sought a temporary injunction so that the executive branch could continue to perform the duties limited by the new laws.

The Supreme Court, in taking the case, granted the defendants’ request to lift a temporary injunction issued by the circuit court, and also agreed to consider a motion to dismiss the entire lawsuit.

“Allegations that a statute violates the separation of powers are extremely important,” attorney Lester Pines, representing Evers, told the Court.

Quoting George Orwell’s Animal Farm, Pines said, “The legislature’s position is there are three equal branches of government, but some are more equal than others.”

Pines was particularly concerned about the legislature inserting itself into the rule-making process by state agencies.

Who writes the rules?

The issues before the Supreme Court in the hearing on Monday included requirements that the attorney general obtain approval from a legislative joint committee before dismissing or settling lawsuits, as well as rules imposing legislative authority over “guidance documents” issued by the administrative agencies, and a provision authorizing a joint legislative committee to suspend an agency rule or regulation.

All seven of the justices asked questions focusing on the proper role of the executive and legislative branches.

“That’s exactly what I was asking,” Justice Annette Ziegler chimed in.

“When the legislature intervenes and the governor or the attorney general is in the case, the voice of the state is divided,” Tseytlin replied.

“It’s a hybrid situation,” he said later, using a phrase he returned to frequently during the hearing.

How many branches of government?

Tseylin’s argument hinged on the idea that the attorney general is not part of the executive branch because the state constitution gives him an “administrative” as opposed to an “executive” role. Justice Walsh Bradley expressed skepticism about that distinction—and the idea that there might be a fourth, “administrative” branch of government defined by the state constitution.

Walsh Bradley pointed out that the same clause also covers county executives, among other offices. “So your argument is because it comes under the heading ‘administrative,’ the chief executive officer is not executive.”

Matt Wessler, a Washington, DC attorney who joined from outside the state bar to argue on the executive branch’s side, told the court that the founders defined the attorney general, secretary of state and other offices as “subordinate executive officers.”

The legislature, he said, has the power to proscribe the attorney general’s powers by statute, but “what they can’t do is convert the executive’s authority into their own authority to enforce the law.”

“I think when the founders used the term ‘subordinate,’ they meant it falls within the executive branch,” Wessler said. Kelly seemed unsatisfied with that.

There was a lot of discussion of guidance documents issued by state agencies, which Pines insisted were an important part of the governor’s executive power. “The only branch of government that has the power to give advice is the executive branch,” Pines said.

“Clearly, the governor is in charge of the administrative agencies for the purpose of giving advice,” he added.

Justice Brian Hagedorn asked for the “most innocuous example of a guidance document.”

Justice Walsh Bradley broke in to say that “stopping at stop signs” might be viewed as more innocuous.

Tseytlin waved that away, saying it was not an example of guidance.

After a short break, Attorney General Josh Kaul began his testimony, declaring that “the framers knew the separation of powers is absolutely essential . . .”

“Where do you fit?” Justice Ziegler interrupted. “Are you executive? Legislative? You’re not judicial …”

Kaul replied that his office is “exclusively executive,” along with county executives, district attorneys, sheriffs—all executive offices with responsibility to enforce the law.

Brian Hagedorn asked if “there are some unique situations where the legislature might have a stake” in intervening in lawsuits that involve the attorney general’s office.

Yes, Kaul answered, the two areas of that touch on legislative powers, he said, are the “power of the purse” and the legislature’s interest in passing laws.

“If we were to enter into a settlement agreement that required an appropriation, that could create a constitutional conflict,” he said. “But that’s not the case here.”

Wesler advised the court that other state supreme courts have held that the authority to enforce the law is “as core an executive power as it gets.”

“What you have here is a set of laws that are designed to breach the bright line” between who makes and who enforces the laws, he added.

He urged the court to “take seriously the potential consequences” of its decision.

The Court’s 5-2 conservative majority has been considered a friendly forum for the legislature’s Republican majority. But questions from conservative justices Ziegler, Rebecca Bradley, Kelly and Hagedorn raised concerns about the limits of legislative power.

“Surely [the constitution] can’t mean the only person who can exercise executive power is the governor,” Hagedorn mused.

“Do you think the legislature could take the attorney general and reduce his power to only sit on the Board of Lands?” Kelly asked.

Afterwards, Kaul said of the justices, “It was great to see how engaged they were. And I think you’ll get a decision that is consistent with the justices’ view as to what the constitution says.”