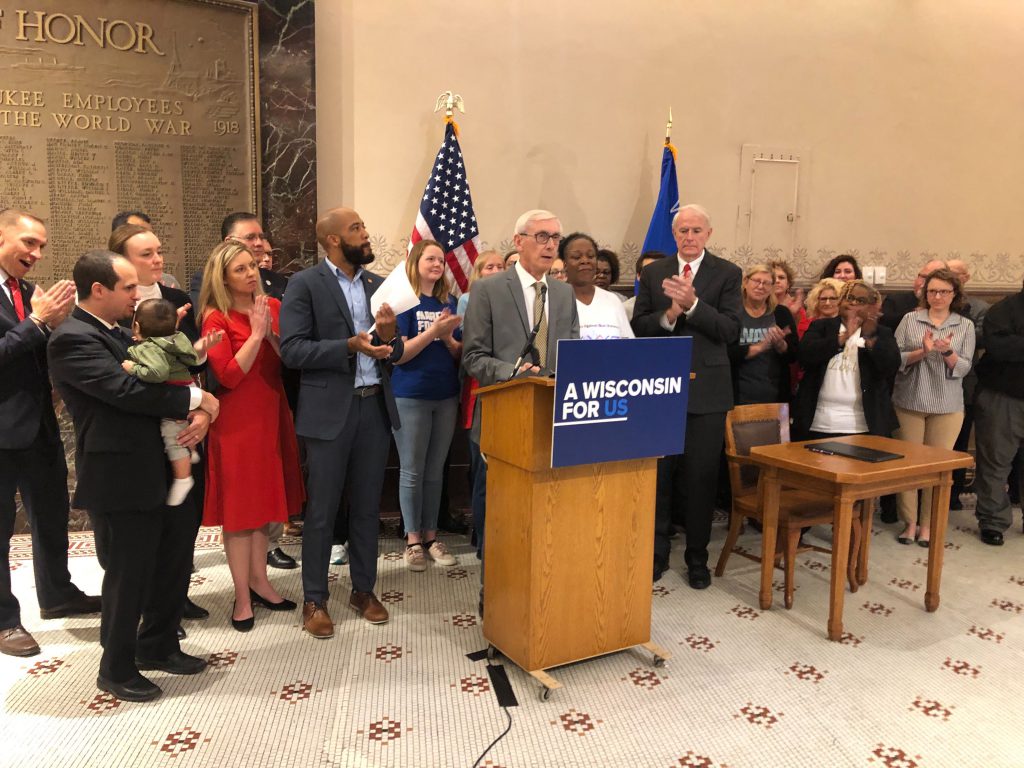 Gov. Evers calls for a special session of the Legislature. Photo by Jeramey Jannene.

Evers would like to see the state implement universal background checks and establish a “red flag” law allowing the state to temporarily remove guns from the possession of someone who may present a danger to others or themselves.

In a press conference at Milwaukee City Hall, Evers, flanked by Lieutenant Governor Mandela Barnes, Mayor Tom Barrett, much of the Milwaukee state legislative delegation and gun control activists, called on the Republican-controlled Legislature to act on his two proposals.

“These are common-sense solutions that we know can save lives because they have already done so in states they have implemented them,” said Evers.

“How many times can you go essentially against 80 percent of the people of the state of Wisconsin and essentially tell them to ‘go to hell’ and expect to be re-elected? It doesn’t make sense to me,” said the governor of Assembly Speaker Robin Vos and Senate Majority Leader Scott Fitzgerald.

Barrett and activist Debra Gillispie shared stories of ways Evers’ proposal would have saved lives. Gilispie’s son was killed in 2003 by someone that she said would not have been able to purchase a firearm if universal background checks were required. Barrett said a similar thing was true of the 2012 Azana Spa shooting in Brookfield.

“It is time for us or recognize the pain of so many victims’ families,” said Barnes.

Fitzgerald didn’t waste any time responding. In a brief statement, the Senate leader said: “It’s easy to see how today’s action could just be the first attack on the Second Amendment. The Senate will not be part of a drawn-out strategy to infringe on constitutional rights.”

The Legislature is not required to take up the bills during the session and could vote to immediately adjourn. But Evers said he would consider calling another special session until something was done to address the situation.

“We have two people in the state of Wisconsin that stand between us and common-sense gun regulation,” said Evers about Vos and Fitzgerald.

“Will this be the answer, be the end-all, be-all, no. But it’s a great first step,” said Evers when asked about crimes with illegally-obtained firearms.

Barnes noted that the issue doesn’t impact just Milwaukee. Evers is also scheduled to travel to Wausau and Green Bay to announce the special session.