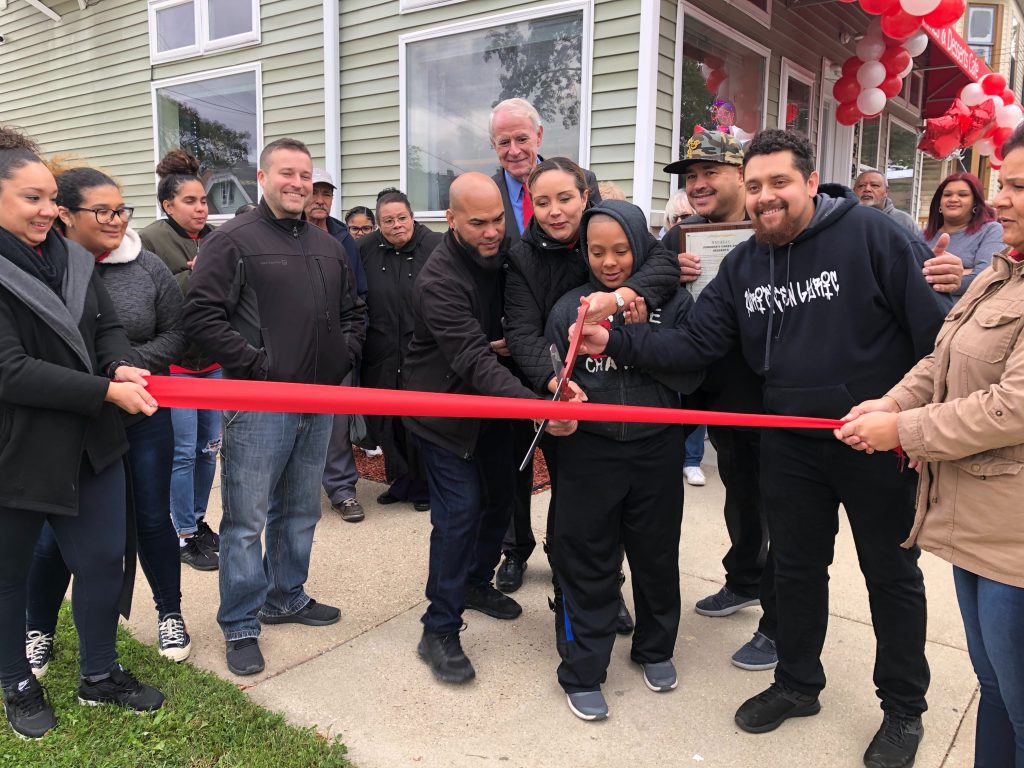 Johanna Ortiz and her husband Juan Ortiz cut the ribbon on Johanna’s Cakes and Desserts while surrounded by friends and family. Photo by Jeramey Jannene.

Johanna Ortiz celebrated the opening of her bakery and cafe, Johanna’s Cakes & Desserts Cafe, at 1239 S. 11th St. near W. Greenfield Ave. The cafe serves a variety of Puerto Rican treats and cakes as well as sandwiches.

Ortiz and her husband Juan were approved to buy the building from the city in 2016 for $30,000, but encountered a number of problems along the way including a failing foundation and electrical wiring issues.

“If you asked me two months ago if it was worth it, I would have said no, but today, yes,” said Ortiz in an interview with Urban Milwaukee.

The city is supporting the $320,365 project through its Commercial Foreclosure Property Renovation Fund and a white box grant. Both programs are administered by the Department of City Development‘s Commercial Corridor Team.

“We have been through a lot to be here, but we are happy,” said Ortiz moments before she ceremonially cut a ribbon to mark the cafe’s opening. She was surrounded by family and friends as well as Alderman Jose G. Perez and Mayor Tom Barrett.

Ortiz has grown her business from an at-home bakery with orders coming in over Facebook. She said the bricks-and-mortar location was a result of the business’s continual growth. Before opening the cafe Ortiz worked as a parent coordinator for Milwaukee Public Schools.

The menu includes everything from quesitos, a cream cheese-filled pastry, to paninis. Custom cakes are also available.

The cafe features tables for sit-down dining, a counter for to-go orders and a kitchen. An apartment is located on the building’s second floor.

“This is a catalytic project. This was blight. Now it’s beautiful,” said Perez of building’s restoration. Reflecting the diversity of the neighborhood, Perez’s remarks were delivered first in Spanish, then in English.

Barrett praised Ortiz’s commitment to the project despite the challenges. “As the mayor, I can tell you I don’t love owning these old buildings,” said Barrett. The city acquired the 2,430-square-foot building in 2012 through property tax foreclosure. The building, formerly a bar, had been vacant for a number of years prior to the city’s acquisition.

The cafe’s regular hours are 7 a.m. until 6 p.m. on Tuesday through Saturday and 7 a.m. until 3 p.m. on Sunday. The cafe is closed on Mondays. More information is available on the business’s Facebook page. 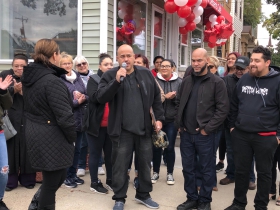 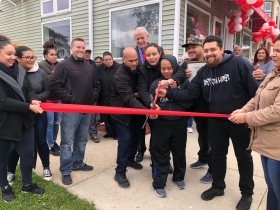 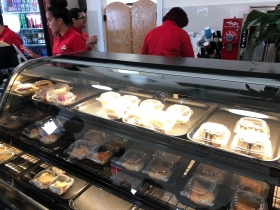 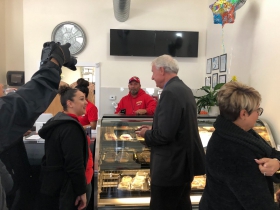 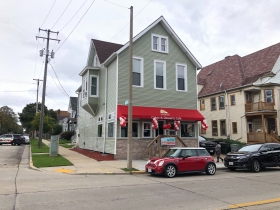 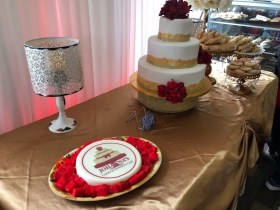