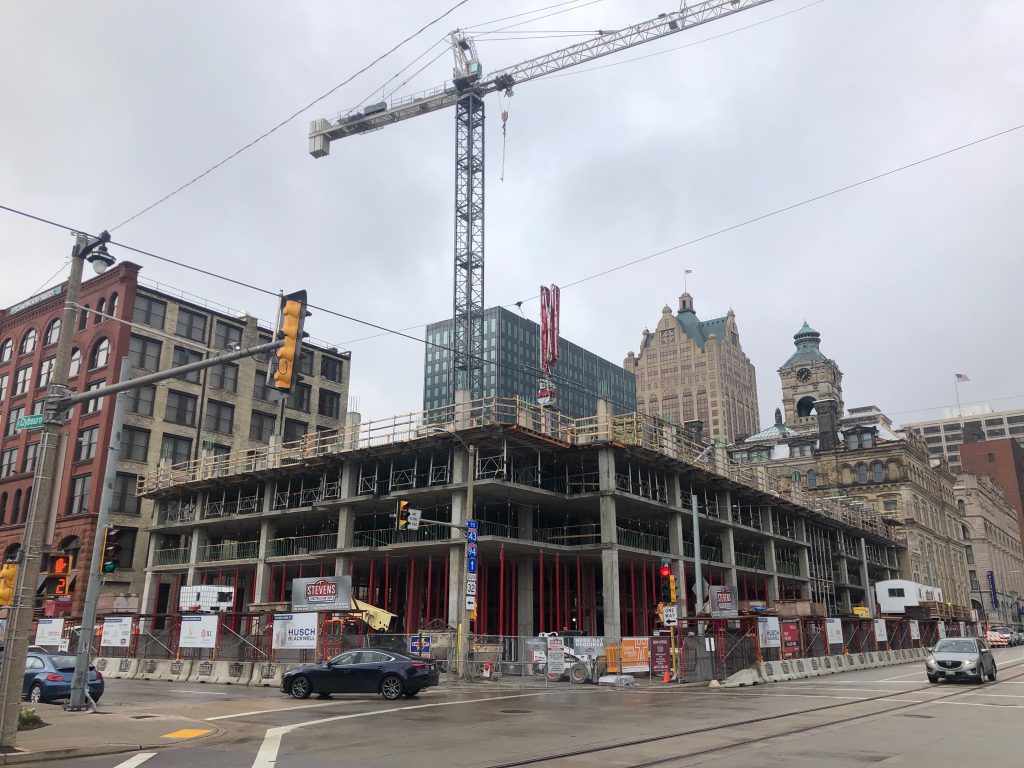 A downtown dead zone will soon be no more.

Construction work has reached the third level of the 11-story Huron Building at E. Clybourn St. and N. Broadway.

Besides being a place of business, the new building at 511 N. Broadway will serve as a link between the Historic Third Ward and East Town neighborhoods. The $60-million project replaces one half of a block of Broadway where a street-deadening surface parking lot was across the street from another surface parking lot. A streetscaping project, funded by increased tax revenue from the development, will further enhance the connection with lighting under Interstate 794.

The office building will be anchored by law firm Husch Blackwell. The firm will lease 71,000 square feet for 180 employees in the building. Its office space will be built with a variety of “me” and “we” spaces, intended to balance the need for private offices with a growing push for spaces for collaboration in modern office layouts. The firm, headquartered in Kansas City, believes the office design will be an asset in its future recruitment efforts.

Although its an entirely new building, the project required vetting by the Historic Preservation Commission because it is located within the East Side Commercial Historic District. The commissioners and project architect Engberg Anderson Architects took special care to make sure the materials and height of the building lined up to the adjacent Mackie Building, an earlier project of Jeffers. The massing was also kept in line with the Button Block building, now a Homewood Suites hotel, immediately west of the Huron.

The five lower floors of the building are shorter than those above due to their use. The first five levels will be used for parking and street-level commercial space, while the six upper floors will contain office space.

Joshua Jeffers raised $14 million from more than 400 investors for this project, including $10 million in the first 80 minutes on crowdfunding platform CrowdStreet. The project relies on $21 million in equity. Associated Bank is serving as the primary lender.

A groundbreaking for the project was held on May 2nd, with rainy weather not that dissimilar from today.

The construction comes after a four-year design process that included the project going from a conceptual plan to a seven-story apartment building, then a nine-story office building and finally an 11-story office building. Since the groundbreaking, Jeffers has been back to the commission to get approval for more balconies in the building’s northeast corner. Another variance is pending for a minor change to the materials in portions of the building’s facade. The commission is scheduled to hear that change on October 14th.

Construction on the project is being led by Stevens Construction. Work is scheduled to be completed by summer 2020. 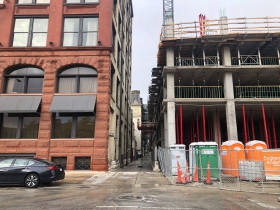 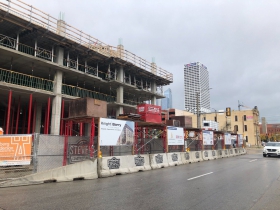 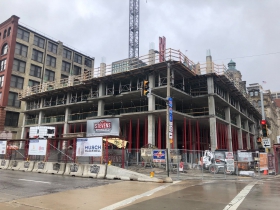 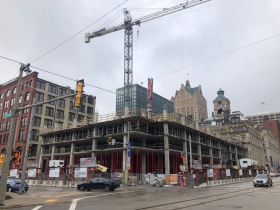 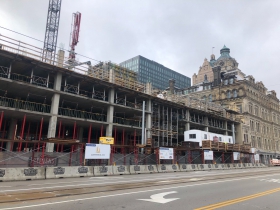 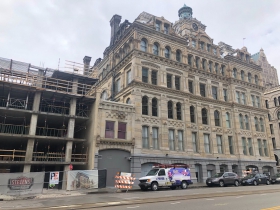