This spot is worth the wait on weekends. The extensive menu and interesting decor does not disappoint. 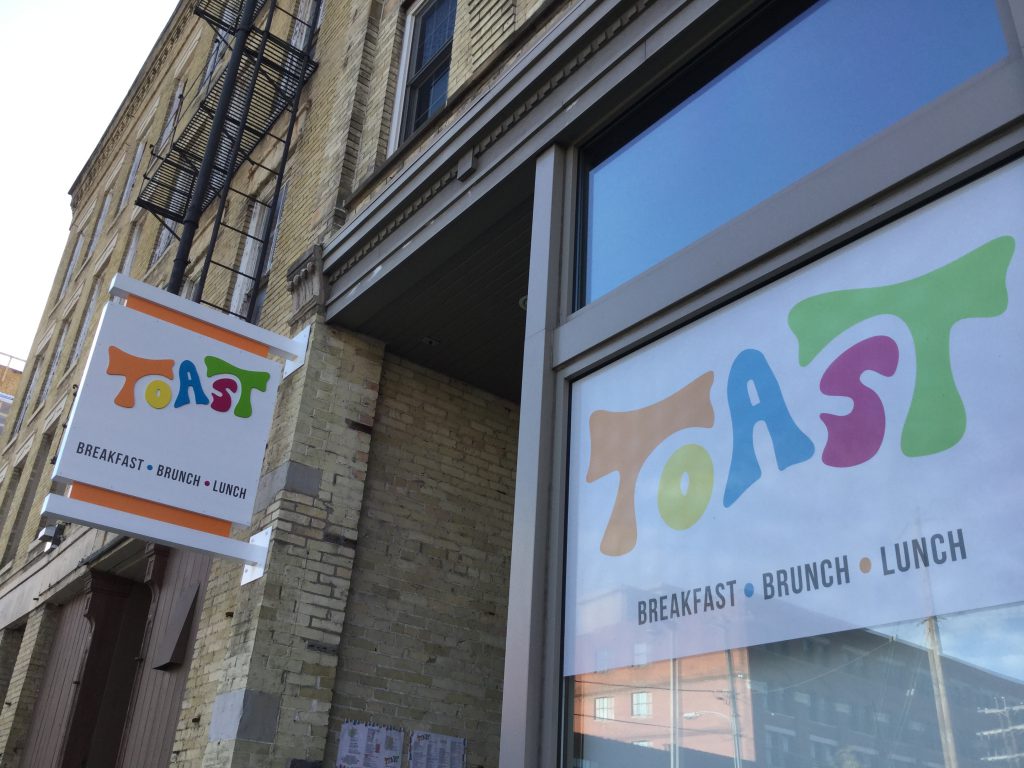 In March 2018, Toast opened in Walker’s Point, an obvious place to grab breakfast or brunch as evidenced by the name. It quickly became the new hot spot, especially on weekends, when you might have to practice the art of patiently waiting for a table. That said, it’s worth the wait, as the extensive menu includes options not oft seen in local restaurants.

For Sopes Verduras, an unusual take on a classic Benedict, corn sopes substitute for English muffins. My companion’s sopes were layered with white bean spread and corn relish, then topped with poached eggs and chili lime hollandaise. Cotija cheese and a burst of cilantro finished the dish. Hash browns on the side filled the plate, making an impressive mix of contrasts, with the potatoes adding crunch, a memorable brunch entrée.

Other Benedicts, all served with a choice of potato, included Barbacoa, pulled beef with poached eggs, and poblano hollandaise, the Classic, with Canadian bacon, and the Crab, two Maine Stone crab cakes on an English muffin.

Corned Beef Hash, a Killer Classic, made with chunky red potatoes seasoned with rosemary, was topped with plentiful hollandaise and (my choice) two scrambled eggs. It was a tasty “Classic” that could have included more of the delicious juicy chunks of corned beef in the mix.

Other Killer Classics include Huevos Rancheros, Chilaquiles, Chicken and a Waffle, a Chicken Sausage Skillet, and Southwest Steak and Eggs with avocado, pico de gallo, eggs any way, potatoes, and toast.

For more breakfast entrees, check out the Far Out Omelets. My companion liked her Mushroom, Arugula, and Gouda Omelet, mainly because the chef loaded it with wild mushrooms, nicely seasoned with a mix of herbs including thyme, and just a whiff of garlic.

Not into mushrooms, order the Chorizo Omelet with pico de gallo, cheddar, black beans, and queso fresco, or the Loaded with mushrooms, bell peppers, ham, bacon, herbed potatoes, and cheddar. For the health conscious, there’s an Egg White Omelet filled with veggies along with queso fresco.

On the French Toast menu, Lemon Berry Croissant with lemon cream anglaise, and the Stuffed with ham, eggs, bacon, and jam, sound awesome, but how can one resist Dulce de Leche French Toast with caramel sauce. They serve it with bananas, strawberries, and a sprinkle of coconut, a breakfast dessert to savor.

Here’s an insider’s hint. From Starters, the Donut of the Day often sells out, especially on weekends, as my companions and I learned at Sunday brunch. If you need something else sweet, order the Maple Bacon Pull Apart Bread, to share, and revel in the freshly baked cinnamon roll with its delectable-maple-bacon glaze.

Lunch is also an option. You can get a Grilled Cheese, a Torta, a Burger two ways, the Gooey Brunch Burger with jalapeno, beer cheese, and haystack onions, or a Bolillo Burger with chorizo, pepper jack, and crispy onions.

Drinks are listed on the backside of the placemat/menu where you’ll find Bellinis, Mimosas, and Marys. There are also a couple of Mules, a Margarita, coffee, tea, and soft drinks aka Fizzy Pops.

These scrumptious meals take place in two rooms and a loft that sparkles with cheerful orange painted walls. They are served by a waitstaff wearing colorful tie-dyed tees. The meals are served on colorful plates, and the Kona Coffee comes in large colorful mugs. There’s a theme here and it’s not black and white! Album covers from the 60s, 70s, and 80s, decorate a back wall, a walk through a musical memory lane with Diana Ross, Moody Blues, and Dick Clark’s Rock and Roll Remember.

All this and more, good food, friendly servers, great vibes everywhere, and memories on the wall, make this a destination for a happy meal to be savored at Toast on Second Street. 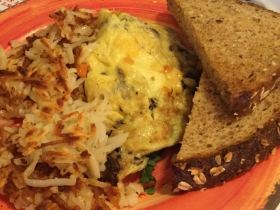 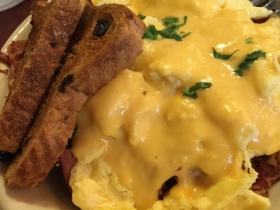 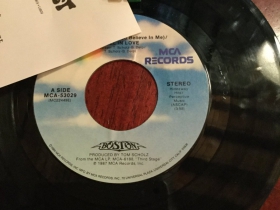 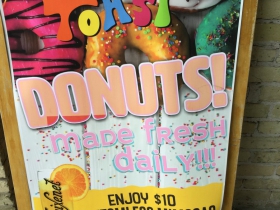 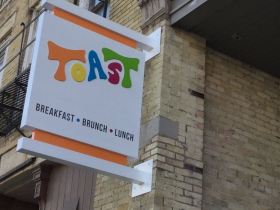