A World of Crazy Colors 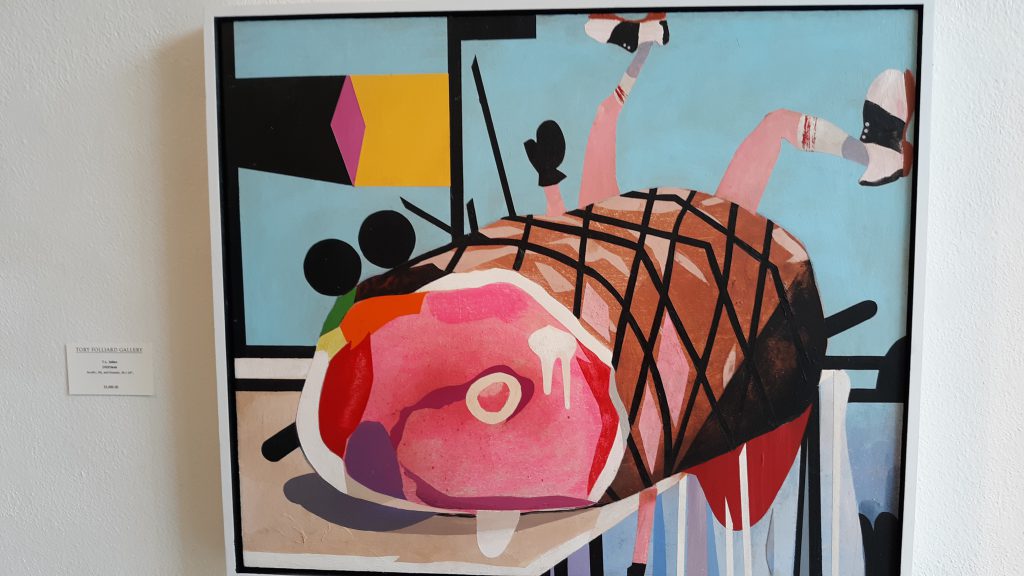 Solien’s work was also displayed in the gallery’s recent exhibition, Nature Morte, named after one of his still life paintings.

For more than 40 years, Solien, also a professor of painting and drawing at UW-Madison, has incorporated touches of Americana (of which the artist is a collector) and sociopolitical symbols into his figure paintings, which feature uneasy subjects often struggling with emotional dilemmas.

Solien’s latest exhibition “continues this tradition by pulling viewers into his disquieting orbit of sardonic still lifes, landscapes, and portraiture,” the gallery’s description suggests. Solien favors bold colors, with many of his paintings set against bright blue backgrounds. His paintings, created with oil, acrylic and enamel paints, are absorbing and arresting. According to Becca Sidman, assistant director of the Tory Folliard Gallery, Solien personally hung the paintings lower than normal so the viewer gets the sense of being able to “walk into” them.

The artist pays tribute to cultural movements and fads, such as the fascination with all things Western that gripped America (especially younger people) in the 1950s. Solien also likes to paint contradicting landscapes. “Boy with Paint,” for example, depicts a horse-riding figure dressed in pirate garb, wearing a sailor’s cap, against a backdrop that’s one-part desert, one part urban.

“Not Fade Away” could be a nod to flower power and the hippie moment; a tribute to rock stars like Janis Joplin, Jim Morrison and Jimi Hendrix, who all died prematurely at the age of 27 in the early 1970s.

Solien often paints lone figures, but works like “Boy With Calico Girlfriend,” featuring a figure in a red robe with x’s for eyes, standing next to a dour-looking calico cat wearing a beret, hint at unsatisfying, troublesome interpersonal relationships. Does the cat take the place of a human love interest, or could the cat suggest human qualities, such as fickleness, pride and independence? “Greensleeves” portrays a clothesline with clothes, as well as a fox, hung upside down in the forefront of a tall apartment complex.

Sports and competition are recurring motifs in Solien’s works. Works such as “Hail Mary” and “Forest Fighter” depict athletes. Boxing gloves, which could represent external or internal conflict, appear in several of Solien’s paintings, including “Greensleeves” “Le Souris Morte,” and “Boy On Paint.”

The artist’s still lives — “Nature Morte,” “Theorem,” and “Le Souris Morte,” for examples—depict half-eaten fruits, a handbag bursting with forgotten household items, and geometric shapes, such as crisp black circles, reminiscent of graphic arts. In “Nature Morte,” Solien perhaps comments on American holidays and how they are faithfully observed. The painting portrays a Thanksgiving turkey with what appears to be white-gloved hands. The “gloves” could also represent the perceived formality of the holiday, or at least how it was observed years ago.

“Collectively, the paintings, works on paper and objects, will exist as ‘episodes,’ or ‘vignettes’ illuminating an ‘allegorically’ expansive narrative, in which the subjective concerns within the depicted culture weave through interpersonal moments of intellectual and emotional crisis,” concludes Solien in his artist statement. 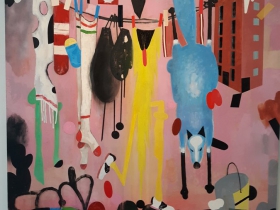 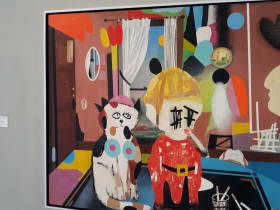 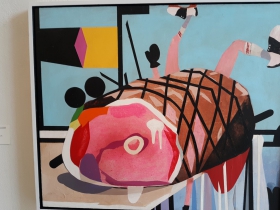