Governor said he would call a special session if Republicans don't act.

By Shamane Mills, Wisconsin Public Radio - Sep 25th, 2019 11:07 am
Get a daily rundown of the top stories on Urban Milwaukee 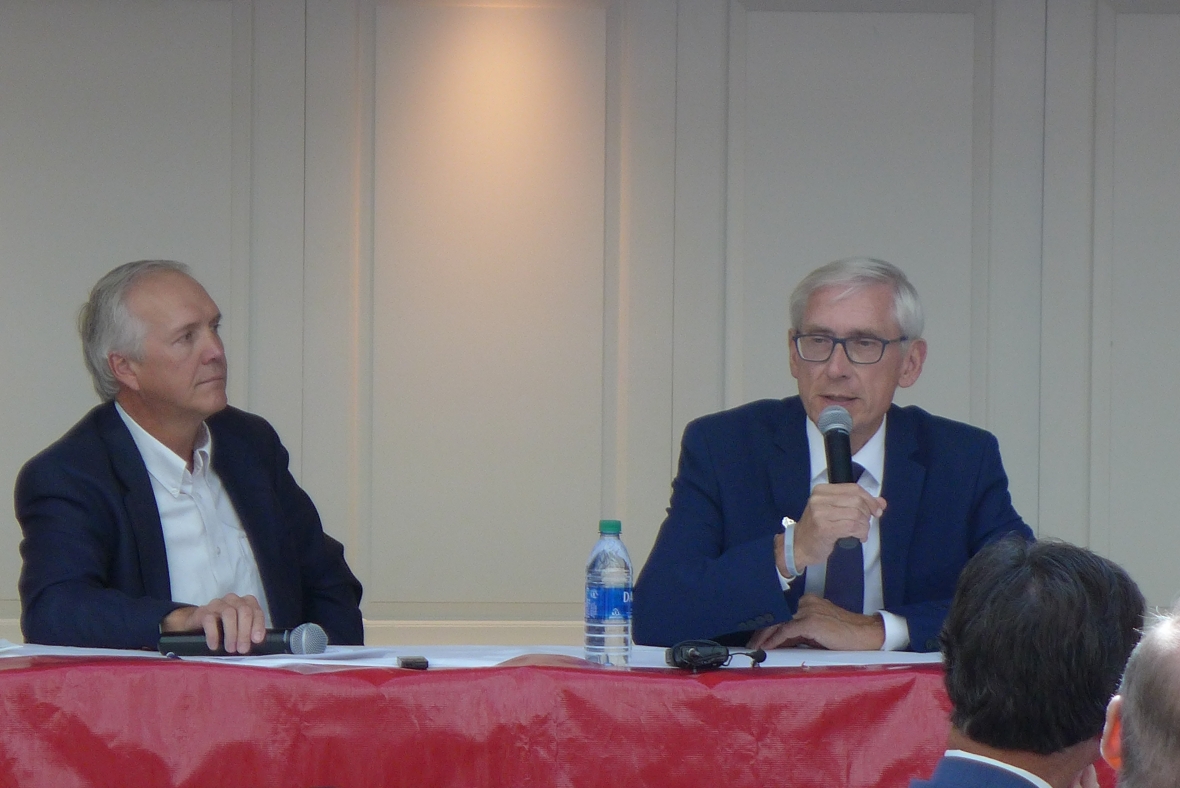 Gov. Tony Evers discussed the upcoming democratic convention in Milwaukee at a WisPolitics event Sept. 24, 2019. But the democratic governor refused to weigh in on impeachment of President Donald Trump, saying he was focused on the state. Photo by Shamane Mills/WPR.

Gov. Tony Evers said Tuesday he wants new laws on guns, but his proposals aren’t what some Republicans have suggested.

“My goal is to work on two things we know the people of Wisconsin want: universal background checks and making sure that people that are struggling with mental issues and are deemed to be dangerous by a court of law have their guns temporarily taken away from them,” Evers said.

Democratic presidential candidate and former Texas Congressman Beto O’Rourke has suggested a gun buyback program for assault weapons. Evers said while he would look at all gun legislation that might come before him, such a proposal is not going to happen. Likewise, Republican leaders have dismissed Democratic calls for so-called “red flag” laws and expanded background checks.

Evers has called on lawmakers to take up the bills proposed by him and his Democratic colleagues, and said at a WisPolitics luncheon Tuesday in Madison he might call a special session if Republican leaders don’t.

Also at the luncheon, Evers demurred when asked if he thought President Donald Trump should be impeached, saying that’s up to Congress and he wants to stay focused on Wisconsin.

“We have to find a way to move forward as a nation. So hopefully there will be some sort of resolution,” Evers said.

Democrats in Congress have been calling for an impeachment probe after what Trump may have said in a phone call with Ukraine’s new leader, according to The Associated Press.

Possible impeachment proceedings and other issues Congress could tackle were given as reasons why a Monday, Jan. 27 election date was chosen to replace Republican Congressman Sean Duffy, whose resignation went into effect Monday evening. The people in the 7th Congressional District need representation, Evers said.

As for the upcoming state legislative session, it could include two items stripped from the Democratic governor’s budget: using federal dollars to expand Medicaid and allowing medical marijuana in the state.

But Republicans have steadfastly remained opposed to Medicaid expansion under the Affordable Care Act. And while Assembly Speaker Robin Vos, R-Rochester, has been open to allowing medical marijuana, Senate Majority Leader Scott Fitzgerald, R-Juneau, is concerned it could lead to legalizing recreational marijuana.

Changing the age to buy tobacco products and e-cigarettes to 21 instead of 18 was also discussed. Evers said as a former smoker and the son of a doctor it’s an issue he’s concerned about. A bipartisan bill proposed by Wisconsin lawmakers is supported by e-cigarette maker Juul. Evers said he’s worried about giving such companies concessions in any legislation.