What Polls Show About the Legislature

Voters have net positive view of Legislature but negative toward Vos, split on Fitzgerald.

By Melanie Conklin, Wisconsin Examiner - Sep 17th, 2019 03:21 pm
Get a daily rundown of the top stories on Urban Milwaukee

The August results were what you might expect from a public that often doesn’t follow state politics. Here is our synopsis of the answers on the August poll, unveiled Sept. 4:

It’s not surprising to see state politicians with low name recognition, that’s common. (In fact more than a fifth of the voters don’t have an opinion about Evers even though he’s won four statewide general elections.)

So to find out more about who is paying attention to state politicians, Wisconsin Examiner asked poll director Charles Franklin for a more detailed drill-down into who knows what about these leaders. Franklin, along with his colleague, Lubar Center for Public Policy Research and Civic Education Research Fellow John Johnson, kindly obliged.

To get a more accurate picture, Johnson combined the results of all three 2019 polls. Franklin notes that results across the three polls have not changed much. (Results about Gov. Tony Evers show more people now have an opinion on him than when he first took office in January.)

Johnson found that Fitzgerald–who is now running for Congress to replace Jim Sensenbrenner–is more well known than Vos with 57% lacking an opinion on Fitzgerald, while 67% don’t know enough about the Speaker to comment. And more Democrats (38%) have an opinion about Vos than Republicans (30%).

“Looking around the state, I notice that Vos and Fitzgerald have very similar levels of unfavorable sentiment in each region,” says Johnson. “It’s just that Fitzgerald has higher favorable ratings nearly everywhere. I think this points to his overall higher name recognition–particularly among Republicans who are inclined to view him favorably if they know something about him.”

Looking at compiled “net favorability ratings” among those who do know the two is more interesting — and a sign of how partisan things have become. (Net favorability is the difference between the percent who view a figure favorably and those who view that person unfavorably. Net ratings avoid confusing the numbers with all those people who lack an opinion, explains Johnson.)

Possibly by virtue of being in the Senate seat and having served in state government for an extra decade, Fitzgerald is better known. The 46% of Republicans who have an opinion on him rate him +32, far higher than Vos’ +20 among GOP voters. Fitzgerald is known to 41% of Democrats and disliked just a tiny bit more than Vos by them with a -29. Fitzgerald also does better among independents with a net score of -1. 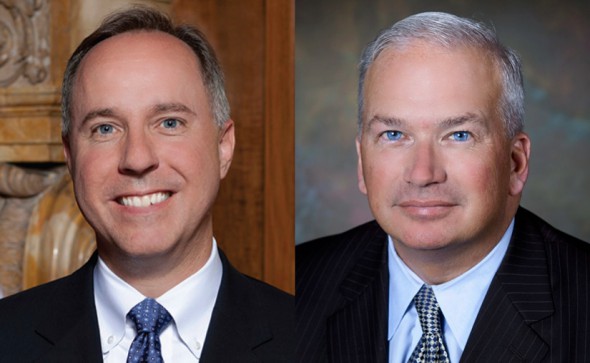 The one number that surprised even veteran pollster Franklin was how many people were positive about the Legislature as a whole and only 13% said they didn’t know enough to comment. Among the rest, the legislature scores +16. It soars to +55 among Republicans and dives to -14 among Democrats. But, notes Johnson, here is where there is a bit less partisanship: “17% of Republicans disapprove of the legislature, and 37% of Democrats approve of it.”

State Sen. Jon Erpenbach (D-West Point) has a theory about that: “If anything, I think what it might say is that people are looking for balance in government.”

Are you paying attention?

A key subgroup of Wisconsinites who were interviewed emerged from this question:

Among Republicans and Independents the trend was different. Those who said they don’t pay much attention mostly gave “don’t know” responses.

One more observation from Johnson tied with party affiliation: “I think it’s worth noting that our recent polling finds Republicans to be slightly more engaged with politics than Democrats. This isn’t exactly surprising, as it fits with the long-term trend of about 3% more Republicans than Democrats saying they follow politics ‘most of the time.’ But it does indicate that statewide Democrats aren’t unusually engaged with politics relative to Republicans at this point.”

Show this fact to anyone who says Wisconsinites are strictly divided GOP red or Dem blue: “Among all registered voters, 19% approve of both Evers and the Legislature; 7% disapprove of both,” says Johnson.

Evers is, logically, much more well known, however he’s still known less than the Legislature as a whole. “Across all three 2019 polls just 21% of Republicans, 16% of Democrats and 25% of independents have lacked an opinion on his job performance. Evers got a net rating of:

Compare that to President Donald Trump’s net rating of:

Where are you from?

A final area of interest on the political figures is approval by region. No shocker here—Vos and Fitzgerald and the legislature as a whole get net unfavorables in Madison and the city of Milwaukee. Also not a surprise—in the Milwaukee suburbs Vos and Fitzgerald get net favorables. Fitzgerald, according to Johnson’s analysis, can also brag about net favorable ratings in the Green Bay/Appleton area. The governor bests them both, however, in favorables statewide.

“Evers’ popularity is quite widespread,” says Johnson. “His job approval is positive in all regions of the state–although it is quite close in the Milwaukee suburbs.”

But he adds this caveat: about a fifth to a quarter of registered voters in every region still don’t offer an opinion about him, even though he’s run statewide for years as superintendent of education.

“The Legislature as a whole is also above water everywhere…except the city of Milwaukee and the Madison region.”

And if these numbers have not scrambled your political nerd cortex, with a tip of the hat to Lubar Center’s John Johnson, you can find more on the tables and numbers here.

One thought on “What Polls Show About the Legislature”