Despite an international collapse in the price of recycled materials, Milwaukeeans continue to place more of it than ever in their blue-topped bins.

The Department of Public Works (DPW) collected 25,451 tons in 2018, up 26 tons from 2017 (that’s a .1 percent increase). But that increase grows when considering the landfill diversion rate, which grew to 25.7 percent in 2018 (up 0.4 percent). The news comes as deliveries from Amazon and other online shopping services are at an all-time high, with the city’s recycling mix following suit. Corrugated cardboard collection climbed to 4,405 tons, a 16.7 percent increase.

But despite the fact that Milwaukeeans are recycling more, the city is still going to receive less for it. The annual recycling report notes that the city avoided $1.1 million in landfill costs and received over $1.3 million for the sale of materials in 2018. That’s a drop from the $1.87 million the city received from material sales in 2017, with the decline due to China’s decision to quit buying large quantities of recycled materials.

Before China’s exit depressed the market, governments across the country could count on a steady stream of revenue from selling everything from milk jugs to old newspapers. Milwaukee, which benefits from its proximity to Wisconsin’s paper mills and other industrial users, must now increase the quality of its materials by better sorting and cleaning them in order to derive the same amount of revenue.

The city has budgeted to receive $1.58 million from the sale of materials in 2019, up from $1.3 million, but that increase will be offset by an additional $457,000 the city will pay to Resource Recovery Systems which operates the joint Milwaukee and Waukesha County recycling facility. The governments renegotiated the agreement with the for-profit operator earlier this year after it reported a $1 million loss in 2018.

DPW reported spending $10.04 million on the recycling program in 2018. That number falls to $5.28 million after accounting for state aid ($2.3 million), material sales and avoided landfill costs. Compared to throwing the same tonnage in the trash, the recycling program produced a net benefit of $1.48 million or $58 per ton to the city in 2018.

Keep Plastic Bags Out of Your Recycling Bin

The city could save on recycling by increasing the quality of materials it collects by reducing the number of contaminants, including plastic bags. The bags, handed out free at convenience and grocery stores, should not be recycled as part of the city’s curbside program as they jam sorting machinery.

“Two or three times when it breaks, they have to harness up and laboriously cut it out [from the screens],” said city sanitation services manager Rick Meyers of the delays at the privately-operated Materials Recovery Facility in the Menomonee Valley. The Common Council’s Public Works Committee reviewed the report at its Wednesday meeting.

“I think a lot of the citizens in my district think they can and think they’re doing the right thing,” said Alderman Michael Murphy about placing bags in the recycling bin. “I think you need to get the word out.”

Alderman Mark Borkowski highlighted the confusion surrounding the issue with a simple question about why Walgreen’s bags are labeled as recyclable, while Pick ‘n Save’s are not.

The bags are recyclable said Meyers, but only through collection programs hosted at the stores that collect only the thin bags. “It’s recyclable, but not in the curbside program,” said Meyers.

“This is something that I probably only got clarity on through the last meeting,” added Ald. Nik Kovac. “So you’re guilty too,” interjected Borkowski. “Not anymore,” responded Kovac.

Two down, only 595,000 people to go. Murphy encouraged the department to provide information the council members could include in their newsletters and to issue press releases informing the public the cost of “wishcycled” plastic bags.

Samantha Longshore, DPW resource recovery program manager, said she continues to gather information from grocery store operators on how their bag recycling programs work and if the city is able to partner with them. Longshore said she’s discovered that the market for the bags is also drying up with a handful of purchasers exiting the market. Committee chair Ald. Robert Bauman and others have pushed for the city to join a program as a way to increase the recycling rate.

The city is restricted from banning or requiring a fee for the bags by state law. Murphy asked if there was any chance that could change in the near future. “I think that there is an understanding that the current makeup of the legislature is not favorable to pushing hard on producer responsbility models,” said Meyers.

Which Milwaukeeans are Recycling? 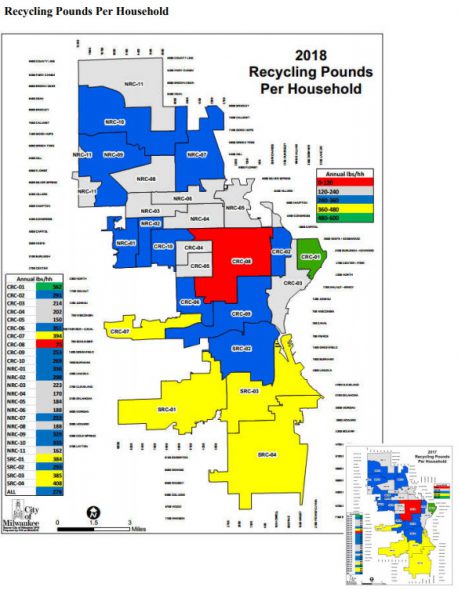 Recycling pounds per household. Image from the Department of Public Works.

A map included with the report highlights which Milwaukee neighborhoods, segmented by pickup districts, are recycling the most. Much of the data correlates roughly with the household income of the covered areas.

One thought on “City Hall: City Recycled More in 2018”