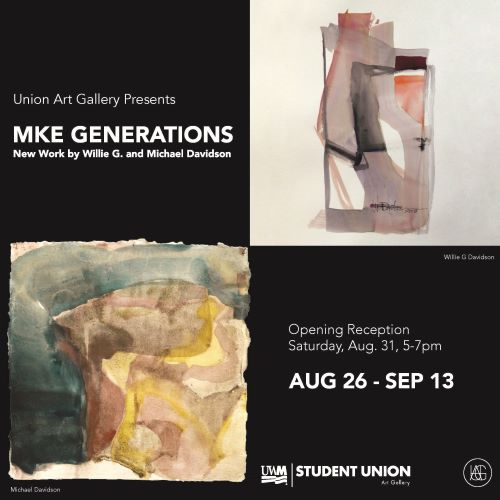 MKE Generations: New Work by Willie G. and Michael Davidson at the UW-Milwaukee Union Art Gallery emanates with a golden light. We get a view into the visual communion of two generations, father and son, through their artwork. To fill a space as large as the Union Gallery with work created since 2018 is a testament to the zeal they have for their work. Their joy for watercolor and mutual admiration for each other emanates from these pieces and this exhibition.

Painted light achieved in watercolor is different than any other mediums. Unlike oil, acrylic, encaustic or any number of opaque painting methods that layer paint on the surface, transparent watercolor literally becomes the surface and interacts with the whiteness of the paper as it stains. When used with a playful and seasoned touch, this medium can create paintings that pulsate with energy and radiate an inner glow. Watercolor is a definitive medium: the mark made when using it stays, for the most part, when dry, even when doing subsequent washes. It is a medium that reveals and exposes the hand of the maker.

Take for example, Michael’s “Coyote”, a painting with a cavernous underwater space. Ghost shapes appear and dissolve as our eye swims through brushstrokes which suggest object, form or atmosphere. When looked at closely, the work remains extremely painterly and we are reminded of its material nature, that it is simply colored water. But when stepping back, forms float and recede in an epic dream space; the painting’s meaning is not ours to know but we are allowed a glimpse. Every area of the surface is considered. My favorite square foot of this entire show is the bottom left corner of this painting. Washes veil a flying shape which is “looking” at the paper’s corner. Soft repeated forms mimic the shape’s gaze and a light blue drip nestles into the paper’s upturned deckled edge.

Another piece I’m drawn to is called “Pegasus (Dirty Circus).” This painting crackles with energy. The ambiguous transparent forms push against each other, some edges dissolve while others sharpen. I feel like I’m watching the painting in the act of making itself, a participant in the completion of the work through concentrated looking. These paintings have been worked on sometimes to such an extent, through washes and scrubbing, that the material nature of the paper seems to transform into soft fabric and becomes a sculptural object in itself.

Where Michael’s work has a spacial and psychological depth, Willie G.’s have the breeze of spontaneity and immediacy of touch. Take, for instance “Spring”, which is painted thinly, probably in one sitting. There is a luminosity in the way the paint pools and overlaps, as hard and soft edges merge and dance on the surface. The brush strokes are sure and structural, providing a framework inside of which the paint flows. Around this abstract painting, the artist has drawn a boarder in black pen which feels like embroidery, stitching this memory into the container of the paper.

Willie G’s lines are not so much drawn as they are driven, we are taken for a ride over the rough surface of the watercolor paper. These lines are evident in almost all his work. They are like homemade maps in their directional meanderings, spontaneous and playful like jumping on a bike and going for a ride on a crisp, autumn morning. Many of the pieces have the feeling of an aerial view as though we are looking at a construction sight or plan. In fact, some of the pieces are titled construction, such as the powerful piece “Construction 6”. Two angular shapes lean against each other and merge at the top, the pigment of one floating into the adjoining form, filling it up like a flattened vessel. Another painting called “Sun” has few lines and pulsates with atmospheric intensity reminiscent of Michael’s work as well as the work of the famed British artist, J.M. W. Turner.

This is the first time Michael and Willie G. have shown together and is a rare glimpse into the lives and work of these dedicated artists. But you’ll need to catch it soon. The show closes on Sept. 13.