By Melanie Conklin, Wisconsin Examiner - Sep 10th, 2019 10:58 am
Get a daily rundown of the top stories on Urban Milwaukee 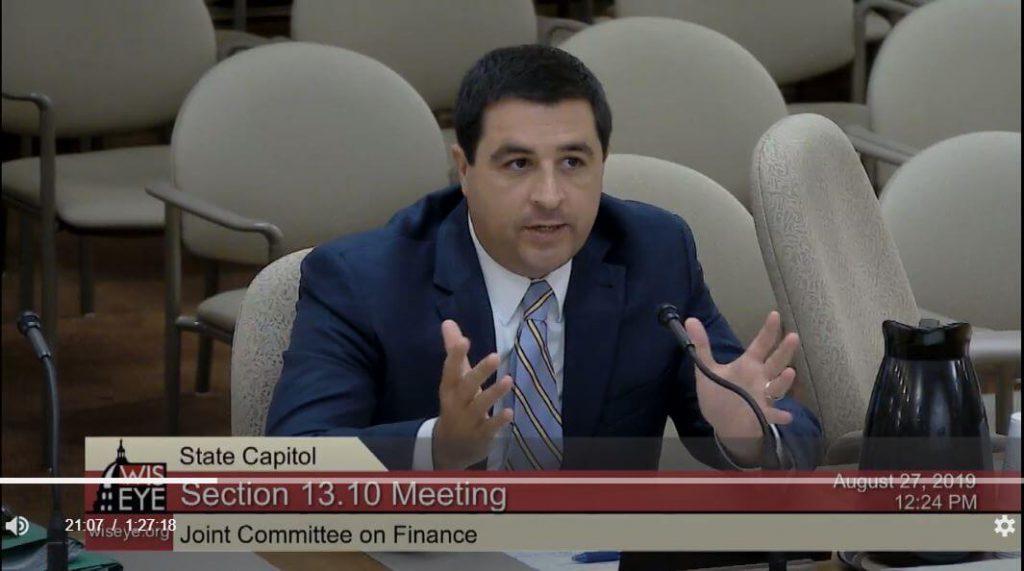 Attorney General Josh Kaul appears before the Joint Finance Committee on 8/27/19 regarding the lame-duck laws, Act 369.

Imagine you  are buying a house and your bank has approved your application to borrow up to $200,000 in a mortgage loan. But you are hoping to get the house for $150,000.

Kaul says such potentially damaging disclosure is analogous to what he is being asked to do by Republicans on the state’s Joint Finance Committee (JFC). Republican lawmakers called last December’s lame-duck session to pass rules and restrictions taking away power from Kaul and Gov. Tony Evers that their Republican predecessors, Brad Schimel and Scott Walker enjoyed. One piece of the resulting Act 369 was a provision that gives the Republican-controlled JFC new powers to manage many of the legal settlements that the Department of Justice (DOJ) is negotiating.

“The legislation was called a power grab because that is what it did,” says Kaul.

The move is unprecedented, says Kaul: “I’m not aware of another comparable situation — not only currently, but in the history of the country.” On background, a national legal expert on judicial, legislative and executive powers agreed that there is no similar model.

The result is that settlements and business at DOJ have been bogged down. Kaul told Republicans if they want to add themselves to this process, they must sign non-disclosure agreements to keep negotiations private. Instead, they hired a private attorney, Andrew Phillips, to represent JFC at $290 an hour, and proposed he sign an agreement for all of them. Kaul, as well as the Legislative Reference Bureau, have stated that Phillips can’t make such an agreement on behalf of the entire committee.

Meanwhile, more than 15 cases and settlements are on hold and Kaul warns that it is the people of Wisconsin who could miss out on settlement money and justice.

“We reached out to put in place procedures to keep litigation confidential,” says Kaul. “The legislature is unwilling to take on the responsibility that is involved with negotiating and settling cases.”

Last Thursday, the four Democratic legislators on the Joint Finance Committee put forward a different solution–legislation that would simply return to the longstanding DOJ practice of negotiating settlements without JFC involvement. The bill by Sens. Jon Erpenbach and LaTonya Johnson and Reps. Evan Goyke and Chris Taylor would repeal the parts of the law that require Kaul to get JFC approval to settle or drop lawsuits, as well as the provision curtailing Kaul’s authority to allocate money from settlements.

Kaul says this legislative solution, reversing portions of Act 369, would be the most effective: “That would resolve all the settlement issues.” (Other aspects of the lame-duck laws are not a part of the proposal.)

There are two problems with this approach — one is getting it done quickly given that a major settlement that must be acted upon immediately could come down at any time. An even bigger problem is that Republicans appear likely to reject it out of hand, however JFC co-chairs had not responded to an inquiry by publication time.

The list of cases that are in limbo could potentially bring in millions of dollars for the state, and Erpenbach points to one major potential example, Purdue Pharma, the maker of OxyContin, is looking to negotiate a settlement with states and local governments for $10 billion or more.

“It’s putting the agenda of the Republicans before the needs of people in Wisconsin,” says Erpenbach.

Relying on the courts

Currently the lame-duck’s Act 369, signed into law by Walker, is being challenged on multiple fronts. The legal challenges will not likely be resolved in time to address any major settlement that is contingent on immediate approval.

Briefs have been filed in a case before the Wisconsin Supreme Court brought by the Service Employees International Union, American Federation of Teachers and others, against legislative Republican leaders Sens. Scott Fitzgerald and Roger Roth and Reps. Robin Vos and Jim Steineke. A key legal argument for the plaintiffs is the separation of powers between co-equal branches of government.

The Department of Justice response brief, citing more than 40 past cases, goes back to the Constitutional Convention and the Federalist Papers, cautioning that the legislative branch may “aggrandize itself at the expense of the other two branches.” It quotes Justice Antonin Scalia on the “separation of powers as the absolutely central guarantee of a just Government.” The brief further notes the attorney general has had these powers since the first state legislature in 1849.

The DOJ attorneys, including Kaul, argue in the brief that “DOJ now cannot resolve enforcement actions or certain cases against state entities without legislative approval. That introduces delay and threats to confidentiality that undermine the executive’s ability to resolve state litigation.”

Asked what impact this impasse will have on Wisconsinites, Kaul answers without pause: “You don’t know when there might be an opportunity to resolve a case. It could be a short window to make a decision that could benefit the state. If you miss out on that opportunity it may be you can’t resolve the case and that means the state is not getting justice.”

Kaul points out that many cases involving the attorney general involve consumer protection, environmental protection and enforcement that may be lost. Many lawsuits come with settlements and, he says, “That means the taxpayers recover less.  It’s getting in the way of us getting justice for Wisconsin.”