A Chicago company could lead the way in constructing affordable apartments. 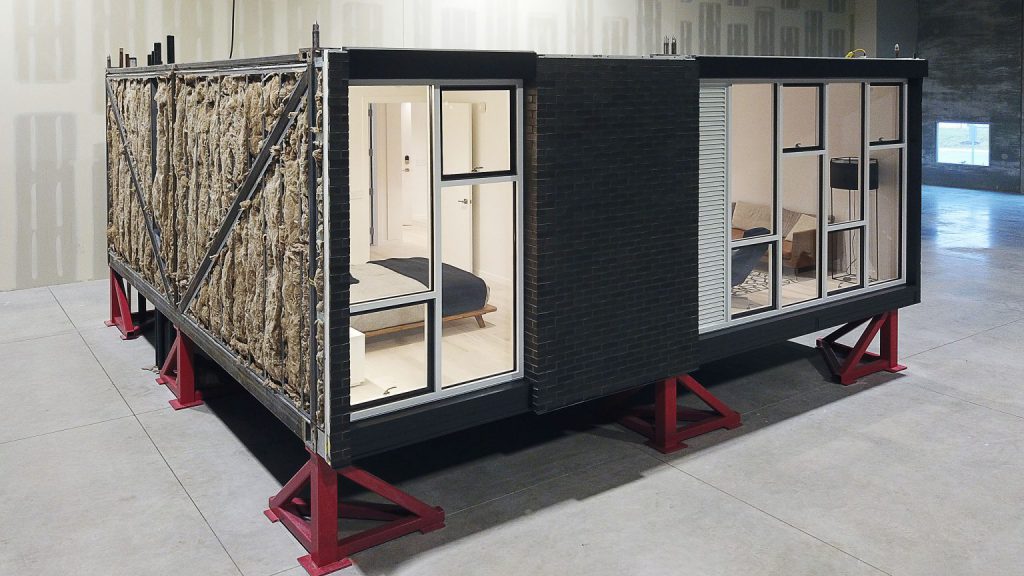 An affordable home module in Skender’s factory. Photo from Skender.com

The key to affordable housing could soon roll off a production line in a Chicago factory.

Skender, an Illinois-based construction company, has begun building modular, multi-family housing in a plant on the Windy City’s southwest side.

The vision is to build and ship finished “modules,” effectively rooms or entire apartments slated for a three-story, three-unit building, in six days.

“We’re completely changing the paradigm here for the construction process, which will drive the price of the home down,” Stacy Scopano, Skender’s chief technology officer, told WBEZ in May.

Labor is one of the biggest drivers of the cost to construct housing, regardless whether the unit is destined to be set-aside as affordable or a high-end luxury unit. The Skender model attempts to save money by shortening the construction timeline, eliminating the need to hire as many subcontractors and reducing the amount of on-site work hours required. It could also deliver more cost certainty, an issue that has plagued Milwaukee affordable housing projects.

The idea has its roots partially in a century-old idea of another Chicago company, Montgomery Ward. The mail-order catalog company started offering home kits in 1919, an attempt to provide quality, affordable housing through mass production. Unlike the modern idea, on-site assembly was required.

Factory-built single-family homes are already commonplace in the United States, with mobile homes being the leading example. According to the U.S. Census Bureau, 17.7 million Americans live in a factory-built home. But urban areas like Milwaukee and Chicago, dotted by vacant lots in otherwise walkable neighborhoods, can’t rely on mobile homes and single-family residences to provide a sufficient amount of affordable, urban housing.

Skender’s model, which has its first big customer in Chicago developer Sterling Bay, relies on a steel-frame to construct a traditional Chicago-style building, the three flat. As common as the duplex is to Milwaukee, three flats are effectively three, one-story apartments stacked one atop another. To receive a zoning variance in Chicago, Sterling Bay is required by the city to build hundreds of affordable units and it can then construct a substantial amount of market-rate housing. Alderman Robert Bauman proposed a similar ordinance in Milwaukee, but state law effectively killed the proposal.

Chicago isn’t the only city experimenting with modular affordable housing. Blokable, Katerra, and OneBuild are all testing the idea in the Pacific Northwest. Other companies are working on the idea on the East Coast.

Milwaukee is attempting to supply affordable housing through a number of different methods.

The city has begun subsidizing projects receiving federal and state low-income housing tax credits with tax-incremental financing. A variety of city programs also support the rehabilitation of existing homes, including the Housing Trust Fund. City officials are also supporting a proposal to construct tiny homes for homeless military veterans. Habitat for Humanity is building 100 homes in the Midtown neighborhood. The biggest proposal is for an affiliate of the Housing Authority of the City of Milwaukee to develop a luxury housing high rise with affordable housing interspersed.

The proposals come as part of Mayor Tom Barrett‘s pledge to create or preserve 10,000 affordable homes in 10 years. But the city is going to need all the help it can get to meet that goal.

Should the factory-made housing idea take off in Chicago, don’t be surprised if you’re passed while driving on Interstate 94 by an apartment building convoy.