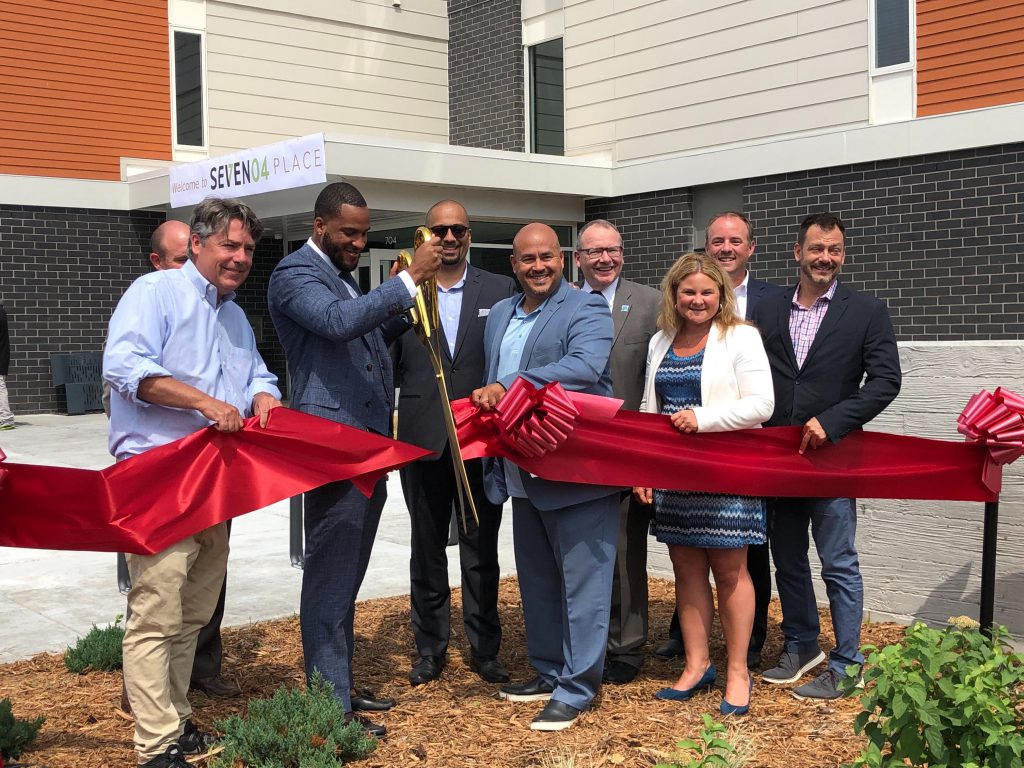 Developer Brandon Rule was joined friends, family and a long list of project partners as he celebrated the opening of his first project, SEVEN04 Place, on Friday morning.

Rule started planning the four-story, 60-unit affordable apartment building in 2015. “There’s been a lot of ups, a lot of downs, but it’s all been meaningful,” said Rule of the project at 704 W. National Ave.

The location choice was deliberate for the developer. He grew up nearby on S. 26th St. and W. National Ave., taking the bus to school every day right past the site.

The first-time developer was joined by a number of other speakers, reflecting the complex web of partners required to bring the development to life, at a ribbon-cutting ceremony.

Rule’s firm, Rule Enterprises, partnered with co-developer Impact Seven on the $12.2 million project. The Wisconsin Housing and Economic Development Authority, now led by Milwaukee resident Joaquin Altoro, contributed $6.4 million to the project via affordable housing tax credits. As a result, 51 of the 60 one-, two- and three-bedroom apartments, are reserved with reduced rent for those making less than the area’s median income. Fourteen units are set aside for making 30 percent or less of the area median income, 22 for 50 percent or less, 13 for 60 percent or less and two for 80 percent or less.

“I love that it was an African-American developer that brought the project to the south side,” said Altoro. “I think this is proof positive in Brandon and people like Brandon that they will invest in their communities.” Like Rule, Altoro can trace his family history to the area. His family’s Milwaukee ties go back to 1918 and a home they lived in only three blocks from Rule’s project. WHEDA’s Milwaukee office is now located across W. National Ave. in the Mercantile Lofts, keeping Altoro close to his roots when he works in Milwaukee.

Rule also drew praise from UnitedHealthcare Community Plan of Wisconsin CEO Ellen Sexton. UnitedHealthcare purchased the tax credits from Rule, providing the needed equity to finance the development. “Navigating healthcare today is so much more than just medical,” said Sexton of why a health insurer would invest in housing. Echoing a comment made by Altoro, she said the investment in affordable, quality housing would provide downstream benefits in terms of health and well-being. Since 2011, the nationwide provider has invested more than $400 million in affordable housing developments.

Lamenting the concentration of poverty in the city compared to the suburbs, Marcoux praised Rule’s commitment to empowering Milwaukee residents. “We are not going to solve the suburban-city divide in this room today, but what we are solving is there is a new crop of developers,” said the commissioner. “Our development community has to start looking more like Brandon Rule.” Rule, Altoro and Perez are all graduates of the Associates in Commercial Real Estate (ACRE) program designed to train minorities for careers in real estate.

Perez said Rule’s work will help prevent displacement from all of the market-rate development taking place in the area, something that he says thankfully hasn’t happened so far. “When you look at all the new housing in Walker’s Point, not one person was displaced.”

The alderman said the mix of housing options, income levels and ethnic backgrounds in his district makes it a good representation of the entire city. “I often say, if you want to see what Milwaukee looks like, come to my district.” The 12th district runs from the Harbor District west to S. 20th St., and north to south from the Menomonee River to the Kinnickinnic River.

But the 1.75-acre site, a redeveloped brownfield, is itself a microcosm of Milwaukee, reflecting the always evolving city. It was most recently used by grocer El Rey as a distribution center, but a collection of buildings formerly on the site had a lengthy list of prior uses including as dry cleaner. “A significant chunk of our financing is actually going into the dirt,” former Impact Seven vice president Kristine Giornalista told a city committee in November 2017. One of the buildings was salvaged and now serves as an amenity space for residents.

There weren’t a line of residents waiting to move in as soon as the ribbon was cut. The project received a temporary occupancy permit in November 2018. Rather than touring empty apartments, ribbon cutting attendees were able to tour a handful of occupied apartments after the ceremony. 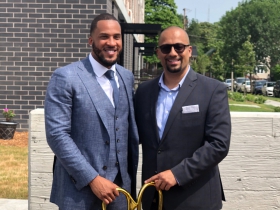 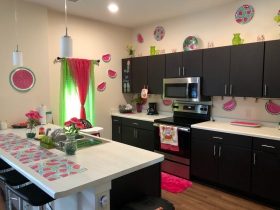 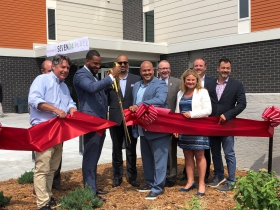 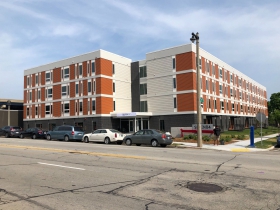 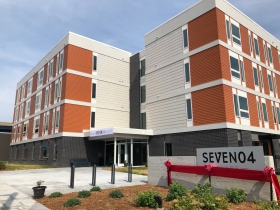 This isn’t a one-and-done proposition for Rule. The developer is already planning a project in Madison as well as another affordable housing development just down the street at 1331 W. National Ave. He has already secured low-income housing tax credits from WHEDA for the latter project.

He’s also looking at other development projects in the city, as well a new tool to raise equity to finance the projects. “My next big real estate endeavor is putting together a crowdfunding platform,” said Rule.

The project partners list doesn’t stop at Rule Enterprises and Impact Seven. Catalyst Construction built the building. Arc-Int Architecture served as the architect of record on the project.

But the list gets longer. At the project’s groundbreaking in February 2018, Milwaukee Department of City Development representative Maria Prioletta characterized the project’s partners as “lasagna” given all the layers.

Neighborworks provided a $175,000 grant and the Federal Home Loan Bank of Chicago provided a $750,000 grant. The development team is also deferring a portion of its development fee. The project was supported by initial investments by LISC Milwaukee and Forward Community Investments.

UnitedHealthcare purchased the credits via a partnership with Cinnaire and Minnesota Equity Fund.

A number of subcontractors and city residents worked to build the development. Terms of the TIF district required the development team to have 40 percent of the project “worker hours” completed by unemployed or under-employed city-certified participants in the Residents Preference Program. Qualifying small business enterprises are required to complete 25 percent of the project’s costs.