The Man Who Biked to Every Bublr Station

87 local stations in four different cities, one dauntless rider biked to every one of them.

Bublr Bikes hit the streets of Milwaukee in 2014. Photo from Bublr Bikes.

Some people try to visit every major league baseball stadium. Others try to visit all 50 states. Jeff Sponcia wanted to bike to every Bublr Bikes docking station.

And he pulled it off, in exactly eight hours on a July weekend night.

Sponcia, manager of planning at Milwaukee County Transit System (MCTS), visited all 87 Bublr Bikes stations spread across Milwaukee, Shorewood, West Allis and Wauwatosa. He undertook the trip for fun, but expects it to have a professional benefit. The MCTS on-bus information system announces nearby Bublr Bikes stations to encourage connectivity and the transit system has a fare-card partnership with the non-profit.

“I’ve used Bublr for short trips and recreational rides, so it’s only natural I was curious as to the exact location of all their stations and how their proximity to MCTS bus stops can help our riders complete parts of their trip,” said Sponcia in an interview. “Finally, I’m the type of person who wants to challenge himself to accomplish things that I’ve never done and don’t know if I can actually do. Once I started on this trek and kept making progress, ticking off station after station, there was no way I would quit until I achieved this goal.”

Sponcia undertook his journey on a Sunday evening, choosing not to start until after 6 p.m., 6:19 p.m. to be exact. “The advantage was, there were virtually no cars on the streets of Milwaukee after about 9:30 p.m. on that night where I happened to be, ” said the transit planner. “I felt like I owned the roads. Quite a rare feeling when biking in Milwaukee.” He finished, pulling back into the dock at Miller Park where he started, at 2:19 a.m.

His circular trip involved using his membership to quickly check a bike out at every station and bike to another station. In two spots where the lack of station proximity makes biking time prohibitive he hopped on a bus to close a gap (two buses to get from N. 17th St. and W. Brown St. to N. 55th St. and W. North Ave. in Wauwatosa and from Walker’s Point to the north end of Downtown after exhausting the stations). He also opted to walk up the hill from Bradford Beach to E. North Ave. instead of attempting to ride a bike.

Owing to his transit planning day job, Sponcia even considered what side of the street stations were on in planning his journey. “Almost all the Bublr stations on Oakland Avenue are on the southbound side of the street—fortunately, I factored that in as I planned my route so that part was a breeze,” he told Urban Milwaukee.

Along the way he had lots of chance encounters, including helping a tourist check out a bike, helping load a canoe onto a vehicle in Schlitz Park and being accused of being an undercover cop.

“It was quite memorable, exhausting and educational,” said Sponcia. The transit planner calculated he biked 43 miles. 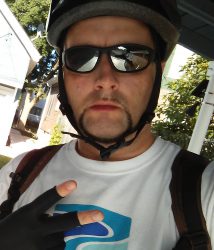 Jeff Sponcia on his bike.

He didn’t subject any of his friends to his chase. “I did this solo as I wanted to go at my own pace.” That included a couple of brief breaks along the way, including a pit stop at Whole Foods on the East Side, Hart Park in Wauwatosa and laying on a bench “barely able to move” at the West Allis Farmers Market. It also took almost a half-hour to get from Wauwatosa to West Allis.

What does he hope people take from his adventure? “Bottom line, there are now so many ways to get around Milwaukee without an automobile, but many residents (and visitors) are either unaware of, don’t have access to or are not able to use one of these modes,” said Sponcia. “In a time when state funding is sorely lacking, yet neighborhoods and surrounding suburbs are expanding and offering more shopping, restaurants, jobs and housing, our elected officials should absolutely be prioritizing road dieting, bicycle/scooter and pedestrian infrastructure expansion and massive increases to transit funding.”

“I encourage all Wisconsin elected officials to come to Milwaukee, try out MCTS, the streetcar, Bublr, Lime e-scooters and walking throughout our great city and county,” said Sponcia via email. “Try to get from one place to another without using a car.  There’s no other way to gain perspective on the transportation needs of the people of Milwaukee (the economic engine of the state) unless they do it for themselves.”

So now that the challenge has been raised, how fast can you hit up every station? It’s going to get progressively more difficult; just since Sponcia completed his ride there is now an additional station. And Bublr plans to add 26 stations starting next year.

2 thoughts on “Transportation: The Man Who Biked to Every Bublr Station”