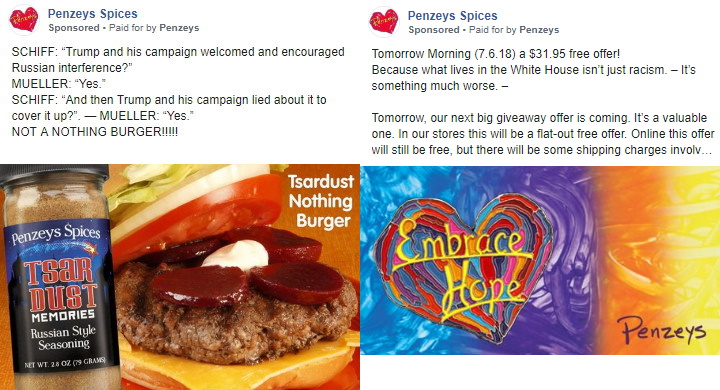 Can spices be political?

After all, they come from all over globe and inevitably intermix the colors, smells and tastes of every culture in the world.

Bill Penzey, CEO of the Wauwatosa-based Penzeys Spices, America’s largest independent spice retailer, clearly sees his product as a way to embrace — liberally — a multicultural world. “He introduced Tsardust Memories, a ‘ripped-from-the-headlines’ Russian spice blend (including cinnamon, nutmeg, and marjoram), and put together a spice rainbow (red cayenne, orange curry powder, etc.) to celebrate the anniversary of the Supreme Court’s decision on marriage equality,” a 2018 story in the New Yorker giddily recounted. “On July 6, 2017, two years after Trump kicked off his Presidential campaign by calling Mexican immigrants to the United States ‘a tremendous infectious disease,’ Penzey announced that the company would be doing a no-strings-attached giveaway of Mexican vanilla extract, writing, ‘Today, on this anniversary, it seems a good day to apologize to the people of Mexico and Latin America.’”

Penzey, whose parents opened The Spice House in Wauwatosa in 1957, created his own mail-order catalog company in the early 1980s, and built it into a national operation, with 70 retail outlets in 29 states and a busy online shopping component. His sister Patty Erd now runs the decidedly non-political Spice House, located for many years in downtown Milwaukee.

Bill “wasn’t the first C.E.O. to speak out against Trump or to use his position to advocate for progressive values,” the New Yorker notes. “But he was quite possibly the first to publicly call Trump’s election an ‘embrace of racism,’ and he was definitely the first to do so while hawking a free bottle of Quebec Seasonings with any five-dollar purchase.”

That left Penzeys behind about 25 other advertisers on Facebook during this period. The top spender by far was the reelection campaign of Donald Trump, which spent $12.5 million. But “the majority of top spenders were advocating for liberal causes,” the report found, with  “political advertising… heavily focused on early primary or swing states.”

Besides being the top spender, “Trump was the only major political advertiser to focus less than 10% of spend(ing) on individuals under 25 years old,” Open Secrets found.

The analysis was made possible by a change in policy by Facebook: “As a result of Russia purchasing ad content in the 2016 presidential elections and increased scrutiny about political advertising on the platform, Facebook changed its policy in 2018 and began making data on political advertising publicly available,” the report notes.

And Facebook is raking in tons of cash, some $616 million of paid advertising for social causes, elections, or politics in the 14-month period analyzed by Open Secrets.

Most of the spending was by political groups, but there were a couple companies that spent more than Penzeys: Exxon Mobil spent heavily on messages about energy and energy policy, and Stella Artois spent millions on ads related to water conservation.

In that respect the beer maker may be following the example of Penzeys, which has found political messaging can help the company’s bottom line. In the two weeks following his post-election e-mail blasting Trump, there was a “right wing firestorm” Penzey noted, including then Sheriff David Clarke calling the spice retailer a “typical hate-filled white elitist lefty.” All this condemnation “cost the company three per cent of its customers—but… online sales rose nearly sixty per cent in the same period, and gift-box sales increased by more than double that,” New Yorker reported.

Meanwhile, the Penzey name is getting spread far and wide, often by complaining conservatives. My favorite is this post declaring that “Bill Penzey’s Spices Ain’t Nices.”

4 thoughts on “Back in the News: Penzeys Uses Facebook to Attack Trump”