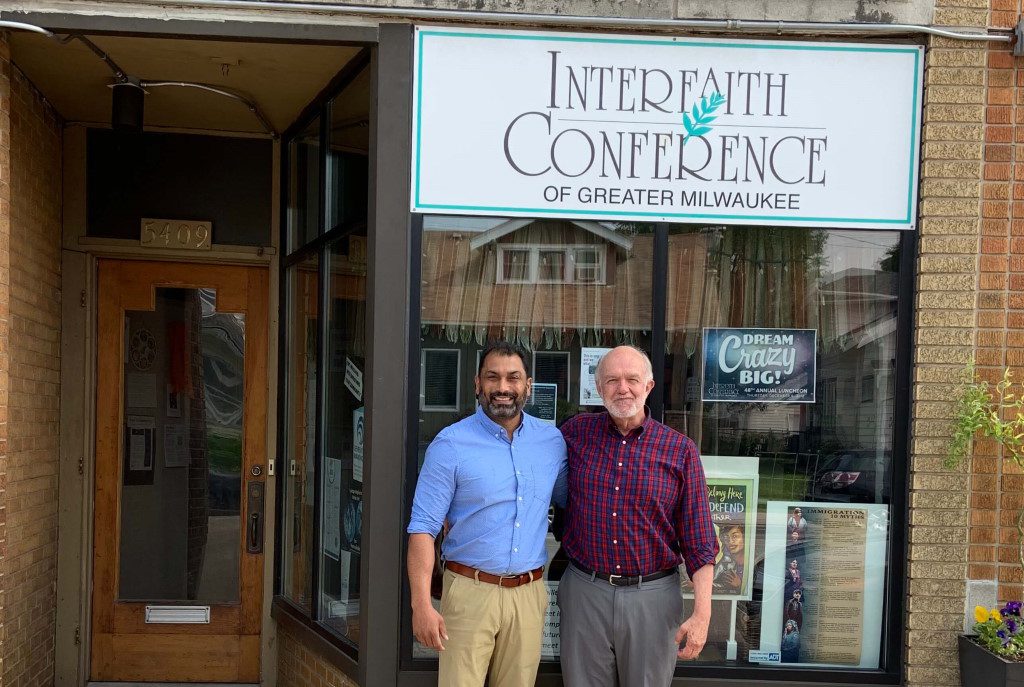 Pardeep Kaleka, left, the new executive director for the Interfaith Conference of Greater Milwaukee, with his predecessor, Tom Heinen. Photo courtesy of the Wisconsin Examiner.

Pardeep Kaleka knows what it’s like to lose loved ones to violent extremism. The executive director of the Interfaith Conference of Greater Milwaukee, who lost his father in the 2012 Sikh temple mass shooting in Oak Creek, has also developed an understanding that mass shootings committed in the name of white supremacy, like the one last weekend that killed 22 people in El Paso, Texas, are a form of terrorism.

But he disagrees with federal prosecutors who announced they would seek the death penalty for the suspect in the El Paso mass shooting.

“I have never really agreed with the death penalty,” Kaleka said in an interview this week. “I feel like it’s archaic. It doesn’t deter as much as people think it does.”

His personal tragedy has done nothing to change his mind.

“What kind of culture do you want to create going forward?” Kaleka asked rhetorically. “I wouldn’t have wanted the death penalty” for the temple attacker.

The cost of execution, which typically includes years of delays as people convicted of capital crimes exercise their right to appeal, is one pragmatic reason for his opposition. So is the realization that people who commit such acts of terrorism “often have that martyrdom syndrome as well,” Kaleka said.

Of the assailant who invaded the temple on Aug. 5, 2012, he added, “I wouldn’t have wanted him to die as a martyr for other people to sympathize. Him taking his own life that’s one thing. If he was on death row I think his voice would be amplified.”

As an interfaith leader, Kaleka knows that many people of faith share his dislike of execution, but he said he wasn’t speaking officially for the conference, just about his own experience.

“But I do also want to respect, maybe someone who has lost a loved one through a hate attack might not feel the same way,” he added.

The question of the death penalty for the attacker who killed his father is ultimately an abstract one, he acknowledged — both because the shooter killed himself at the scene, and because even if the man had not, Wisconsin has no death penalty.

“One of the great things about Wisconsin is that we don’t have that,” Kaleka said. “We don’t have to make those decisions. and somebody doesn’t have to live with the moral, spiritual loss that happens when you take somebody’s life.

“As guilty as that person might be, there has to be a crucial component of being able to redeem oneself.”