Variety Is the Spice of This Exhibit

Show presents six artists of very different cultural backgrounds who all work in the same building. 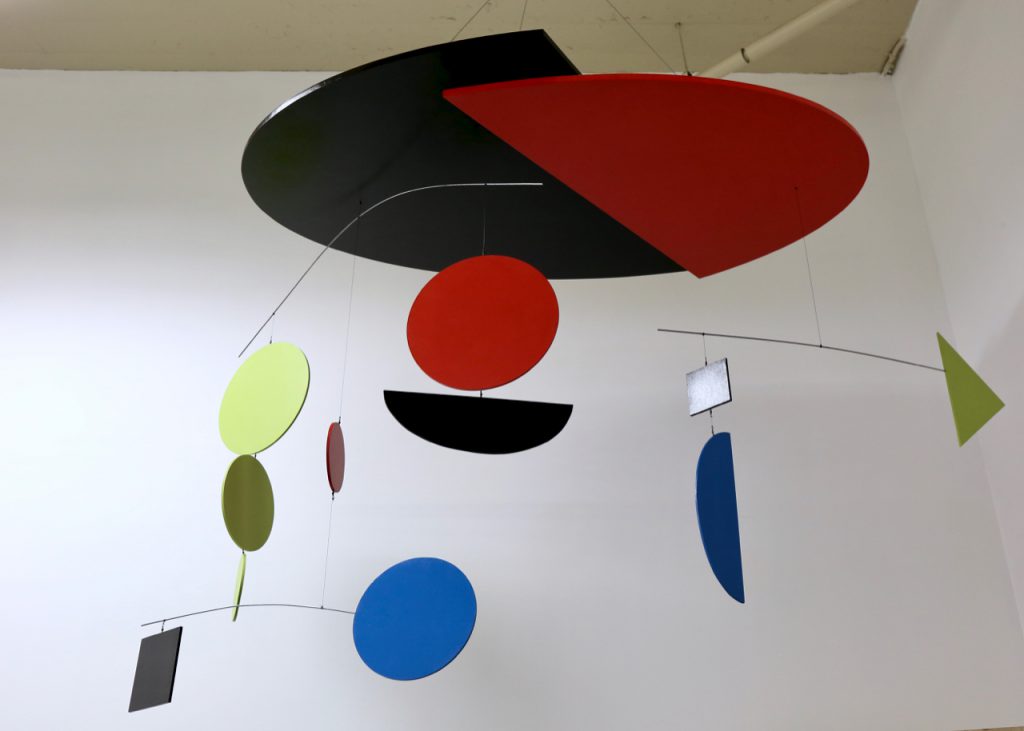 The Frank Juarez Gallery’s latest exhibit showcases the work of six Milwaukee artists of different cultural backgrounds, working with a variety of media, including canvas, thread, graphite, acrylic, wood, and even spice containers. Memory, identity, and today’s social climate are several themes explored within the exhibit.

SPARK is curated by Barbara O’Brien, who moved to Milwaukee in 2018 after serving as the Executive Director and Director of Exhibitions and Collections for the Kemper Museum of Art in Kansas City, Missouri. According to the gallery’s press release, selections for the exhibit “were based on studio visits where each artist was invited to share work with O’Brien that was on the ‘leading edge’ of their practice.” For O’Brien, curating SPARK was “a marvelous welcome to Milwaukee.”

Ghanbarzadeh’s “If I could write it differently” features dried acrylic paint sewn on a large duck canvas (81 x 60 x 18 inches). Ghanbarzadeh, a native of Tehran, Iran, has employed shapes like the written Farsi language on the canvas. In her artist’s statement, Ghanbarzadeh explains her reasons for choosing to sew the paint on canvas, rather than drawing or painting the backdrop. “The entire work has to be stretched out on the floor and walked on to make any changes. I use this as a metaphor and ask these questions: If I could go back in time, how would I change a page or two from my story? Would I want to change it at all knowing that all the past experiences have made me the person I am today?”

“Memory of Spices” features Raja’s plaster casts of canisters of cooking spices such as turmeric, star anise, black peppercorn, cardamom and red chili pepper — all spices once used in her grandmother’s kitchen long ago. Although Raja, who was born in India, acknowledges that the past is long gone, it lives on through her casts. The casts are painted white but have what appears to be rust or dirt on the exteriors, recalling objects found at an archaeological dig, or possibly lining the shelf of an antique store. According to Raja, her casts tell “a mysterious story of their own, one of compression and containment of memories, of visceral experiences of smell, taste and sound of a kitchen far different from my own now; of a culinary tradition that is fast becoming only a memory.”

Exemplifying the centuries-old East Indian art of henna, Roongta’s “Out of the Ashes” is composed of drawings (graphite and ink of paper) influenced by her experiences working as a lawyer and advocate for victims of domestic violence. “Listening to and capturing these stories left me in awe of the human experience and our capacity to endure when we are able to share our stories and be heard,” Roongta writes in her artist’s statement. In lieu of the traditional floral patterns typically found in henna art, Roongta uses lines to signify the passage of time and text to further illustrate “the beauty of the human spirit.”

In her works, “And so the histories were told beneath” and “Halophile look below to a new heaven,” Jorgenson employs a technique known as encaustic painting, which dates to ancient Egypt. Jorgenson incorporates hot beeswax, damar resin, and pigment to create her colorful, abstracted pieces, influenced by nature and ancient civilizations. “This work is an exploration of our earth as shaped by humankind,” Jorgenson writes.

Thompson-Wallace, a British artist and co-owner of Saxon Wallace Gallery, a gallery within Material Studios, depicts strong women who have triumphed over difficult circumstances in his acrylic paintings. In “Viking Moon: Jaquelyn James,” for example, his subject is posed in a window box, her hands pressed against the edges, wearing unmatched shoes. Although her gaze is confident, her body language could signify some inner turmoil. Through his painting titles, Thompson-Wallace likens his subjects to brave warriors.

Anderson’s paint, wood and steel mobile sculpture, “Heavenly Bodies,” features celestial shapes—half-moons, suns, and planets (or possibly satellites) in chartreuse, royal blue, black and green. The shapes complement each other well, and the sculpture hangs with a tranquil, harmonious flow. “My process is fluid, guided by intuition,” Anderson writes. “The work is both playful and calming. A perfect balance of life itself.” 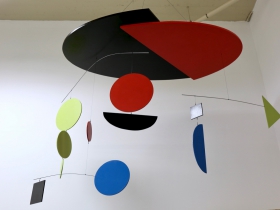 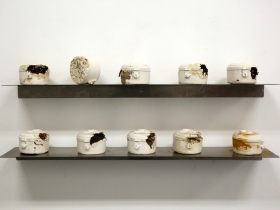 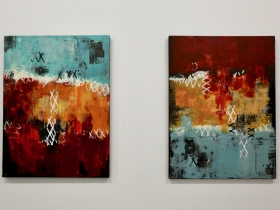 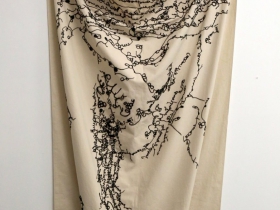