Elwood’s Is Downtown and Very Urbane 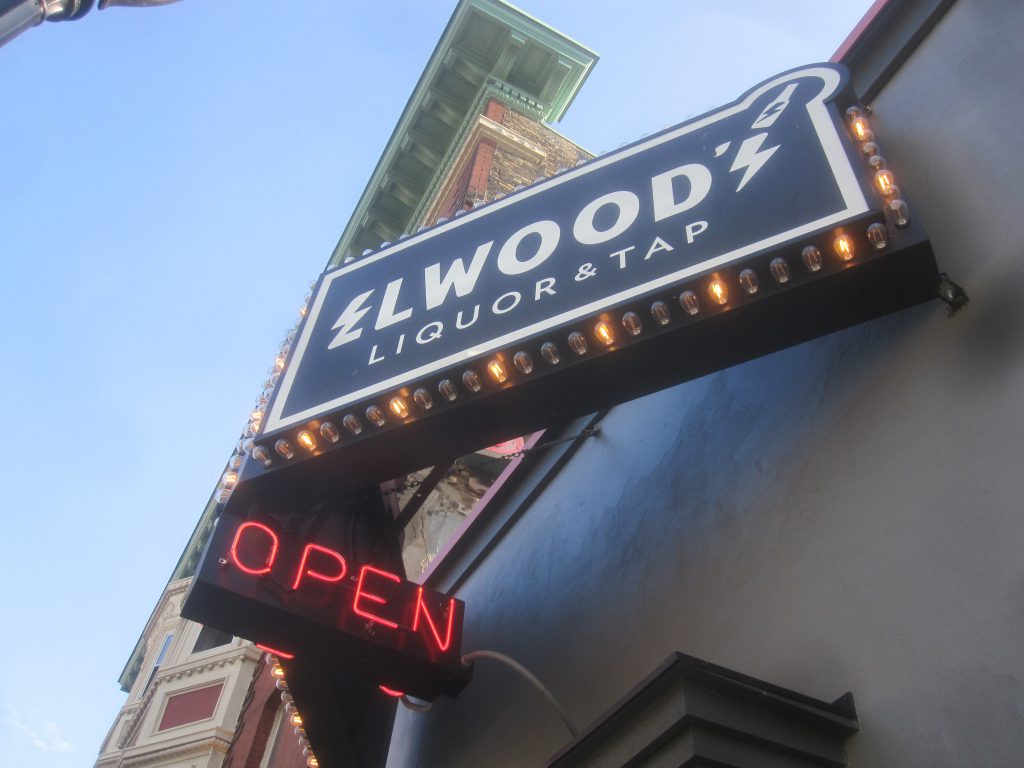 This one-story, 2,240-square-foot building was constructed in 1908 at a time when Water Street north of City Hall was, like much of the city, an industrialized zone. In its early years the structure served as a commercial laundry for washing the clothing and uniforms of those who worked in the nearby breweries, tanneries, machine shops, sausage factories, coal yards and bordellos.

In 1916 it became National Belting & Salvage, which dealt in new and used leather and canvas. It became a tavern in 1936. In 1960 it was the Sheridan Bar, equipped with a Blatz sign in the front, in full sight of the Blatz Brewery across the street. In 1983 it began a long run as Rosie’s Waterworks (later Rosie’s on Water). Rosie’s closed in 2018, and under new ownership, the building opened this month as Elwood’s Liquor & Tap.

Decked Out for Business

You don’t even have to go inside to see the biggest change here, and it is one that strikes to the heart of New Urbanism: the adjacent surface parking lot to the north of the building has been replaced by a raised wooden deck, furnished with new tables and seating. Human beings are displacing automobiles in Downtown! Is this progress, or what?  The deck may be accessed from the street via a gate which is usually locked. However the main entrance is through a newly constructed garage door cut into the north side of the building. Where once a mural reading “Rosie’s” was, is now a mural reading “I–ie’s,” now that the door has been cut through. It provides a new take on the category of “Ghost Signs,” and may become a talking point or a matter of mystery as the years roll by if the wall is not painted over.

The loss of the parking lot is the building’s gain, as well as the street’s, so count this new outdoor drinking spot as a big plus.

The back bar is an Art Deco Brunswick beauty, and it most likely dates to the tavern’s earlier years, perhaps immediately postwar. The honey-colored, wood-veneered bar is flanked by ribbed glass columns that glow red from within, setting the theme for the tavern’s accent color, which is most strikingly deployed in the path to the rest rooms, where both the hall walls and the lighting are red. (Note the very old illuminated directional sign hanging above.) To the left of the bar, which is on the south wall of the building, is a seating nook overlooking busy Water Street. The walls here are of a stone (or stone-like) masonry design, left over from an earlier incarnation. You could squeeze maybe a half-dozen drinkers into this spot — more if you sit them on your lap. 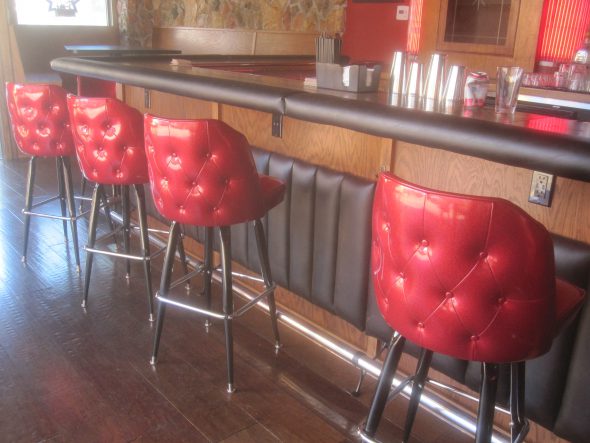 New padded, backed, swiveling barstools are in place, colored red and black. Black vertical cushions on the bar protect your knees, and a shiny rail provides a place for your feet. The wooden floor is also shiny and new. The walls are bereft of decor for the most part. This is a welcome change from the previous clutter. A row of red diamonds glow on the north wall between the garage door and the windows; there a raised bench runs the length of the wall, as it did in the past.

At the west end of the room (for this bar has but one room), a grid of 42 suspended lights illuminate the space, as does a window overlooking your friends out on the deck. While they content themselves with tossing bean bags, you and another can match your skills at the two electronic dart boards there. The pool table that once crowded the space is now no more. To the right of the dart boards is a pass-through window leading to the kitchen of the place. For now, the kitchen is dormant, as it was during the last years of Rosie’s reign.

The new management has clearly invested a good amount of money on the building, including its purchase last year for $800,000. The move toward simplifying the interior gives the place an austere character that stops just a few notes away from sterility, and includes enough old elements to provide contrast and context. A good example is the old refrigerator, now serving as an auxiliary beer tap. The owner also made much needed changes to the front stoop, which had eroded due to our harsh climate and an over-application of salt throughout many winters. This building, now 111 years old, sets the standard on how a vintage tavern that had become somewhat worn might be cleaned up and repurposed quite attractively and efficiently. The tavern opens at 4 p.m., and is closed Mondays.

Now With Many Beers

Rosie’s was an outlier in that it heavily promoted Budweiser, whereas most Milwaukee taverns leaned toward products from the local Miller Brewery. Today it carries a score of tap beers, (including Miller Lite, but not Budweiser.) Fans of AB InBev products must console themselves with cans of Busch Light. The tavern is worth a visit from those interested in sampling unusual beers from smaller breweries, as well as such local standbys as Lakefront Riverwest Stein Beer. In a nod to history, you can also order a Blatz, although the brewery has long since been turned into condos.

Gone are the numerous liquor and beer signs that once littered the walls, although a few souvenirs of the past remain, like a photo of the old Sheridan Tap, and a mugshot of Charles Barkley. Barkley’s evening at Rosie’s has become a part of Milwaukee’s tavern legend.

Charles Barkley had a memorable night at Rosie’s in 1991, when he broke the nose of a man outside the bar around closing time as Barkley left with a female companion. Barkley spent the night in jail, paid $500 bail and flew home to Philadelphia where his wife picked him up at the airport for a very long ride home.

The 2016 Rosie’s Bar Exam can be found here. It includes a history of the building and other information. 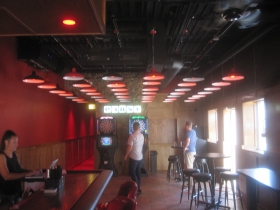 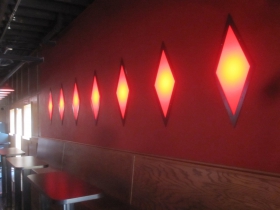 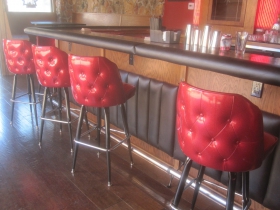 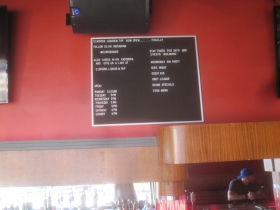 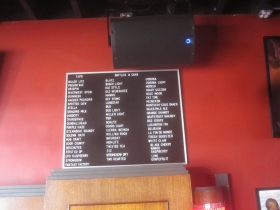 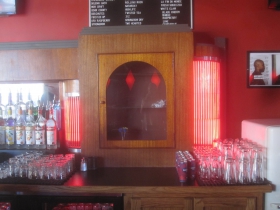 One thought on “Bar Exam: Elwood’s Is Downtown and Very Urbane”