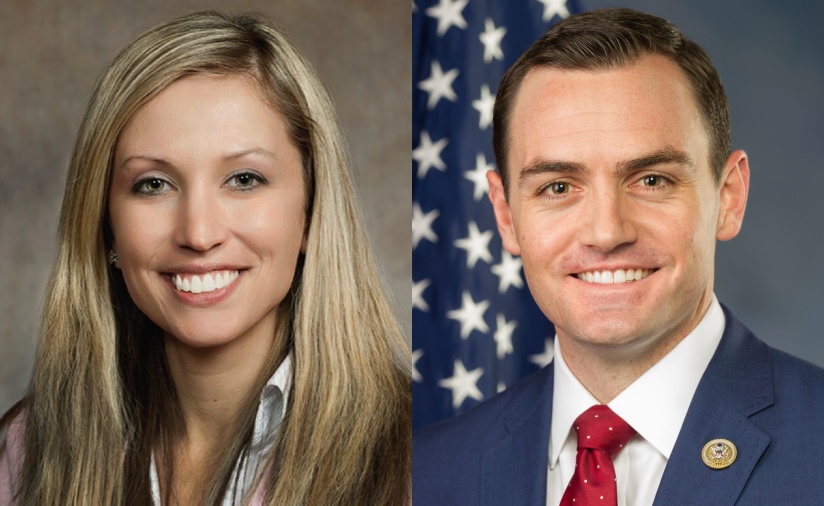 One day state Rep. Amanda Stuck (D-Appleton) heard from a constituent of hers and 8th District Republican Congressman Mike Gallagher about the voter’s family. “He was worried about his wife’s cancer and what’s going on with the Affordable Care Act,” Stuck says. “And he said he heard back from me, but not from Mike Gallagher. I think at the very least the congressman should call this man and talk to him.”

That did it for Stuck. She decided to run against Gallagher, which means she will lose her job in the state Assembly to run a race where the odds and the gerrymandered district are stacked against her. “It’s a big decision,” the Democrat concedes. “But it’s about what people in the district need and fighting to give them a voice in Washington.”

Stuck will be running against a man with a golden resume who is seen as a rising star of the Republican Party. Little more than one year after taking office the novice politician was getting hailed as a kind of second Paul Ryan by Republicans: a good looking, silver-tongued “policy wonk” who could some day run for higher office.

Actually, he had far more impressive intellectual credentials than Ryan’s bachelor’s degree from Miami of Ohio. Gallagher graduated from Princeton, then got a masters degrees from National Intelligence University and a masters and Ph.D from Georgetown University. He also served seven years in the Marines and was national security advisor for Scott Walker during the latter’s disastrous run for president.

The story by McClatchey also hailed Gallagher as a “maverick” who is willing to differ with and even criticize President Donald Trump. He has been praised for that by the likes of Bill Kristol and Charlie Sykes, two of the most well-known anti-trump Republicans (though their numbers are not large).

Stuck questions this description of Gallagher: “That’s one of the frustrating things about politics is that someone can create an image that just isn’t true. A lot of it is him talking about how moderate he is, when it’s not not how he’s voted. He’s voted with Trump 97 percent of the time.”

Govtrack.us, which tracks voting by Congress, ranks Gallagher as the 114th most conservative member of the House of Representatives, which is slightly less conservative than his fellow Wisconsin congressman Jim Sensenbrenner (ranked 98th) and considerably more right wing than Sean Duffy (154th) and now-retired Rep. Paul Ryan (250th).

All of these numbers surprised me, as Gallagher has been portrayed in the media as someone willing to criticize Trump. At times he has. When Trump fired FBI director James Comey, Gallagher tweeted this: “Like many Americans, I have serious concerns and unanswered questions about the timing of Director Comey’s dismissal.”

Gallagher has also defended the investigation of Russian interference with America’s elections, saying: “Russia is no friend to the United States and we must continue to pursue the truth in these investigations wherever it may lead.”

But these are rare exceptions to a Congressman who doesn’t often criticize Trump. The Journal Sentinel recently did a quite misleading story describing Gallagher as the “loudest Republican voice…from Trump country” criticizing the “send her back” chant at a Trump rally, where his supporters called for American congresswoman and longtime U.S. citizen Ilhan Omar to return to her country of origin, as the President had urged.

In fact, Gallagher hadn’t offered a word of criticism of Trump. As the story disclosed later, after the dramatic build-up about Gallagher’s allegedly exceptional stand, “Gallagher hasn’t called the president’s comments racist and voted against a resolution to condemn them.”

Gallagher instead criticized “mean tweeting” by anyone and tweeted the absurd suggestion that the Trump rally’s “send her back” chant was a reaction to anti-semitic comments by Rep. Omar rather than to Trump’s ugly insults about her.

The reality is Gallagher is a red-meat conservative who has voted with Trump on any issues of significance, including his yes vote to replace the Affordable Care Act and to the Trump tax plan, which delivers massive tax relief to the wealthy and has added an estimated $1 trillion to the deficit. He did so despite his campaign declaration that “Federal spending is out of control, leaving us with a national debt” that is far too high.

Gallagher also supports slashing Social Security benefits by setting a minimum benefit pegged to the poverty threshold of $950 per month, leaving all recipients at the edge of poverty.

Govtrack.us ranks Gallagher as one of the more effective House members in getting legislation considered, with seven of his bills making it out of committee and to the floor for consideration, which tied him for 20th best, well ahead of Ryan and Sensenbrenner, both tied for 101st, with two bills.

“Gallagher, one of Congress’s youngest members, sleeps in his office, works long hours and has health nut tendencies,” the story by McClatchey tells us.

He faces a classic old-fashioned Democrat in Stuck, now serving her third term in the Assembly. She’s a mother of four whose husband, David, is a union sheet metal journeyman, and Stuck tends to focus on pocket-book issues. In an interview with Wisconsin Public Radio, “Stuck said her own working class background helps her relate to residents in her district. She said 16 years ago, she was a single mother on welfare. In the years since, she worked as a rural mail carrier, a substitute teacher, school bus driver and other jobs as she put herself through college and graduate school,” as the WPR reported.

“My experience comes not just from advocating for my community in the State Assembly, but from raising a family and working multiple jobs to make ends meet,” Stuck’s campaign announcement noted. “Like many of our neighbors, my husband and I know the challenges families face from rising health care costs, high prescription drug costs, and an uncertain job market in our part of Wisconsin.”

Stuck was an opponent of the $4 billion state and local subsidy of Foxconn and has co-authored legislation to ban conversion therapy of LGBT people, to establish a loan fund to support paper mills, and to improve dyslexia education in schools.

Stuck told WPR the Trump administration’s trade wars are hurting Wisconsin’s farmers and manufacturers, and criticized Gallagher for failing to speak out against escalating tariffs. She also charged that Gallagher “voted to gut protections for people with pre-existing conditions and has done nothing to lower the cost of prescription drugs while pocketing tens of thousands of dollars from big pharmaceutical and insurance companies.”

In response to such criticisms Gallagher released a statement saying he has “spent every day working tirelessly to deliver results for hard-working families and job creators in Northeastern Wisconsin.”

Gallagher faced some of these attacks in 2018 from Democrat Beau Liegeois, a veteran and an assistant district attorney in Brown County who attacked Gallagher for voting to kill Obamacare, but the incumbent won reelection to a second term by 27 points, easily withstanding a blue wave election that swept out other Republicans.

Gallagher, however, is well-protected by a gerrymandered district, which went for Trump by 20 points in 2016. Only Duffy’s district, at 21 points, had a bigger margin among the state’s Republican districts. Still, Gallagher has exceeded that margin, winning the district by 25 points in 2016 and 27 points in 2018.

All of which leaves Stuck with an uphill battle. “It’s a tough challenge,” she concedes. But what keeps her going is the response from people. Again and again, she says, “I have people come up to me and thank me for running because of the health care issue.”