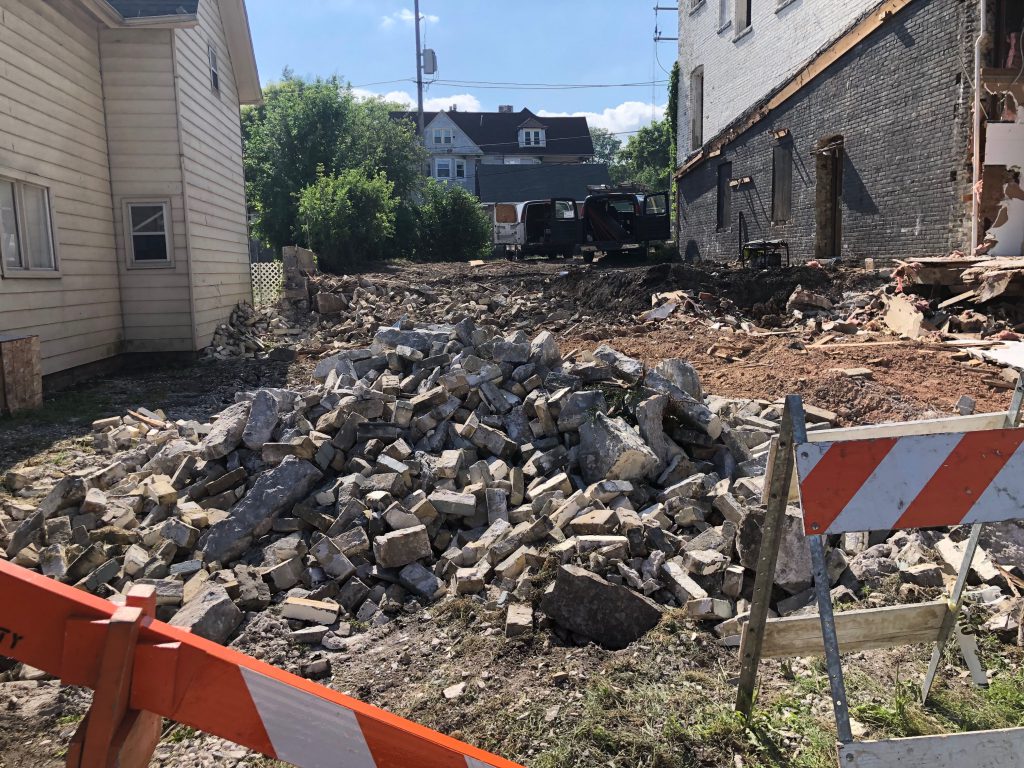 Demolition of the southern addition to the Humboldt Gardens building. Photo by Jeramey Jannene.

The heavily damaged south wing of the former Humboldt Gardens Schlitz tavern at 2249 N. Humboldt Ave. was demolished Tuesday by the city.

The move was undertaken even though two developers are planning to redevelop the rest of the structure. The city demolished the 375-square-foot addition as part of securing the structure before the developers take ownership, assuming they secure financing for the project.

A large portion of the wing’s brick facade collapsed in a wind storm in 2010 and was never fully repaired. Historic Preservation Commission staffer Tim Askin briefly described the state of the addition at a hearing on the potential redevelopment last week: “It’s bad and we will leave it at that.”

The city acquired the building through property tax foreclosure in March 2018 and listed it for sale, noting that the entire structure needed substantial repair.

Last week developers Todd Hutchison and Kyle Mack secured conceptual approval from the commission to convert the former brewery-tied house into three condominiums. The 7,798-square-foot building sits on the busy intersection of N. Humboldt Ave. and E. North Ave. at the south end of Riverwest.

Askin surveyed the condition of the building during the winter. “We could not go upstairs because there was an inch of ice on the stairs,” he said of a hole that is allowing water to fall directly into the building. Hutchison said it grew to six inches on the first floor.

Hutchison anticipates spending $150,000 to secure the facility, including a new roof and tuckpointing, and $58,500 to purchase the building, before advancing a full redevelopment plan.

“We have the concept. We don’t have the final details,” said Hutchison. “Meanwhile, while we sit here and talk water continues to pour into this.” He said a loose tarp sits atop the parapet, allowing water into the building.

The project has a budget of $1.2 million, with the three condominiums estimated to be able to sell for an average of $300,000. The application notes a $300,000 gap in project financing which would need to be overcome for the project to move forward. 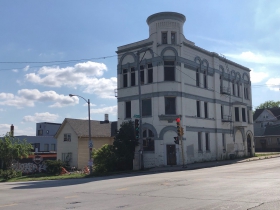 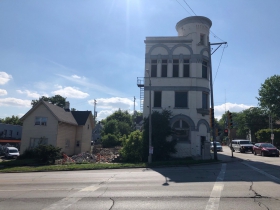 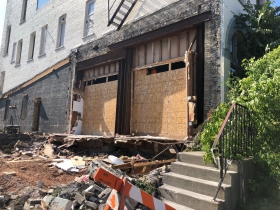 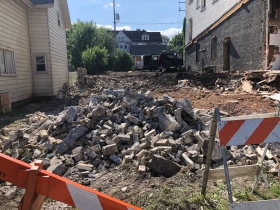 The partners propose to name the development The Kirchhoff after its original architect: Charles Kirchhoff, Jr. Kirchhoff was the frequent architect for the Uihlein family, owners of Schlitz. He designed a number of taverns for the brewery, including buildings still standing today at 322 W. State St. (Point Burger Bar), 1758 N. Water St. (DiModa Pizza) 1900 W. St. Paul Ave. (Sobelman’s Pub), 2053 N. Dr. Martin Luther King Jr. Dr. (On The Bayou) and 2414 S. St. Clair St. (Three Brothers). Like many of its peer taverns, the Humboldt Gardens building once had a large turret that rose from the circular structure found at the top.