The Milwaukee Water Works (MWW) continues to replace — slowly — the more than 75,000 lead service lines that connect homes and businesses to the city’s water supply.

Since January 1st, 2017, under three different scenarios the city-owned utility has mandated replacement of both the publicly-owned portion of the lateral that connects to the water main under the street and the privately-owned portion that connects to the building. When either portion has a leak or break, the entire pipe must be replaced. Similarly, if the utility disturbs or disconnects a lead lateral as part of work in the street, the entire thing is required to be replaced. The third scenario includes who is using the lateral: as part of the 2017 budget city officials funded a program to replace all 385 lead service lines in use at child-care facilities in the city.

“The goal is to remove all [lead] sources from the community,” said utility superintendent Karen Dettmer in a presentation Tuesday to the Common Council’s Public Works Committee. “There is no safe exposure to lead.” The three primary sources of lead poisoning are paint, water and soil.

The 2019 Milwaukee budget includes $12.4 million to fund the replacement of approximately 1,000 service lines. The city caps property owners’ out-of-pocket replacement cost at $1,600 spread over 10 years in the event of a break, while it spends $10,683 per lateral to pay contractors to replace the lead pipe with a copper one. 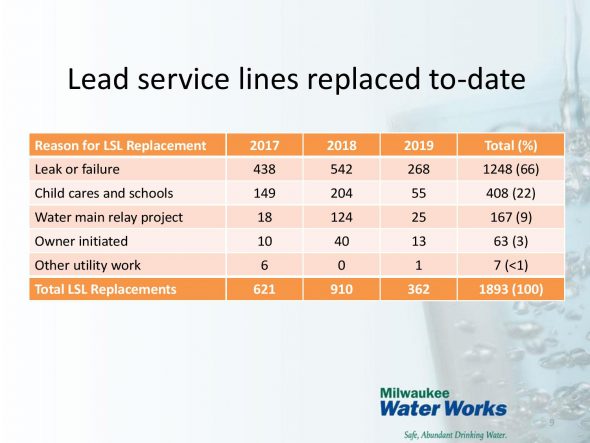 Most were replaced in 2017 and 2018, while 362 of them were done through June 30th of this year. “By the next semi-annual report we anticipate being much closer to that goal of 1,000 for 2019,” said Dettmer, which would bring the total completed to date to about 2,500. “We feel that we are on track to do that.” She said several water main replacement projects would add hundreds to the total.

The per-unit costs the city is charged by contractors through a bidding process are also falling. “We are slowly seeing those go down,” said Dettmer. “We anticipate those numbers to level out right around $10,000, hopefully a little less.” Dettmer said a new contractor that has begun bidding could further reduce the cost.

There won’t be any shortage of work.

A lot of lead service lines remain, especially in homes built prior to 1950. Approximately 45 percent of the properties connected to MWW have a lead service line. There are 75,403 with known lead service lines in Milwaukee, including 70,410 in residential properties. An additional 4,993 lead laterals are in commercial, industrial or publicly-owned buildings. 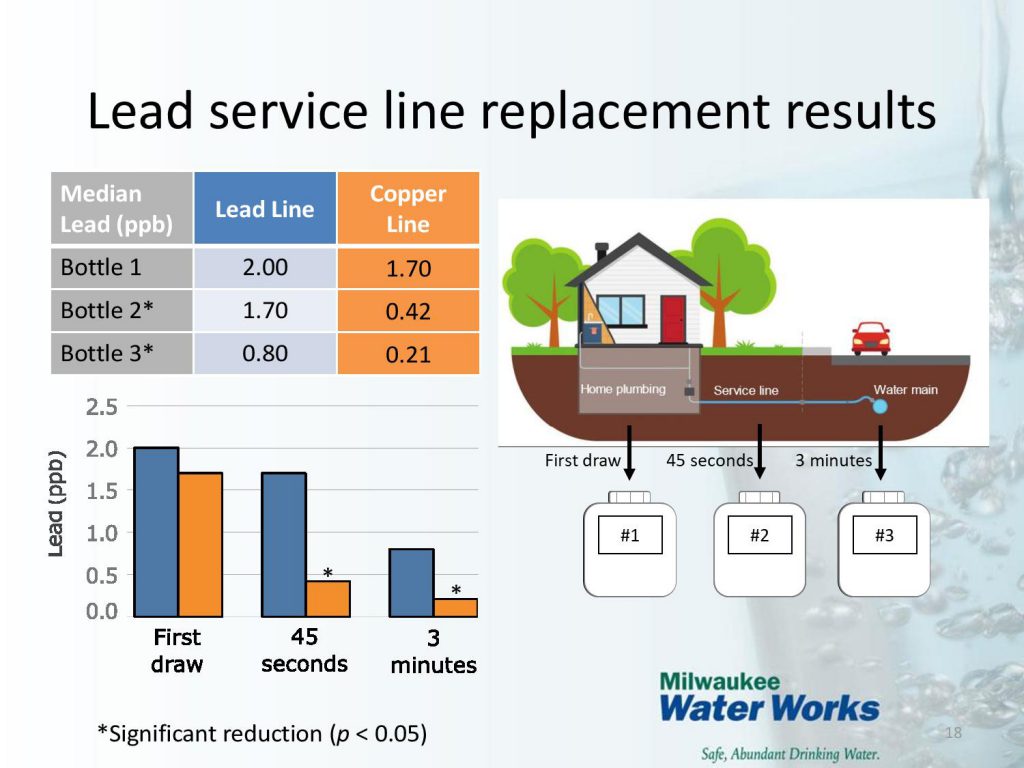 The city has relied on a corrosion control treatment since 1996 consisting primarily of orthphosphate that coats pipes to prevent lead leaching into water from service lines and interior fixtures. That process, which has reduced lead level readings by over 60 percent according to city reports, will be re-evaluated after new guidance was issued by the Environmental Protection Agency.

“We are going to test new treatments, alternative treatments,” said MWW water quality manager Lucas Beversdorf. “We plan to get a third party to really look at this fresh from the outside,” said Dettmer. The process was previously reviewed in 2002 and 2016.

Beversdorf told the council that MWW continues to struggle with participation in a free, voluntary program to test lead levels in water before and after a service line replacement. Of the approximately 10 percent of property owners that have participated, a statistically significant reduction in lead levels is found on samples drawn after the water has been running long enough to clear the water sitting in internal pipes.

Based on the study results, MWW additionally recommends replacing aging metal pipes and fixtures that could contain lead solder. Copper plumbing was allowed to contain lead solder until 1986 and is another contributor to water-borne lead alongside lead laterals.