New state record in 2018, up three-fold since 2015 GOP changes in campaign finance law.

By Wisconsin Democracy Campaign - Jul 2nd, 2019 12:05 pm
Get a daily rundown of the top stories on Urban Milwaukee

Contributions from special interest political action committees (PACs) and corporations soared to a record of more than $27 million in 2018, a Wisconsin Democracy Campaign review found.

PAC and corporate contributions nearly tripled in 2018 from the $9.1 million in PAC contributions in 2014. The 2014 and 2018 election years are comparable because both featured legislative and high-profile statewide races for governor and attorney general. 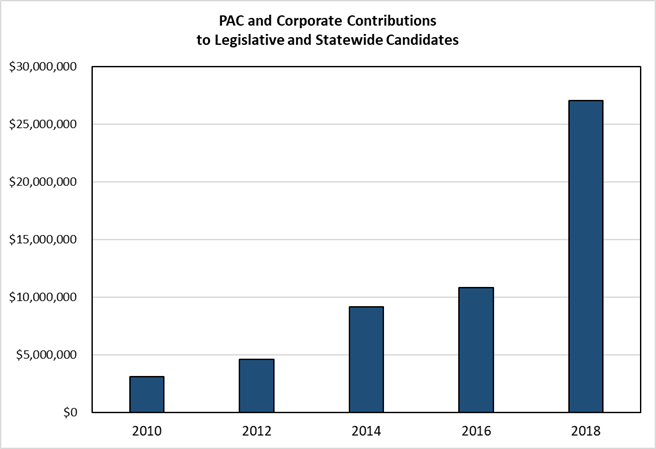 PAC and Corporate Contributions to Legislative and Statewide Candidates

The huge jump is a result of changes in Wisconsin’s campaign finance law in 2015, which were pushed through by the Republican-dominated legislature and signed by Gov. Scott Walker.

The top recipients of the PAC, political party, candidate committee, and corporate contributions in 2018 were:

Committee to Elect a Republican Senate, more than $1.1 million;

The largest special interest PAC contributions in 2018 came from:

The largest corporate contributions in 2018 came from: