The County’s Queen of Hemp

Why Supervisor Sylvia Ortiz-Velez is pushing so hard for county to grow hemp. 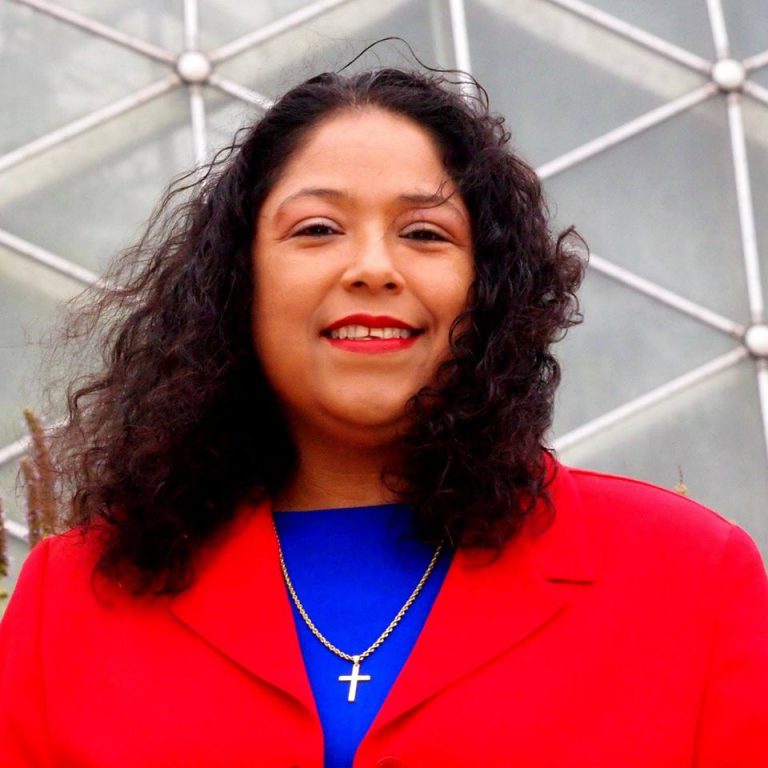 In 2018, a new county supervisor, Sylvia Ortiz-Velez gains access to the inner workings of Milwaukee County and finds a government that is broke.

The county parks system, a sacred cow for supervisors and residents alike, is in the worst shape it’s ever been. Being the supervisor from the 12th district, where the Mitchell Park Domes are located, she is given a seat on the task force that’s supposed to determine the future of the dome. They need repairs, but there is no money for repairs. So this freshman supervisor asks all of Milwaukee County, ‘What if we grow hemp in them?’

The proposal sends a shock wave through the county. The prospect of the government getting involved in the hemp business isn’t just a novelty idea, it also has the aura of vice, given hemp’s botanical relation to marijuana. Which brings with it a swarm of press coverage. Ortiz-Velez notices this, and, being in politics, she also notices that the attention she is getting doesn’t please all her colleagues. “I’m sure that half the electeds in town would jump in front of a bus to get the media attention I’ve been getting,” she says, in an interview with Urban Milwaukee

Sylvia Ortiz-Velez is a Milwaukee native, who grew up on the South Side, on 11th and Arthur Avenue in Lincoln Village. She’s an alumni of Morgandale Elementary, Hayes Bilingual Middle School and Bay View High School. Growing up she spent time at Kozy Community Center. Her father was an Evangelical minister and her mother a nurse. She has seven brothers and sisters, a number of them still living in the neighborhood.

Ortiz-Velez considers herself a problem solver with no interest in the “high school drama stuff” that can arise politics. She’s a “workaholic”, she says, who gets it from her parents. Both of whom are “technically” retired, but still working at some level in their professions.

She does seem busy. In 2002, she got a real estate license and started networking to chum up business. But as she did this, she says she started hearing more and more about the problems and political issues faced by the people in her community. “That’s how I got involved in volunteering in my community.” Soon she got her feet wet in politics, volunteering for Ald. Jim Witkowiak’s 2004 re-election campaign. She was a founding member of the Latino Caucus of the Democratic Party of Wisconsin. She went to UW-Milwaukee and received a bachelors in Political Science in 2009.

Then in 2012, she ran for District 12 Supervisor, and lost. “It’s hard losing, it’s really hard. But during that time I actually met the most wonderful person I’ve ever met. And I got married, and it was the best five years of my life.” That was Andres Velez Moreno. Velez Moreno practiced law for more than 20 years on the South Side. But in 2016, he passed away due to complications with his health. The firm bearing his name, Velez Moreno & Vargas still runs out of an office at the corner of 11th and Greenfield Avenue.

Ortiz Velez met Vargas for the first time a week after losing her election in 2012. “So, actually, me losing was the best thing that ever happened to me, honest to god.”

In the year after her 2012 election loss, Ortiz-Velez made news when she called out the Milwaukee Metropolitan Sewerage District (MMSD) for its handling of asbestos at a work site on the Kinnickinic river. MMSD was tearing down homes along the river to widen the basin to reduce flooding, but some of the homes had asbestos. Ortiz-Velez saw workers smashing tiles on the ground, sending clouds of asbestos into the air. She, along with the local residents and Alderman Jose Perez, got the MMSD’s attention. MMSD fined some contractors and even banned one from ever working on MMSD projects. “Wherever I go I like to solve problems,” she says.

Fast forward to August 2018. Ortiz-Velez has served on the county board for a few months. Already, it’s clear the county has a serious fiscal problem: state shared revenue and state aids are not keeping pace with inflation, despite the county sending more money to the state each year. “I was shocked, I was shocked ya know,” she said. “They have a budget that’s built for inflation, that’s built for growth. And we’re expected to operate with one that doesn’t. From a financial point of view, it makes no sense”

These trends have contributed to an annual operating deficit of $12.8 million for the county and a projected $80 million structural deficit by 2023, as Urban Milwaukee has reported. Not to mention a projected capital backlog totaling nearly half a billion dollars.

That’s countywide. When Ortiz Velez looks into her own district, she finds Kozy Community Center in need of capital maintenance, a National Avenue corridor that needs more bus stops and Mitchell Park Domes, a county treasure, facing an imperiled future. “I’ve been going there since I was a little kid,” she says. “I have memories. It’s one of the very few places that you can go to in Milwaukee and actually see the population. And it’s affordable so all different price range of people can go there.”

The county will likely have to bond for the repairs of the domes. But reports by the county comptroller, and more than one private contractor, have shown that the domes have a revenue problem outside of the county’s own financial woes. More than 80 percent of their revenue comes from ticket sales. So, without changing the business model, the only way to raise revenue is to raise the cost of admission.

So, Ortiz-Velez is on the task force, she’s on the parks committee, and in the summer of 2018 she is touring the domes and sees the Mitchell Park greenhouses for the first time. And it occurs to her that these could be an untapped potential for revenue by growing hemp.

So Ortiz-Velez sponsors a resolution asking the parks department to study the revenue potential of the idea. That report comes back in April 2019, and it concludes the county should not pursue this. Its estimates for revenue are slim.

Ortiz-Velez disagrees and disputes the report’s findings at a committee hearing. As did state Sen. Lena Taylor (D-Milwaukee), who brought a consultant from Colorado to also dispute the findings. The consultant, Patti Zanin, told the committee, “I think you guys need a lot of help,” referring to the numbers in the report.

The resolutions she’s working on will specifically propose that Milwaukee County develop a program to certify hemp seeds and clones using a 5,000-square-foot greenhouse. Ortiz-Velez still believes this could generate significant revenue for the county, and perhaps, help fund the repair of the Mitchell Park Domes. And become a dedicated source of revenue for the ailing parks system.

“With no money what am I gonna do, go beg every year for one item or a little here, maybe I get a crumb here, a little crumb there for my park and it just keeps getting worse,” she says.

In her first year as a supervisor, Ortiz-Velez has picked a tough battle — and gotten a sobering look at the legislative process. “Ya know, no. I’m not enjoying it,” she says of that process. She has learned that making things happen in government is a game of chess that can play out in years. “I think government needs to move a lot faster.”

Her battle has also won her some unexpected allies. Like Republican-leaning conservative Sup.Deanna Alexander, who has voted with Ortiz-Velez on all her hemp-related resolutions. “Deanna Alexander has been nice and kind and wonderful to me,” she says. “I am a Democrat. But there are things we agree on.”

Ortiz-Velez has praise for other colleagues, too. Like Sup. Steven Shea: “Anytime, I need his ear to ask him about anything or just talk to him about anything, he’s there.” And Sup. Marcelia Nicholson: “Marcelia has been a wonderful. She’s been just awesome.” Sup. Willie Johnson, also, “Awesome.” As is Sup. Sheldon Wasserman, for whom Ortiz-Velez’s sister worked for approximately 15 years.

And despite Ortiz-Velez defeating former Sup. Peggy West, an ally of board Chairman Theo Lipscomb, she notes he has never shown any animus. “When I do call the chairman and I need his advice, he will sit down with me and give me his advice.”

The 2018 election made the 12th district a political spectacle. “At one point I think everyone in town was talking about my former opponent.” First, there was the massive amount of money that County Executive Chris Abele’s Leadership MKE threw into the race, much of it targeting West with attack ads. “It was the first time I had seen anything like this,” Ortiz Velez says, and it generated complaints from residents about all the political mailers filling their mailboxes. Notably one of them attacking West’s intelligence with a quote from her incorrectly stating that Arizona was not on the border with Mexico. On this misstep by West,  Ortiz-Velez says, “Everybody has bad days. My god, I mean, when you have like 20,000 meetings in a day, you know, it’s like, ok you didn’t have enough caffeine in your coffee.”

Then, on top of the massive campaign spending by the sitting county executive, came charges of election fraud against West. Ortiz-Velez and her campaign filed a complaint after some of the signatures on West’s nomination papers raised red flags. Eventually, West was charged with election fraud when investigators found that some of the signatures were, in fact, bogus. She pled guilty and received 2 years probation.

Ortiz-Velez offered some initial comments following West being charged and her sentencing, but for the most part tried to lay low. “I really wanted to run for office so that I could solve problems,” she says.

“What I’m really fighting for is: all the kids that play in the parks,” she says. The county needs to start getting creative about ways to generate revenue, she says. The county has beer gardens and private partnerships, it sells parks merchandise and accepts donations. Why not sell hemp, too?

Shops that sell products containing CBD, a hemp derivative without the psychoactive effects of THC, are sprouting all over Milwaukee and the state. And, according to Ortiz-Velez, a lot of the certified clones and seeds are coming from elsewhere. Eventually, someone else in Milwaukee is going to see this opportunity, Ortiz-Velez says, and fill this role. The revenue potential of this, she estimates, could be in the millions of dollars once such a program is up and running. “I want Milwaukee County to benefit.”

All the pieces are already there for the county to get into the hemp business, they just need to be assembled, she believes. The opportunity is there.

“I can see it as clear as day now,” she says. “Pun intended, the smoke has cleared.”