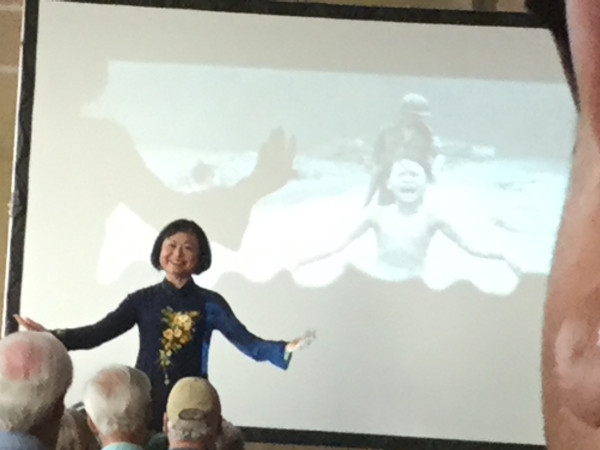 Forty-seven years ago today, Kim Phúc, then nine-years old, ran down a road near her village in South Vietnam, following an aerial napalm attack, and AP journalist Nick Ut took a photograph. The photo from June 8, 1972 will make the front page of newspapers within 24 hours, and Ut is awarded the Pulitzer Prize. Recently Phúc and Ut gave a presentation on the UW-Madison campus.

Phúc held her audience with each word. From memories of a sunny morning in her village, to the horror that ended her childhood, and then a many-year process of finding ways to release anger and sadness at those who had inflicted the war on her village, the audience sat in rapt attention. Following the napalm attack Ut will place his camera down, race to the child, and get her to the hospital in his car.

After more than a dozen surgeries, and laser treatments for flexibility of the skin, as recently as a few years ago, Phúc says she never stopped smiling and laughing –like the girl she was prior to the military strike. It would be easy to see how the pain could have also seared her soul. But at a certain point she knew there had to be a way to seek an avenue for forgiveness and move on with life.

Part of the healing came from a loving husband, two grown college-educated sons, and adorable grand-kids. But the other part came from finding God and basing her life in faith that lifted her over the pain and anger.

In a filled room of the Pyle Center sat a man about 70 years of age, just off to the left of me. Tears rolled down his cheeks as she talked. There was silence at times in the large room which was stunning, given the number of people packed in side by side.

But there were also moments of laughter. Many years ago Phúc was told she would be on the Oprah Show. She was so pleased to do a television program. But then she asked, “Who is Oprah?”

Oprah found that story funny and cried when hearing it.

The evening was, in many ways, about restorative justice. She met with a pilot who was a part of the bombing raid that landed napalm on Phúc’s village. The two have met and still keep in contact. The video footage of them first meeting and talking was touching and humane in a way that defies my ability to describe it. 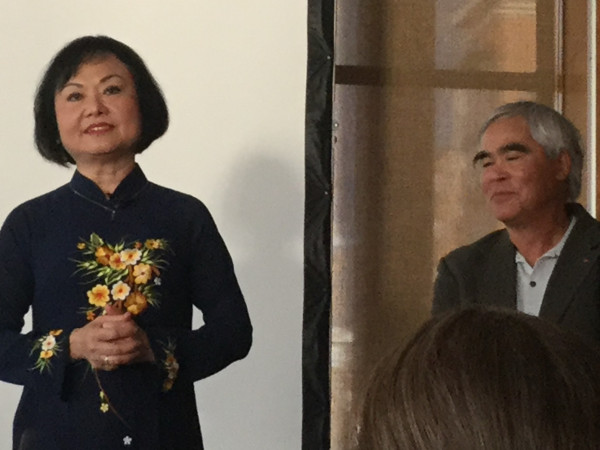 Ut reminded me of someone who could pull up a chair and start reminiscing without missing a beat.  There is no doubt the man has a professional sense of what makes for a news photo which conveys so very much with nary a word needed. The many photos shown to the crowd had the war-torn qualities that can sum up the dreadful policy moves that several American administrations continued in Vietnam.

During the question period I asked if Phúc ever met Henry Kissinger, and if so, had she forgiven him?  I was hoping for an opening that would broaden the discussion. But she kept to her talking points about forgiving everyone and reiterated her words of faith.

Dan Young, one of my longest running friends in Madison, joined James and myself at the Center.  Afterwards he got both signatures on a First Day postcard. He wants my readers to know the XX are–as Phúc told him–kisses. 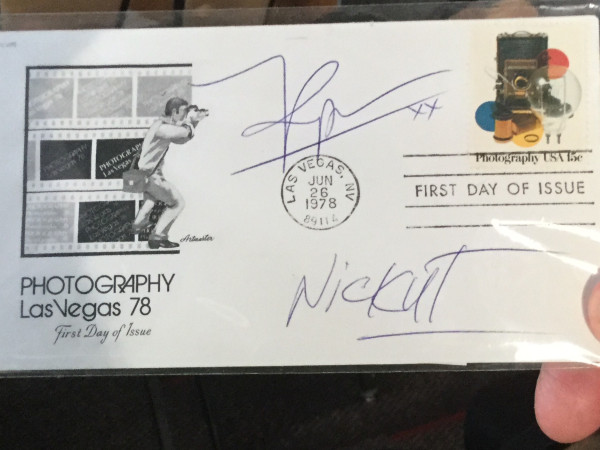