Don't fear the deer's fountain. Yet another Bucks effort to activate their downtown plaza. 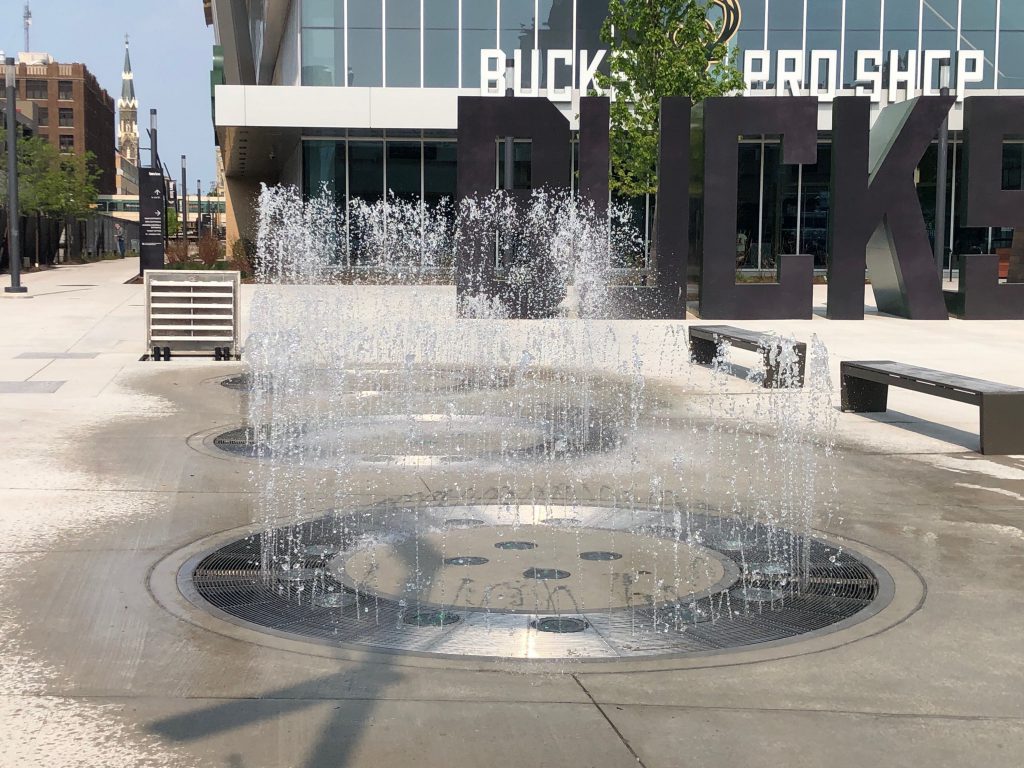 The Fountain at Deer District. Photo by Jeramey Jannene.

As part of their plan to turn the area around Fiserv Forum into a year-round destination, the Milwaukee Bucks continue to roll out enhancements to the plaza and entertainment block.

The latest such feature is three fountains at the south end of the plaza.

Team president Peter Feigin, dressed in swim trunks with a towel draped over his shoulder, welcomed the media to the water feature, which is part art, part splash pad. “This will be an unbelievable display,” said Feigin moments before the jets were turned on and he took off on a ceremonial lap.

The fountains are capable of shooting water up to 10 feet in the air. But the system, built by Hunzinger Construction, also has a wind sensor to reduce the height if the wind is too strong. This helps keep the system “self contained,” meaning it recirculates water instead of constantly drawing new tap water.

Should you find yourself longing for the days of running through the sprinkler, or simply in need of a way to distract your kids, the fountains will run daily until Labor Day from 10 a.m. until 5 p.m. The team is planning kids programming every Tuesday throughout the summer.

They’ll also be on in the evening, complete with uplighting, for special events.

Will the fountains draw people in? It looks like it. Moments after the press conference ended a couple walking around the area stopped to have their photo taken in front of the fountain and the monument sign.

The team has a host of summer plans to draw people to the area now that the Bucks’ basketball season is over. Now known as the “Deer District,” there is something planned for the plaza and entertainment block virtually every day of the summer.

Mondays include a 7:00 a.m. bootcamp and 7:00 p.m. Bachelorette watch party. Tuesday includes yoga in the morning and “Movies under the Moonlight.” Wednesdays feature morning fitness classes and a new music series in the evening. Thursday again features yoga in the morning, but with Zumba in the evening. Sprinkled in between are a host of other events, including watch parties for the Women’s World Cup starting June 12th. A full list of events is available on the Deer District website. 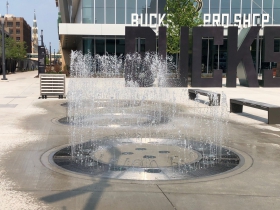 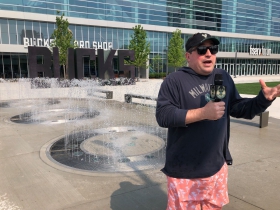 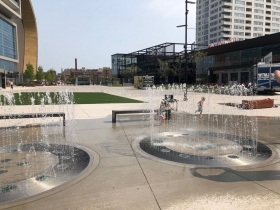 The Fountain In Action