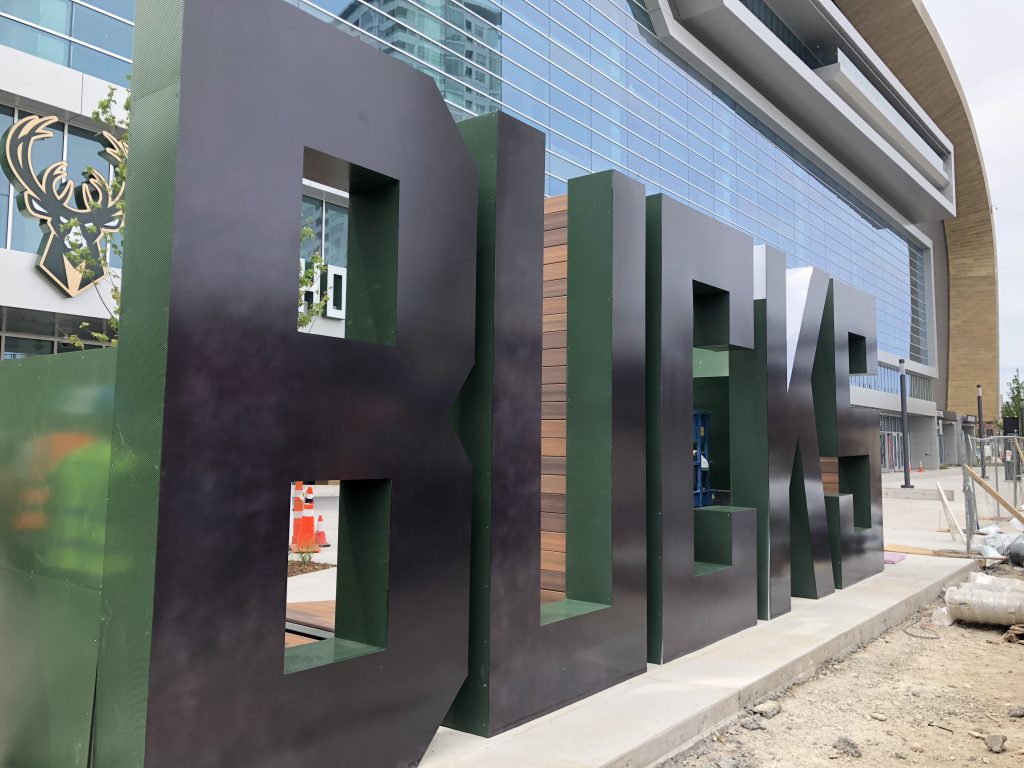 BUCKS monument sign in front of the Wisconsin Entertainment and Sports Center. Photo by Jeramey Jannene.

The first piece of the plaza outside the Wisconsin Entertainment and Sports Center was formally unveiled Thursday afternoon. The Milwaukee Bucks held a ceremonial lift of the final 12-feet-tall, six-feet-wide letters for the media, completing the 10-ton BUCKS sign that stretches 33-feet wide outside the new arena.

Each letter is approximately eight feet deep and includes benches for people to sit or stand on. The sign stands parallel to the glass-covered east wall of the arena, facing east towards the entertainment center the team’s real estate affiliate is constructing. The plaza is formed out of land that was formerly N. 4th St.

Bucks President Peter Feigin said, “this will really be the destination for people to come to.” He characterized the sign as a logical gathering point for people coming to the arena or a place of interest for those just visiting the plaza.

The sign is intended not just as a daytime gathering point. The letters on the sign can light up at night, displaying a broad array of colors.

Point guard Malcolm Brogdon was on hand to witness the installation. “To me it’s very Wisconsin, it’s very this culture, this city,” said Brogdon about the arena’s design. Brogdon, who is nicknamed “The President,” is splitting his time this summer between Milwaukee and his home in Washington D.C. The 25-year-old is a 2016 graduate of the University of Virginia.

The sign was designed by Chicago-based Selbert Perkins Design and fabricated by Jones Sign Company of De Pere. It’s made of steel tube, “faux rolled steel,” aluminum, perforated metal and other composites according to a project fact sheet.

Plans for the monument sign were first released in February 2017.

The City of Milwaukee provided $12 million towards the construction of the plaza as part of the city’s $47 million contribution to the arena’s $250 million public financing package. The arena complex, excluding the entertainment center, has an estimated construction cost of $524 million.

As Urban Milwaukee reported two weeks ago, green fire hydrants will surround the arena alongside the massive green sign.

Feigin declined to provide an update on the team’s negotiations regarding naming rights for the new arena at Thursday’s event.

The arena was 95 percent complete as of mid-May. A countdown clock within the construction offices reads 46 days, 15 hours until tipoff, which would place the arena’s official opening on July 31st. The team, which has announced a variety of entertainers for the arena’s first year, has yet to announce the opening act for the building. 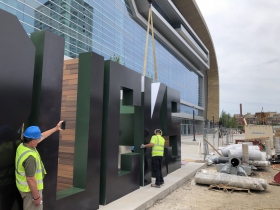 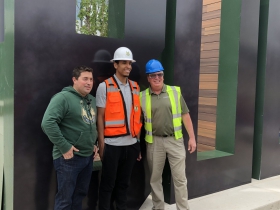 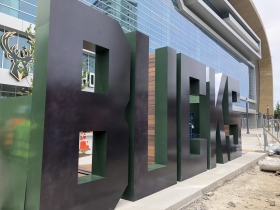 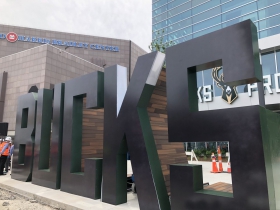 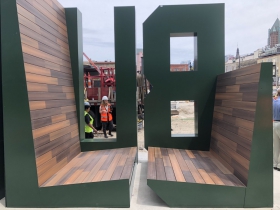 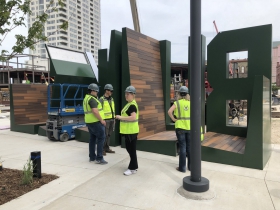