“On Belonging” asks hard questions about history and belonging, but with great beauty. 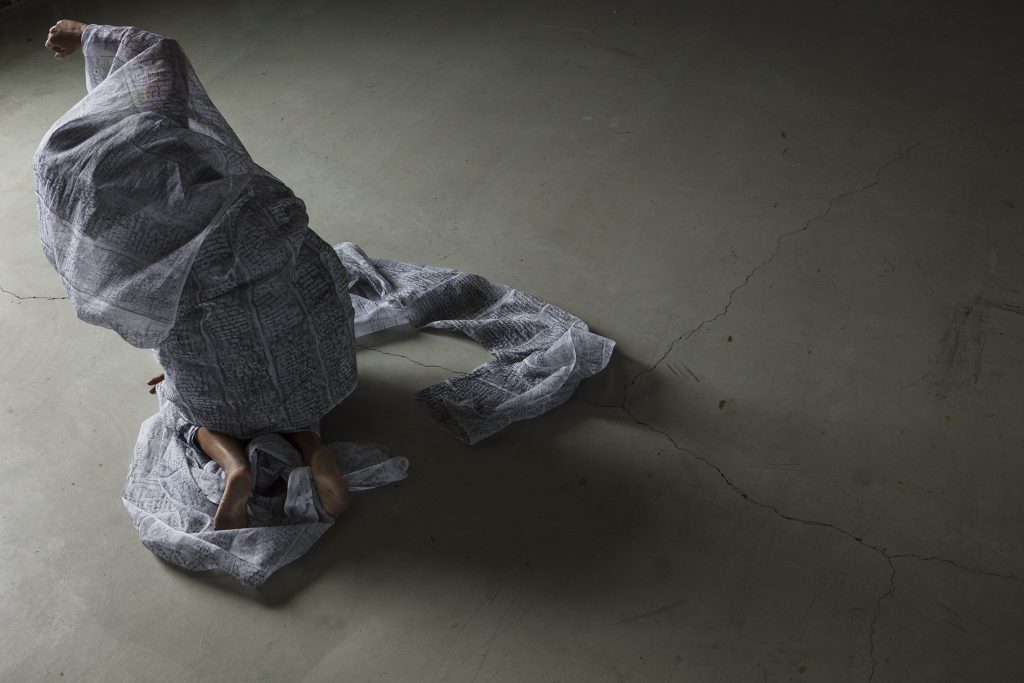 Untitled X, 2017 from What is Recorded/ What is Remembered, 2017. Photo by Lois Bielefeld and Nirmal Raja.

Wrapped in 30 yards of white cotton, organdy fabric, Chennai-born artist Nirmal Raja disappears into a historical cocoon. With the understanding that history has been written by its victors, mainly white males, the artist choreographs a struggle with the past that has largely ignored women and people of color. We witness her working to unravel it through the sensitive lens of Milwaukee-born photographer Lois Bielefeld in their show, “On Belonging” at The Warehouse.

The show contains several different elements. First, the series of photographs of Raja unwrapping herself which are hauntingly beautiful, basked in warm light. The stark, shiny concrete floor in the photographs reflects the unwrapping, its cracks and pits like a landscape seen from above, contrasting with the artist’s body as it emerges. There is also a timeline, based on the one carved into the wooden boards of Milwaukee’s Riverwalk, which inspired Raja to create this piece, which took her 50 hours. Each word was spoken as it was transferred onto the fabric with a large black crayon like a rubbing on a gravestone, which adds the weight of history to the fabric from which she emerges.

The words were also recorded and used in “Like A River”, a video performance at the center of the exhibition comprised of nineteen woman of various backgrounds performing movements and actions that visualize history as a scrim which connects and divides, conceals and reveals. 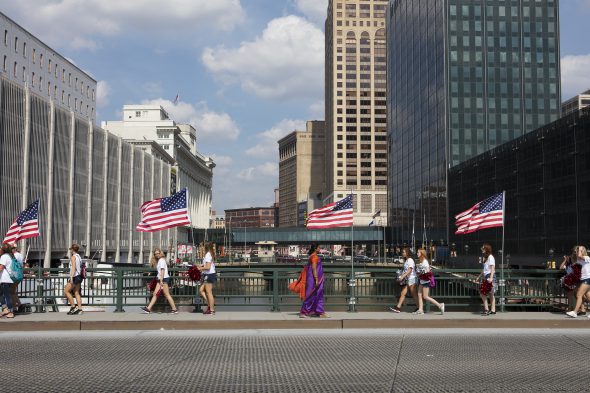 But that is only first half of the show, you might call it the chrysalis state, of the year-and-a-half-long collaboration that makes up this exhibition. Part 2 shows Raja metamorphosed, dressed in multiple colorful saris in different Milwaukee locations and spreading her wings (she said it took much courage to be photographed in traditional garb in public without the consent of the people going about their day). Bielefeld’s normal working practice consists of a highly orchestrated composition with controlled lighting and curated positioning, slowly built and edited. Here we see Bielefeld working alla prima, shooting from the hip, using the light and people in their natural environment, as direct and exposed as her subjects. It shows her masterful eye for color and composition and her ability to capture moments of serendipity. Some photos show Raja in churches of different faiths like the Sikh Temple of Wisconsin and St. Joseph’s Chapel, but it doesn’t matter the creed, each one of these photos feels sacred, familiar yet otherworldly. In the work, there is a sense of vulnerability. The energy between Raja and Bielefeld is electric and is heightened because, for the most part, the bystanders are unaware that they are the backdrop of this social experiment in a time of increased political unrest in a city that still struggles with issues of segregation. Each photo is large and uniform in size, which makes them feel like pages taken from a giant book. Places I recognize: The Oriental Theatre, State Fair Park, Bradford Beach and the Milwaukee Public Museum take on new life though Bielefeld’s masterful eye and Raja’s quiet, calm presence; her gaze transcends ethnicity as it invites and questions us.

Raja has lived in Milwaukee for 27 years, but when dressed in her Sari do people take her as someone who belongs? In the photo “Downtown-Sari 18” we see Raja walking over a bridge with downtown Milwaukee in the background. Four equally spaced American flags are blowing in the wind above, and her purple and orange Sari contrasts with the red, white and blue, but all the fabrics are blown by the same wind. She walks in the opposite direction of the wind and equally spaced white, female, uniformed students walk past her. What I am struck by is that there is not a clash but a harmony: red, white and blue mixing to create purple. When asked if they were questioned or harassed during their collaboration, the artists said they were not.

The words on the Riverwalk timeline are fading with each Wisconsin winter, many are now illegible and I wonder if they will someday be replaced with a more balanced account of history. This show gives me hope that the world is changing for the better as we become more aware, more accepting and more inclusive so that all people, no matter their race, religion or gender, may feel a sense of belonging.

“On Belonging,” through May 31 at The Warehouse exhibition space, 1635 W. Saint Paul Ave.

One thought on “Visual Art: Bielefeld and Raja Take on Big Issues”