State Sen. Patrick Testin could be the key man in the success or failure of proposal. 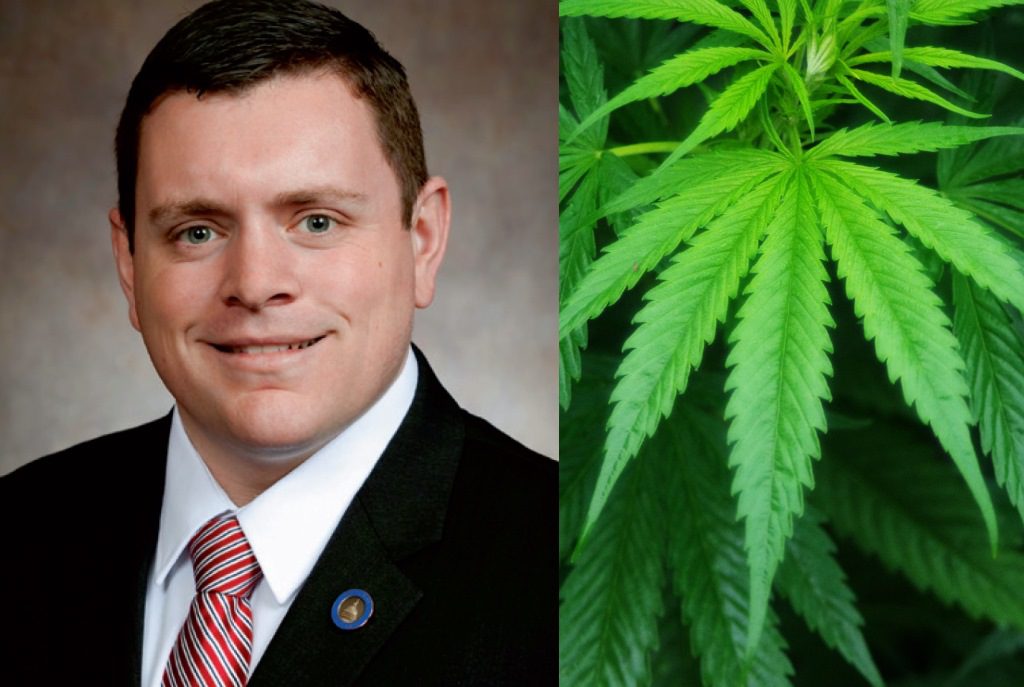 State Sen. Patrick Testin (R-Stevens Point, is “a pro-life, pro-family, pro-gun conservative who will empower families make the important decisions, not the government,” as he promised in his 2016 campaign for election.

He also favors a proposal to legalize medical marijuana.

The fact that such a staunch conservative Republican feels this way speaks volumes about how voters have changed their views in Wisconsin. The last Marquette University Law School poll showed that 83 percent of respondents favored medical marijuana, including 96 percent of Democrats and 68 percent of Republicans.

“The debate on this has changed dramatically in the last 10 years,” Testin tells Urban Milwaukee. “Given the fact that 33 other states have adopted medical marijuana, I think there’s an appetite for this among the public in Wisconsin.”

Or as Dr. Michael Miller, an addiction psychiatrist at Rogers Memorial Hospital in Oconomowoc and past president of the American Society of Addiction Medicine, put it at a recent conference on medical marijuana: ”I think stopping the marijuana reform train is impossible in this country.”

Except perhaps in Wisconsin, where all trains run through the gerrymandered, Republican-controlled Legislature, and which has already removed a proposal on medical marijuana from the budget proposed by Democratic Gov. Tony Evers.

To be sure, there was a valid legislative reason, to strip a policy item with no fiscal impact from the budget. Evers proposal, moreover, included language to decriminalize possession of small amounts of pot, which some Republicans adamantly oppose.

Sen Alberta Darling (R-River Hills), condemned Evers proposal, which wasn’t even full legalization (an idea supported by 59 percent of state voters, the MU poll found) as “off the wall scary.” Testin offers a less hyperbolic view: “I’m not there on recreational marijuana yet.”

But Testin is the rare Senator who actually holds a swing district, something Republicans did their best to banish with their 2011 gerrymandering plan. Testin narrowly defeated Democrat Julie Lassa in 2016.

Most Republicans in the Senate hold safe seats and are dominated by an ultra-conservative group of GOP senators, a “Murderer’s Row for liberal and moderate ideas,” as Urban Milwaukee columnist Steve Walters once described them. And they’re led by Senate Majority Leader Scott Fitzgerald, who has long opposed medical marijuana.

The Republicans hold an 19-14 majority in the Senate, so even if Testin and every Democrat votes for medical marijuana, they would need to convince two more Republicans to vote yes. “We still face a hard road in the Senate,” Testin says.

That’s despite the fact that medical marijuana is not some complicated policy that only Capitol insiders grasp, but a hot button issue that is easily understood, and has been embraced by the vast majority of Americans.

“I’ve held town halls across my district and a lot of people come to me and ask about medical marijuana. Often they are people who suffer from cancer, chronic pain, and other medical conditions,” Testin says.

Testin’s grandfather had lung cancer and self-medicated with marijuana, which helped keep up his appetite and kept him alive longer, the senator has publicly and movingly testified. “It gave him time he otherwise would not have had, to spend his last few months with his family.”

“I can’t tell you how many veterans have told me in confidence they smoke marijuana” to deal with post-traumatic stress syndrome or other pain they suffer, Testin says. Yes, they can get a prescription for opioids, but they don’t work as well and have side effects including possible addiction. “I think it’s unfortunate that we have men and women who have served our country and have to breka the law to get the relief they need.”

“I do see medical marijuana as a potential alternative to get people off opioids and give them a safer alternative,” Testin says.

Interestingly, the Wisconsin Medical Association opposes medical marijuana. Their lobbyist Mark Grapentine argues that “medical marijuana” is a misnomer, because there hasn’t been enough research on marijuana’s impact for doctors to prescribe it as medicine. That’s because the federal government still classifies pot as a Schedule 1 drug, which has made it difficult to do large scale national testing. In fact, under federal law it is currently illegal for physicians (even in states where medicinal marijuana is legal) to prescribe the drug though they can write a recommendation for marijuana. (Grapentine’s group recommends that the federal government de-classify pot as a Schedule 1 drug.)

But there has been some research done on marijuana as a pain reliever and alternative to opioids and it’s pretty compelling. The National Academies of Science, Medicine and Engineering found “strong evidence” showing marijuana can reduce chronic pain in adults. “Across numerous trials and experiments, the report found, people treated for pain with marijuana were “more likely to experience a significant reduction in pain symptoms” compared to a placebo,” as the Washington Post reported.

In Colorado, after marijuana was legalized, “opioid-related deaths decreased more than 6% in the following 2 years,” according to research published in the American Journal of Public Health. And according to a 2014 study in JAMA Internal Medicine, “states with medical marijuana laws between 1999 and 2010 saw, on average, about 25 percent fewer opiate overdose deaths than states without such laws. What’s more, the effect of a medical marijuana law appeared to grow over time — more lives were saved each additional year after the laws’ implementation, suggesting an effect from more people taking advantage of the programs,” as the Post reported.

And a National Bureau of Economic Research working paper “found that the presence of medical marijuana dispensaries in a state was linked to a 15 to 35 percent decrease in admissions to substance abuse treatment centers, along with a similar decline in overdose deaths.”

There’s also evidence that doctors, whose prescription of opioids has helped fuel the addiction crisis, changed their behavior after medical marijuana was legal. One study looked at what happened to Medicare Part D painkiller prescriptions and found “the typical physician in a medical marijuana state prescribed 1,826 fewer painkiller doses for Medicare patients in a given year.”

This kind of information could be pretty powerful at a legislative hearing, but Republicans have made sure that doesn’t happen. That could change now that Testin “has replaced a medical marijuana critic, Leah Vukmir, as chairman of the Senate health committee,” the Wisconsin State Journal has reported. “That means it’s likely the medical marijuana proposal will get a hearing this legislative session, which hasn’t happened since 2009.”

Testin is working with a bipartisan group of legislators, including state Rep. Mary Felzkowski (R-Irma), a cancer survivor, Sen. Jon Erpenbach (D-Middleton), and Rep. Chris Taylor (D-Madison), on creating a medical marijuana bill. Erepenbach has been introducing a bill for 10 years now, only to encounter a GOP stone wall. “Republicans need to get on board and support the people of our state who want this to happen,” Erpenbach says. “People should be not treated as criminals for accessing a medication that works.”

Testin expects the proposal to be included in a free-standing bill after the budget is passed, probably in the fall. “It will have to be “fairly toughly written,” he notes, to assure Republicans it will not open the door to full legalization. And perhaps with a full public hearing and debate on the issue, he could change some minds. “I’m at least optimistic,” Testin offers guardely, “with the discussions we’re having in the Capitol.”